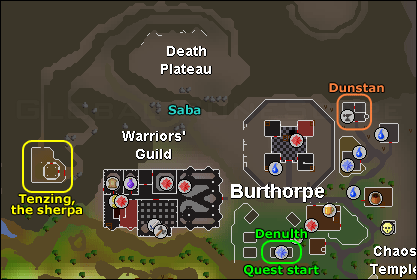 1. Talk to Denulth to start the quest. He tells you that you need to find another way up to the Death Plateau and to find the combination the guard lost.

2. Go to the castle which is north in Burthrope, and go upstairs.

3. Talk with Ehoric, and talk to him. Say "I'm looking for the guard that was on last night." He tells you that there was only one guard, Harold, which can be found in the Toad and Chicken Inn.

4. You will see the inn once you've left the castle. Go upstairs in the inn, and go to the west room.

5. Talk with him, and ask: "You're the guard that was on duty last night?". Then he will tell you that he don't want to talk about it.

6. Go back to Eohric in the castle. He will tell that Harold will open up after a drink.

7. Go back to Harold and give him an Asgarnian Ale. If he's not drunk, you should give him the Blurberry Special too.

8. Now gamble a few times until he give you an IOU. Read it, and you will find out that it is the combination. This is what it says:

9. This is the solution:

Go to the castle and place the stone balls on the Stone Mechanisms.

10. Follow the path north-west from Burthrope. You will see a cave. Enter it and speak with Saba.

11. To find Sherpa, go up to the Death Plateau, and you will see a wounded soldier.

12. Go west, and you will come to a small path which goes south. Go on that path untill you find Tenzing. Talk to him, and ask for his help. He want 10 loaves of bread and 10 cooked trout and some spiked boots in return to help you.

13. To get the spiked boots, talk with Dunstan. He can be found east of the castle in Burthrope. He will make them under one condition:
His son wants to join the Imperial Guard. The Prince's elite forces are invite only so it's very unlikely he'll get in. If you can arrange that, you have a deal. In addition, you have to bring him an iron bar so he can make the boots.

14. Talk to Denulth (where you started the quest) and tell him that you have found a new path, however it will only be shown if you get the boots to the sherpa, and everything you have gone through. He will make an exeption and give you a certificate to accept Dunstan's son into the imperial troops. Now, just go back to Dunstan and give him the certificate, the boots and the iron bar.

15. Now, go back to Tenzing and give him the supplies (10 breads and trouts) and the boots. Tenzing will give you a map of the secret area. You will need to check the path before tell Denulth about it. Go north of his house, in the chicken farm, and climb over the stile and walk up the path. When you see a message saying it's safe, just go and talk to Denulth to complete the quest.