Slayer is a members-only skill. In this skill, a slayer master gives you a task that you will have to complete. The task is to kill a certain monster, and they can be in all levels. From the easiest slayer masters, you can be assigned to kill a few goblins, while the hardest can give you tons of dragons to kill. The XP you get, is usually 1/10 of the monster's life points. Also, if you're assigned to kill Giants, you can kill everything with "Giant" in its name: Hill Giant, Moss Giant etc. So, if you're assigned to kill goblins, you will get more XP from killing Hobgoblins, since they have more life points than a normal goblin, but they're harder to kill.

To get a slayer task, you will have to speak to a slayer master. There are 6 Slayer Masters, which gives tasks of different difficulties:

Turael is the easiest slayer master, and he can be found in his small house southeast from Burthorpe. [map]
There are no requirements to go to this slayer master, and it's recommended to start with slayer master if your combat level isn't too high. Also, if you've got a task which is too hard from an other slayer master, you can ask Turael to give you an easier one. However, you can't change the task if Turael gave you the task.

Mazchna can be found northeast of Canifis, close to the Clothing Shop. [map]
Like Turael, there is no requirement to get a task from him.

Vannaka can be found just east of the entrance of the Wilderness part of the Edgeville Dungeon. [map]
He's the best slayer master that has no requirement. (Also, he's the guy who taught you how to fight on the tutorial island!)

Chaeldar can be found in the Lost City of Zanaris, in the room south of the entrance.
To get a task from him, you will need at least level 70 combat. To enter Zanaris, you will have to do the Lost City quest.

Sumona is the newest Slayer Master to join the ranks, and can be found North of the General Store in Pollivneach. [map]
Sumona's tasks are easily cannoned and offer fast expierence. You will need at least level 85 Combat and at least level 35 Slayer. Also, you must complete the Smoking Kills quest to recieve a task from Sumona.

Duradel, can be found above the Fishing Store in Shilo Village. [map]
To get a task from him, you will need at least level 100 combat, and at least Level 50 Slayer. Also, you have to complete the Shilo Village quest to enter Shilo Village. After the completion of While Guthix Sleeps you will have a new master there, Lapalok. Do the quest and you'll find out why.

Kuradal, the hardest of all Slayer masters, can be found in the Ancient Cavern, which can be found near the whirlpool near Otto Godblessed's house. [map]
To get a task from her, you will need at least level 110 combat as well as at least Level 75 Slayer.

Occasionally when being given your Slayer task you may be offered to upgrade to a more "interesting" challenge, these vary from killing every monster in the Slayer Tower to completing the Fight Caves from start to finish! Each master has their own specific challenge they will offer to slayers.

Turael/Spira
You will be asked to slay all monsters in Turael's basement.
These include: None of these monsters require any specialized equipment to defeat.

Machnza
Machnza will ask you to investigate the Fairy Rings and stamp out their corruption. You will have to visit three different fairy rings and contact Machnza using your slayer gem while there, upon doing so a monster will spawn that you must defeat to continue.
This task will award 2,000 Slayer experience and 3 Slayer points in addition to any Slayer experience earned during the task.

Vannaka
Vannaka will ask you to bring him four perfect dragon scales, one from each of the chromatic dragons. These can be dropped from either adult or baby dragons but are not a 100% drop so be prepared to fight multiple dragons per scale.
This task will award 4,000 Slayer experience and 10 Slayer points in addition to any Slayer experience earned during the task.

Chaeldar
Chaeldar will ask you to try out her new experimental fungicide spray on ten Mutated zygomites before returning to her with the results. Simply use the spray in place of the standard Fungicide spray when finishing off a weakened Zygomite. Upon doing so the zygomite will either die as normal, become enraged and attack at a faster rate or heal the monster entirely causing you to have to kill it once more.

Sumona
Sumona will ask you to venture into the Kalphite Hive and slay the infamous Kalphite Queen. You can do this with a friend, although you must ensure that you perform the majority of damage for the kill to count towards the task.

Duradal/Laplok
Duradel (or Laplok) will request that you venture into the Slayer Tower and kill every monster that inhabits it. This consists of: These kills must be done without leaving or teleporting away from the tower.

Kuradal
Kuradel will offer to replace a standard TzHaar task with a special Fight Cave task. This will require you kill 280 TzHaar creatures, most of the monsters within the caves, and TzTok-Jad himself.

Some of the slayer creatures can't be killed without certain items. The items are very different, some of them must be wielded, some are used on a weakened (almost dead) creature.
Some of these items can be bought from slayer masters.

After you've finished Smoking Kills you can gain points for different Slayer assignments given to you. The slayer Masters will have a "Reward" option when you right click them, you will have to gain points by completing tasks given by Slayer Masters. Each Slayer Master gives a different amount of points, the harder masters give more and the easier masters give less. Below is a chart that shows the amount of points given per task, notice you get more points for more tasks in a row. Also, if you get a task from the Burthorpe, your task count will be reset to 0.
Below are the 3 tabs that you will see. 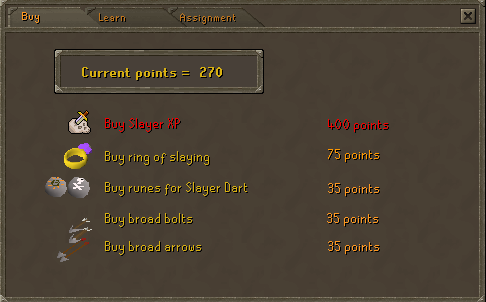 On this tab, you can buy multiple items with the points you have received from completing slayer tasks. 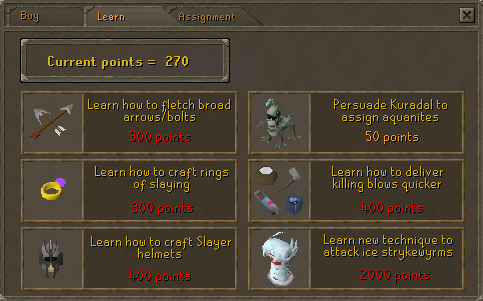 On this tab, you can learn multiple skills. 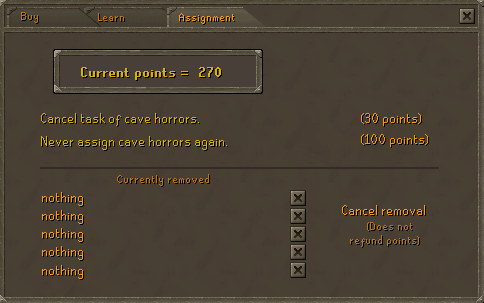 This tab is very useful when it comes to dealing with tasks that you are wanting to skip or block.

Do I get normal combat experience when training Slayer?
Yes, you will get experience like normally, in all fighting styles.

Are there any assignments that requires a completion of a quest before I can carry on that assignment?
No. You will only be assigned to kill the monsters you have access to.

How much experience do I get when killing monsters?
You will almost always get 1/10 of the monster's life points. For instance, the Goblins have 50 life points. So you will get 5 XP by fighting them. However, if you fight Hobgoblins in level 28, you will get 29 XP, since it has 290 life points.

Do I get XP from killing the Slayer creatures?
Only if you are assigned to kill them by a Slayer Master. If the Slayer monster isn't your current task, you won't get any Slayer XP. Guide credits
Written by: Aliensvortex
Guide and images by: Aliensvortex, Lil McGinley
Special thanks to: Mike, Psi Command, Chokelius, Tim, Moon Switch, Tristipen, Slim50, Predator, Kaleb, commandd, Nightmare
Last update: 14-Aug-2012 09:23 by Mike