Deep in some of the coldest and deepest areas of RuneScape lie strange monsters. These monsters are known to drop various furs, hides or tools that are valued by many players. There are many ways to trap these pesky creatures, varying from magical imp boxes to using a rented falcon to catch agile little kebbits.

To start hunting you will need a Noose wand or Bird snare, which can be bought from either Yanille or Nardah Hunter stores.

Now.. of course, kebbits and sabre-toothed kyatts aren't just going to roam around Varrock now are they? So you can find where to track down your pesky creatures here's a list of the eight different hunting grounds. Areas you can hunt at are marked on the mini-map with a

The Woodlands hunting area is located just south of the Piscatoris fishing colony which is northwest of the Gnome Stronghold. There is a near-by fairy ring to this hunting ground. (Code: A K Q)

The Jungle hunting area is south of Feldip Hills (South of Yannile). The best way to get there is using the gnome glider transport method (One Small Favour required) or the fairy ring nearby. (Code: A K S)

The snow hunting area, Trollweiss, is located north-east of Relleka (North of Camelot). The best way to get there is by using fairy rings. (Code: D K S).

The Desert hunting area is west of The Ruins of Uzer (South of Shanty Pass). The best way to get there is to use the Magic Carpet to the Ruins of Uzer or the fairy rings. (Code: D L Q)

The Swamp hunting area is located south of Canifis, between the Agility Arena and Dessous' Graveyard (Desert Treasure quest). To enter Mort Myre swamp you must have completed both the Priest in Peril and Nature Spirit quests. An additional easier route is to use the shortcut unlocked through the In Search of the Myreque quest. The other way to get there is to use fairy rings. (Code: D L S)

The Karamja hunting area is located south of Tai Bwo Wannai Village and north-east of Cairn Isle. The easiest way to get there is use the nearby fairy ring. (Code: C K R) 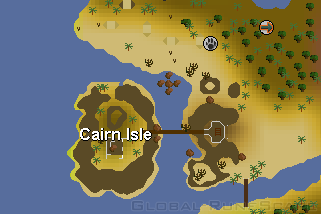 The Temple hunting area is located south-west of Ardounge, and west of the Khazard battlefield. The best way to get there is either using the nearby Spirit Tree or teleport to Ardounge and walk from there.

The Wilderness hunting area is the most dangerous of them all, it is in around level 20 Wilderness and is a multi-combat area. To get there, run north from Varrock and head north-east of the Chaos Temple. 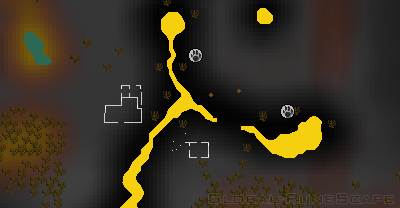 To start tracking animals you first need a Noose wand, they can be bought for 4gp from either the Nardah or Yanille hunting stores (see Basics - Starting). Equip your noose wand then head to the area that corrosponds with the animal you wish to hunt. You must first search a "Burrow" or "Hole" to start the tracks, then follow these tracks and search any nearby objects such as logs, plants or caves, after a few times of following the tracks you will evantually come to the end of your trail, then search any nearby objects such as snow drifts, bushes etc. If the animal is hiding underneath the object you will recieve a message telling you that that it seems there is a animal underneath, now use the attack option and you will catch your animal. Attacking the wrong bush may result in recieving junk items such as an Old boot. The furs you recieve can be traded at the Varrock Fancy Dress Shop for various camoflauge outfits.

To start bird hunting you will need to purchase a bird snare from a Hunting store (see Basics - Starting) for 6gp, then head to the corresponding hunting location to the bird you wish to catch, place your trap below the birds and wait until a bird lands onto your trap. You can then take it off and reset your trap. If you have 39 or higher Hunter level, you can smoke your trap to avoid the birds smelling you and therefore increase your chances of catching them.

To catch butterflies you must equip a butterfly net and have empty jars in your inventory, then you simply chase the butterfly until you catch it. Once in a jar, each butterfly can raise nearby players' stats by around 20% (Accept aid must be on).

To setup a deadfall trap, you must have a log and a knife. It is also advised that you take a hatchet with you which will allow you to refill your log supply. Once you have setup your trap, simply wait until your catch comes and then grab it and reset your trap. To increase your chances of catching your prey, it is advised that you use the appropirate bait, or if your Hunter level is 39 or higher, you can smoke your trap with a torch to avoid the animal smelling you therefore increasing your chance to catch it.

The rewards from Deadfall trapping can be very useful to certain skills; the claws can be attatched to dragon or leather hide vambraces (level 32 Crafting required) which gives a +2 strength bonus. Barb-tailed kebbits drop Barbtailed harpoons, which are useful for harpoon Fishing as you can equip them giving you one extra inventory space. The kebbit teeth dropped by the Sabre-toothed kebbits can be ground and mixed with avantoe to create a Hunter potion (level 53 Herblore required) which will temporarily boost your Hunter level by 3 levels. Lastly, the kebbit spikes can be used with a chisel to create kebbit bolts which can be used with the Hunter crossbow (level 32 Fletching required).

To begin hunting lizards/salamanders, you need a small net and a rope for each trap that you're going to set up. If you have the herblore level for them, you can make herb tars to use as baits on the traps to attract your prey to the trap, though a bait is hardly ever used for training purposes. A herb tar is made in 15s by using the corresponding herb with a pestle and a mortar, then using it on 15 tars.

Once you've reached level 39 hunter, you can also use a lit torch with your trap to "remove your scent" to get a better chance of catching a prey.

When caught, salamanders can be used as a weapon that is capable of using all 3 forms of combat.

Pitfall traps can be made by using a log on a trap hotspot while having a knife in your inventory. To get the beasts to fall into your traps, you need to poke them with a teasing stick, which will make them follow/attack you. Once you have one following, you jump across the trap that you made, and your prey will either walk right into the trap, giving you valuable furs or jump cross like you did, which will result you in having to repeat the process. You cannot use a single trap twice in a row.

The furs can be made into clothing. Refer to the Clothing section for more info.

To start on Falconry, you need to pay 500 gp to Matthias who owns the falconry area near the Piscatoris Fishing Colony in the Woodland to borrow a falcon, with which you cannot leave the area with. You are unable to wear anything in your weapon, shield and gloves slot while you are holding a falcon. When you click on the kebbits in the area, your falcon will fly to it for the kill and it will drop bones and a fur depending on what kind of kebbit it was.

The furs can be made into clothing. Refer to the Clothing section for more info.

Imp catching is pretty much the same as box traps, in which you just lay the trap on the ground and wait until a prey steps on it by accident. The beads used as bait for imps can be obtained by killing them.

In exchange for releasing them, imps will carry 2 items from your inventory to your bank from anywhere in RuneScape with the exception of level 30+ wilderness.

Rabbit catching is quite a simple job compared to the others. You need to set up a rabbit snare in the direction that the burrows face, then use a ferret to "flush out" the rabbits inside the burrows. A rabbit will get caught in your snare while running away if you're lucky.

If you string a rabbit foot with a ball of wool, you'll get a Strung rabbit foot, which makes nest drops more common while woodcutting.

If you have finished Eagles' Peak, you have the ability to ride eagles to the main hunting areas using a rope on them. You get no XP at all, but this is currently the fastest way to get to the hunting areas.

Before you can fully use this method of transportation, some locations need to be unlocked:

To catch the above creatures, you will need some cunning equipment, here's a list of them and where to get them. All except one of the equipment listed below can be bought from the hunting stores in Yanille and Nardah.

Depending on your level, you can set up multiple traps at once. Here is the list of the levels needed for certain numbers of traps:

If you hunt using either Tracking, Pitfall or Falconry, you'll realise that you get furs for every animal that you catch. These furs can be made into useful hunting equipment by paying the Fancy dress shop owner in South-East Varrock to make them for you or sold to fur traders for gold, with the exception of the Falconery furs, which the NPCs won't buy. 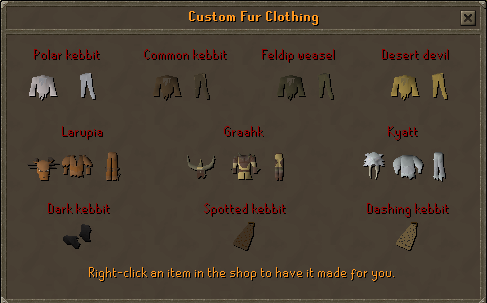 With certain Hunter and Agility levels, players can catch butterflies and Implings without a Butterfly net or butterfly jar. When catching an impling, if caught, When catching a butterfly, the butterfly is instantly released, granting xp.

The clothes below are made from kebbit furs obtained by Tracking. They give a minor advantage to hunting in their corresponding area.

Hunting a beast using Deadfall traps will get you hides that can be used to make clothes better than normal camo sets. Each time you suceed in hunting a beast, you will either get a tatty or a normal fur. Normal furs can be made into hat, top or legs, but tatty ones can only be made into top or legs.

Different from the furs obtained from Tracking and Deadfalls, clothing made from Falconry furs is used for non-hunting purposes.