Speak to Dororan the dwarf outside Barbarian Village [map].

1. To start the quest, speak to Dororan, the dwarf just outside Barbarian Village [map]. He will start to recite a poem, and you will have to complete it. It does not matter what you say to him, you will start the quest regardless of the options you choose.

2. You need to speak to Jeffery, who is in Edgeville. Head north to get to Edgeville, and go to the house with a furnace east of the bank, where you will find Jeffery. Ask him about the gold ring. Again, pretty much anything you say will give you the ring.

4. Once you have the engraved ring, speak with Dororan again. He will now ask you to take the ring to Gudrun for him.

5. Gudrun is walking around in the middle of the village. Give her the ring. She will tell you to speak with her father, Chieftain Gunthor.

6. The chieftain is located in the longhouse north in the village. Unfortunately, he is not very accommodating, so head back to Gudrun.

7. Gudrun tells you to speak with her "secret lover". Head back to Dororan and inform him about the situation. He will need your help to write a poem. He will ask you for words and sentences that fit the poem. The correct words are:

Once you've found the correct words, you will receive the poem.

8. Bring the poem to Gudrun. She will recite it to the chieftain. A cutscene will appear, and the chieftain will announce that they are no longer at war and Dororan is welcomed as the village's poet. Congratulations, you've completed the quest! 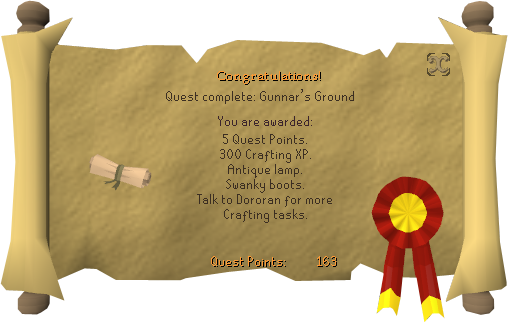 Our people dwelt on mountains steeped in lore,
A might tribe as harsh as any beast
Who then, in face of madness, swept to war,
The warlod Gunnar leading to the east.

This legacy of honour still lives on
In Gunnar's bloodlines, fierce to this day.
We sing the tales of battles long since won
And from his righteous purpose never stray.

But long is gone the author of that threat
And even rolling boulders come to rest,
For Gunnar's ground is rich and fruitful yet
And Gunnar's blood with beauty also blessed.

Now let these freemen from this conflict cease
And let this be the time of Gunthor's peace.

The quest replaced an earlier quest called Romeo and Juliet, which was removed because Jagex felt the quality of that quest was too low to stay in the game. In the quest, Juliet lived in a large house outside Varrock. Now, Dororan and Gudrun live in the very same house, and there is a reference to the fact that Juliet had lived there in Gunnar's Ground (Dororan mentions that there's a large amount of shoes there!)