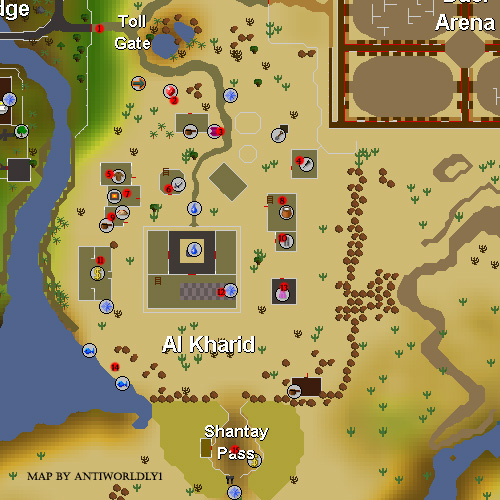 This is Al Kharid. It is the most easternly of all f2p cities. It is to the east of Lumbridge and south east of Varrock. There are many things to do in Al Kharid, including crafting, smithing, low level combat training, and a decent marketplace. Unfortunately for f2p players, there is no teleport to Al Kharid. The easiest way to get there is to teleport to Lumbridge for 1 earth, 3 air, and 1 law, and then walk through the gate to Al Kharid.

This is the gate to Lumbridge. This is the quickest way to get in and out of Al Kharid if you are traveling anywhere else than Varrock. To get to Varrock, you should move north past the chasim mine and through the gap in the fence there. To pass through the gate, the guards will charge you 10 coins, unless you have proven yourself to be a friend of Al Kharid, which you can do by completing the Prince Ali Rescue quest. I recommend completing this quest early because the ability to pass through the gate for free is a boon if you are planning on coming to Al Kharid often. 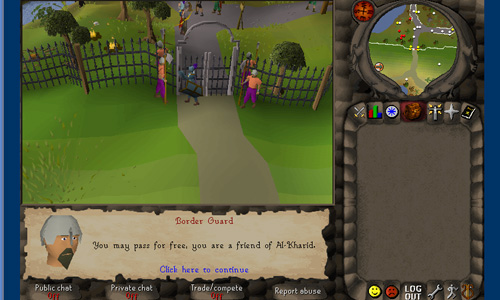 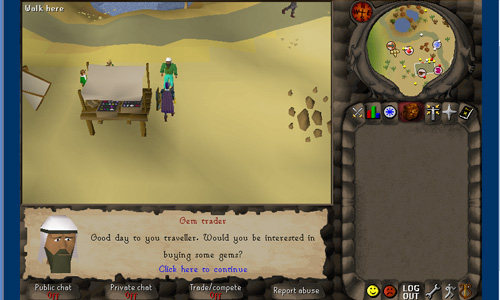 This is the gem shop. It is convieniently located if you are mining in the chasm mine to the north and happen to unearth a gem. You can just take a quick walk to the general store and buy a chisel, cut the gem, and sell it to the gem shop trader for a good deal better than you can get at the general store. 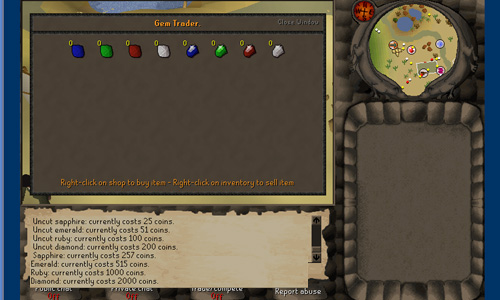 These are the prices that the gem shop offers. Notice the large discrepancy in the gem prices between cut and uncut. This means that you should never sell an uncut gem to the trader. If you can, cut it yourself, if you can't, there is always someone willing to trade cut gems for uncut gems at the local bank. Also, if someone happens to have sold an uncut gem to the store, go ahead and buy it. If you can cut it, do so and just sell it back to the store for a decent profit. 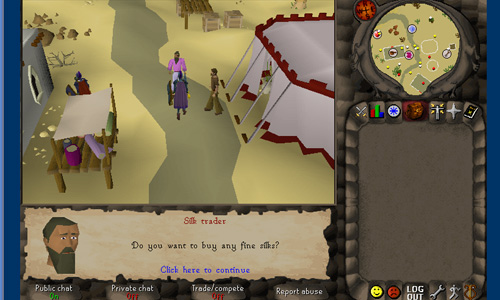 This is the silk trader. He sells silks for 2gp a piece. The only time these are used is during a quest. Also, if you are a member, you can use silk to clean the poison off weapons by using Karamja rum on it and using it on the poisoned weapon. Other than that, silk is not used too much. 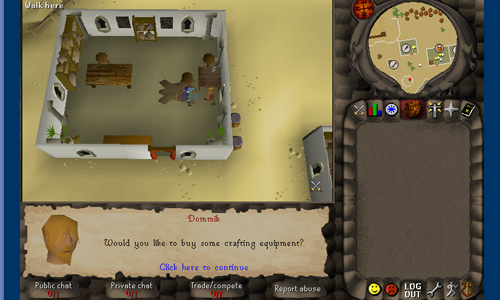 This is the crafting shop. It is the place where you can buy stuff for all your crafting needs, and the prices are below. The thread restocks at an amazing rate, so they hardly ever run out. Also note that thread is stackable, so go ahead and buy fifty even if you only have a few leathers, as they won't take up much space. 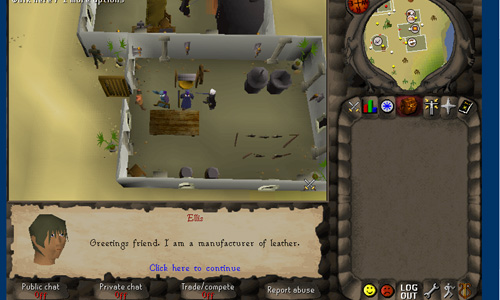 This is the tanner. He can tan your leather for you (the prices which he does it at per leather are below). He is convieniently close to the bank, much closer than the other tanner in f2p RuneScape who is in the crafting guild. If you are tanning large ammounts of leather at a time, take a needle and a lot of thread and make the item right after you have tanned it. Then go deposit it into the bank and take out another load of hides. After you are finished tanning, just note all your finished items and go sell them to the general store (as not many people will buy leather from players, they will usually just get it from a store). This saves a ton of time since you aren't running back and fourth to the general store after every load. 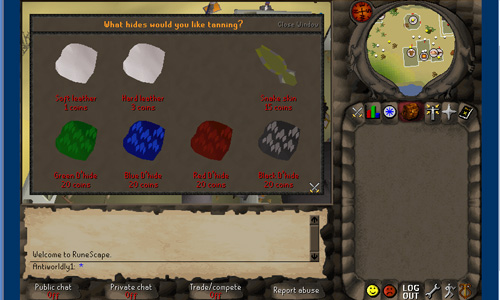 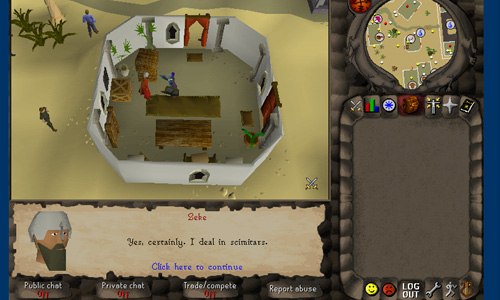 This is the scimitar shop. Unfortunately, he only sells up to mithril scimitars, not adamant or rune (pricing is below). His prices are a bit high, and if you want to try and get a better deal in the marketplace, you certainly can. However, if you don't want to have to haggle, you can stop by and pick up a scimitar here. 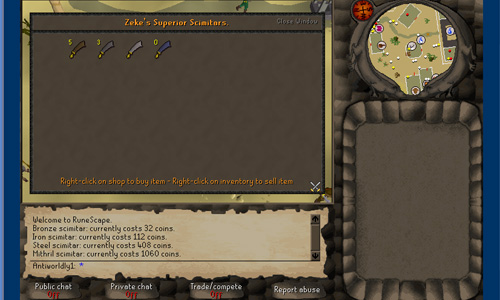 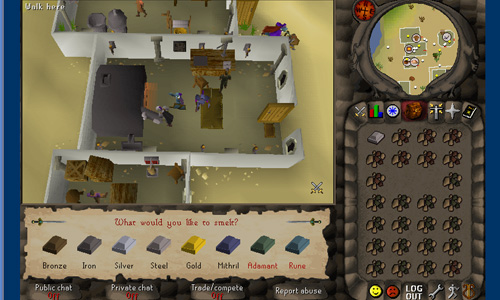 This is the best reason to come to Al Kharid. This is by far the closest furnace to a bank in all the f2p world, a mere 1 click away. If you have been using Falador, or even worse Lumbridge, you will be amazed at how much faster ore processing goes when you dont have much of a distance to walk to the furnace. 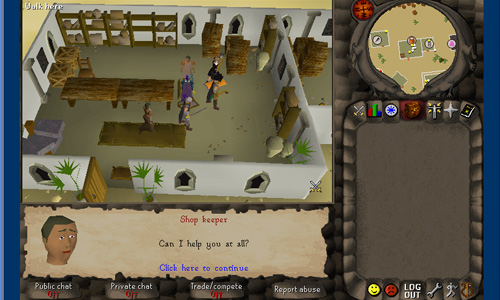 Yup, just a general store. The only thing unique about this store is that players tend to sell large ammounts of leather armor here because they just finished tanning and crafting it. So if you are looking for cheap leather, come here. Other than that, it's no different than any general store. 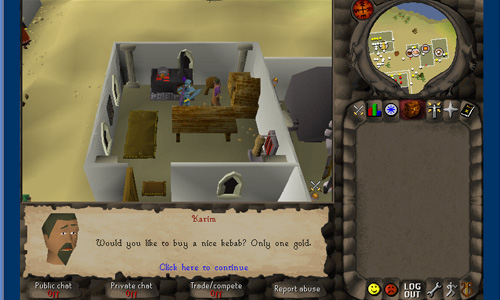 This is the Kebab Shop. Kebabs are interesting foods, as they heal a random amount. A problem with relying on kebabs for food is that he will only sell you one kebab at a time, so it will take a while to get a good base to train on. It is useful if you don't want to fish and are training on the Al Kharid warriors. 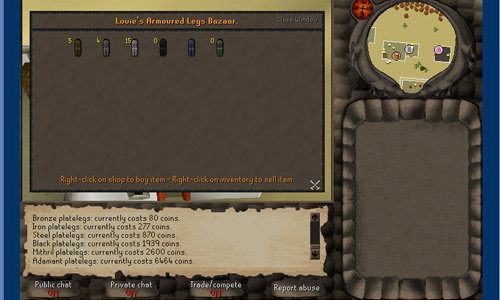 This is the leg shop. Legs are more popular than skirts and as such, the adamant legs are usually not in stock. Unfortunately, it does not buy or sell rune legs, for this you will have to go to the champion's guild. The prices are listed below, but player smiths are usually selling legs for less. Thus, unless you really don't want to go and find a high level smith, you can buy them here. 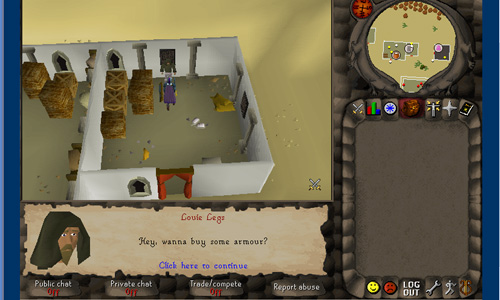 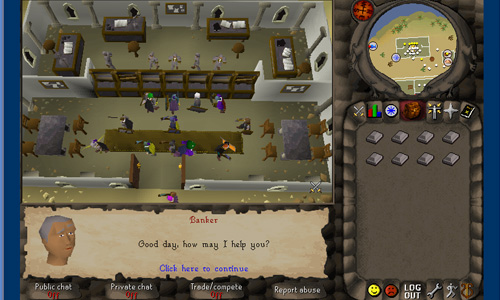 This is the bank. It is (in my oppinion) one of the three best banks in f2p RuneScape (the other two being the Varrock West bank and the East Falador bank). You will always find plenty of smiths moving back and forth from the nearby furnace smelting bars, so if there is a place to buy bars, this is it. Also, you will usually find people selling cowhides that they harvested from the nearby cowfield. These are really expensive if you are not willing to invest the time to find a good deal. 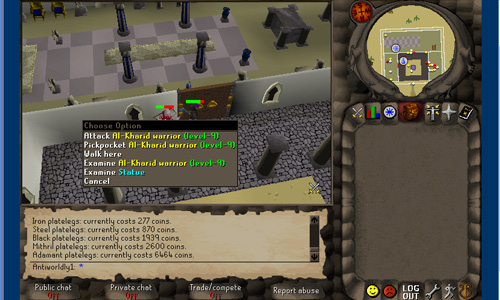 This is the palace. Inside is King Hassan, who begins the Prince Ali Rescue quest, and a host of level 9 warriors. Beware, this is a multi-combat zone, so it is not unusual to have two or three of these guys mob you if you prevoke them. This is an ok spot to train for low level players because of the abundance of enemies and the relative proximity to the bank. For all you who need water, there is a fountain in the center of the palace. On a side note, it has some nice decorations for the courtyard. 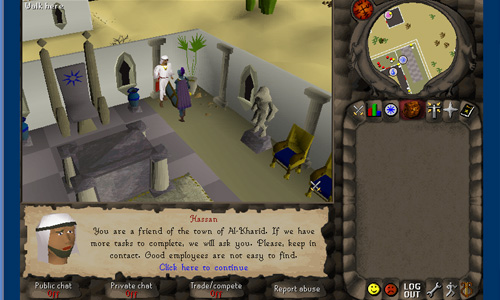 This is King Hassan. He is the King of Al Kharid, and the father of Prince Ali. Talk to him to begin the Prince Ali Rescue quest. Other than that, he serves no purpose. 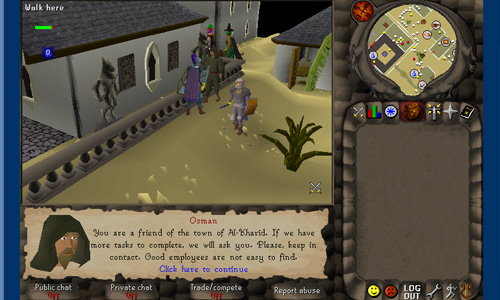 This is Osman. He is part of the Prince Ali Rescue quest, and is the head spy for Hassan. Other than that, there isnt much to do for him. 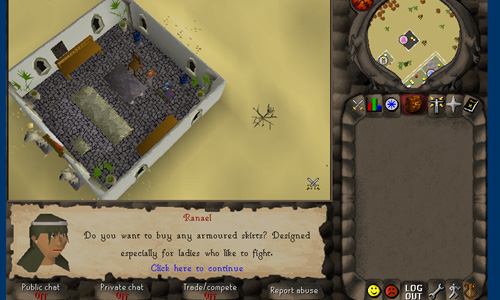 This is the skirt shop. Skirts are much less popular than legs, and so this shop usually has its addy skirt in stock, something that is rare for the legs shop. However, it does not buy or sell rune skirts, for this you will have to go to the Champions' Guild. The prices are listed below, but player smiths are usually selling skirts for less. Thus, unless you really don't want to go and find a high level smith and really want a skirt, you can buy them here. 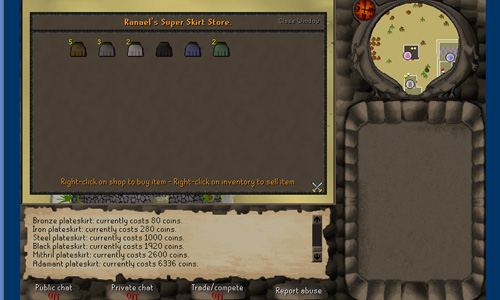 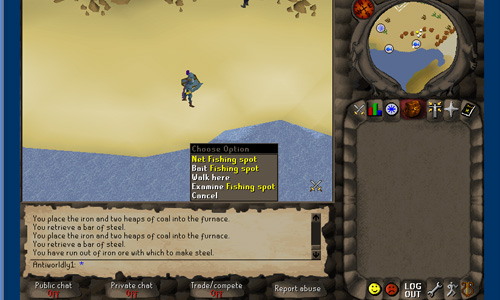 These are low level fishing spots, from which you can fish shrimps, anchovies, sardines, and herring. I personally adore this fishing spot for low level fishing because there is nobody here, and it is very close to the bank, so you can just bank the fish you catch and cook them all in one batch. If you do this, bank all the fish, even the burnt ones, then take the burnt ones out as notes, and then just drop them all at once. You wouldn't think it, but this saves a ton of time. 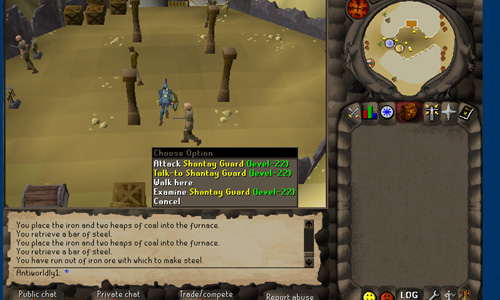 This is the Shantay Pass. It has no use in f2p worlds, save for a convienient meeting place, since it is often unoccupied. There are level 22 guards there, but these are not great to train on in comparason to other enemies because they do not have any good drops, and they tend to hit harder than other level 22 enemies. However, because of the afformentioned lack of players who come here, it can be used if you are bothered by other players while training.Guide credits
Written by: Antiworldly1
Last update: 02-Jan-2009 09:23 by Tim