The Guild for only the quest champions of RuneScape lay in the suburbs of Varrock city just south-west of the main city [map]. To enter this most prestigious guild in the Free worlds, you would need at least 33 Quest Points (roughly completed nearly all free players quests). The Guild Master will greet you as soon as you enter the Guild. He is also the NPC you would want to talk to start the Dragon Slayer quest.

On the first floor there is nothing much apart from a small chicken coup outside. The chickens drop bones, feathers, and raw chicken, which can all be used.The bones can be buried for Prayer experience, the Raw chicken cooked at the range for Cooking experience which is also right there on the first floor, and the Feathers for Fishing, Fletching if you are a member, or they can be sold. This is a good place for low level cooks to get some levels up because there is a range in the next room. 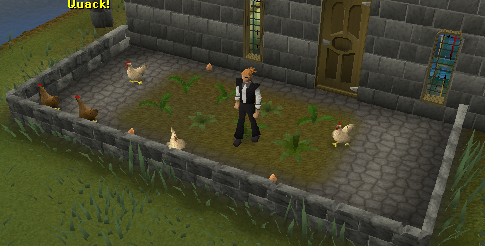 This is also the quest start point for one of the hardest non members quests, Dragon Slayer. To start the Dragon Slayer quest, talk to the Guild Master. 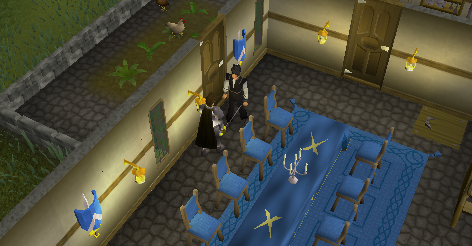 On the first floor, you will find two traders by the name of Scavvo and and Valaine. Scavvo owns a little "toy store" and guess what the toys are; Rune armour of course! Valaine runes the Shop of Champions and you will be able to purchase some items from her as well as sell her items at general store prices.

You must be a member to enter the basement.

This is where you come to fight when you get a duel challenge from any particular race champion. Speak with Larxus and show him your challenge scroll to get started.

While fighting your way across RuneScape you may find a message from one of the champions challenging you to a duel. These duels take place with very strict rules which you will have to obey, so think carefully before accepting the fight! 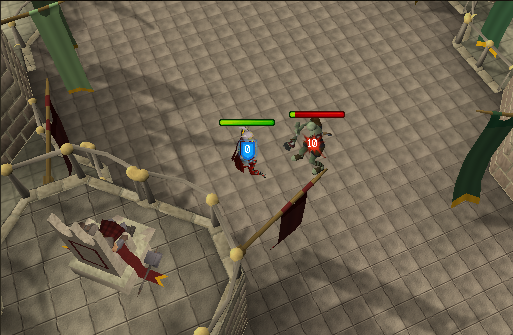