Throughout the years, many guilds dedicated to different trades have been created. Among these guilds were the Rangers' Guild and Wizards' Guild, covering two out of the three styles of combat. A man named Harrallak Menarous decided to add the last piece to the triangle and created the Warriors' Guild, a guild dedicated to the art of melee combat. Here there are many rooms that warriors from all parts may come and hone their skills.

The Warriors' Guild is located in the western part of Burthorpe. The easiest ways to get there are to either use a Games Necklace to teleport to the Burthorpe Games Room and walk a short distance or use a Bracelet of Combat to teleport straight to the guild's entrance.

To enter the guild, your attack and strength levels must meet a total of 130 or above. 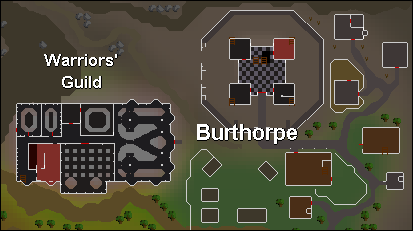 As you play the mini games inside the guild, you will acquire special tokens. Speak to a member of the guild staff and they will reward your work in the mini games with an amount of tokens.

On the first floor of the Warriors' Guild, you will find services such as a bank, a food store, and a potion shop, along with a couple of mini games to play.

The food store contains trout, salmon, plain pizza, potatoes with cheese, and stew. The potatoes make a great, cheap food to use.

Ajjat, the master of attack and a former black knight, is in charge of overseeing the Combat Dummy Room. In this room, there are eight combat dummies of seven types, two being of the same type. A random one will pop up out of its hole for a few moments. After which, it will go back down and another one will come up. When one comes up, choose the correct attack style and hit it. The style can be determined by the appearance of the dummy. There is a scroll on the wall with information about each dummy.


For each successful hit, you will be granted 15 experience in the attack skill and 2 guild tokens. Note that there are two "controlled" dummies that pop up at the same time.

In this room, you can take sets of armor and turn them into a set of animated armor to fight. Use a set of armor (full helmet, plate body, and plate legs) on one of the armor animators in the room to do so. When you defeat a set of armor, it will drop an amount of tokens based on what type of armor you used and a full helm, plate body, and plate legs of the corresponding metal. Note that every now and then, a piece will break and it will be lost. It is harder to break tougher metals such as adamant and rune, so the higher the quality of the metal is, the harder it is to break it.

Fighting sets of black, mithril, or adamant armors is the fastest way of gaining guild tokens for most levels.

The second floor of the Warriors' Guild contains the bulk of the mini games and a shop, too.

A weapons and armor store is located on the second floor. It sells up to adamant of many types of items.

Gamfred, a dwarven engineer, has set up a large catapult in this room. In this mini game, you use a large shield to deflect objects hurled at you by the catapult using different styles, depending on the object. The catapult throws blunt, sharp, spikey, and magical objects at you.


Each block grants you 1 token and 10 experience in the defense skill.

This mini game is run by the master of strength, Sloan. To play, simply pick up either an 18 or 22 pound shot and throw it. Each throw drains 10 of your energy. If you are low on energy, then you are more likely to drop the shot, causing a point of damage. Dropping the shot still removes 10 energy from you. If you are out of energy, then you will be too tired to play the game and you will have to recharge it to be able to play again.

Taking ashes and grinding them in a pestle and mortar makes a fine, chalky dust, which, if put on your hands, allows you to throw the shot even further.

Each successful throw grants you experience in the strength skill and guild tokens. The amount of tokens gained can be determined by this:

Jimmy, a slightly "tipsy" worker at the guild has a challenge for anyone willing to give it a try. Try to stack all five barrels lying around the room on your head. Sometimes the barrels will fall off of your head, causing minor damage and draining a small amount of your energy. Jimmy will award anyone who tries some guild tokens.

The amount of tokens earned is equal to twice the amount of barrels on your head when they fall off. Note that you also gain some strength experience from this mini game, too.

This mini game is not the best way to acquire tokens, but it is a fun game to play and laugh at.

The third floor of the guild contains the biggest attraction - the Cyclopes Arena.

Cyclopes Arena The Cyclopes of the arena have a chance of dropping a defender, a valuable item for the warrior. This is where you use your guild tokens.

Each minute in the arena uses up ten guild tokens, so bring a large amount of them so you can stay longer.

Here are some suggestions of items to bring into the arena for fighting the Cyclopes and getting defenders.

Food
The food shop on the first floor sells cheap, good food. The potatoes with cheese, pizzas, and stews are the best choice.

Potions
Once again, the guild has you covered here. Buy a few sets of potions from the shop. Bring a set each time you do a run.

Fire Runes/Staff + Nature Runes
These are optional. Every now and then, the Cyclopes will drop an item worth keeping. (mithril and adamant in particular) If you want, you can keep extra space for picking these up and selling them to the guild's armory on the second floor or you can just use the High Level Alchemy spell on them there.

Cyclopes drop some neat items. These include uncut gems, grimy herbs, black throwing knives, and big bones. Gems are great to keep around, herbs are self explanatory and have a chance of being something fairly good (ranarr+), black throwing knives drop fairly often and are a neat drop, and big bones are fairly good if you need to train your prayer level. They also drop defenders, of course.

Once you find your first Bronze Defender, the Cyclopes will start to drop the iron ones. When you find the Iron Defender, they will start to drop steel ones, and so on up to runite ones. Note that the Cyclopes will not start dropping the next type of defender until you have re-entered the room, so walk out and back in when you find a defender. You may throw out the defenders as you find higher ones, as they are not needed any more. It is a wise idea to keep around multiple Rune Defenders in case you lose one. Since you need either an Adamant Defender or a Rune Defender to obtain a rune one, you can gather more when it is needed.

Defenders
Defenders are a great item to have around. They are worn in the shield slot and give attack, defense, and strength bonuses. The only downside to a defender is that it gives less defense than a shield and gives negative defense to ranged attacks. Other than that, however, they are great.

At the Warriors' Guild, you can obtain the Capes of Achievement for attack and strength. Talk to Ajjat on the first floor for the Attack Cape, and talk to Sloan on the second floor for the Strength Cape.

When the guild first came out, there used to be a glitch where you could walk around "drunk," the movement that you do when you balance kegs on your head in Jimmy's mini game. All you had to do was walk out of the room with a keg on your head and it would dissapear, but not the movement. You could walk outside of the guild like that. Certain things such as teleporting and logging out stopped it, however. It was a great laugh when it worked.