The southwest Varrock mine is located, as the name suggest, southwest of Varrock. The closest Varrock entrance is the southern one, and the mine lies immediately northwest of the Heroes' Guild. There is a level 6 mugger nearby, who attacks players up to level 12 combat, but the mugger is mainly in the southern part of the mining area, giving lower level players the ability to use the northern part. The closest bank is the Varrock west bank, and it takes 25 seconds to run to the bank (45 seconds if you are walking) if you go through the Western entrance of Varrock.

The mine is much less popular than the southeast Varrock mine. It is closer to the bank than the Crafting Guild for mining silver, but there are only 3 silver rocks here. The shortest path to the bank is shown in the map below. 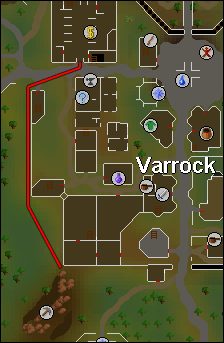