Deep in the wilderness, lies a great arena where mages from afar come for epic battles of magic. The owner of the arena, a shape-shifting mage named Kolodion, will pass on the knowledge of the three legendary and powerful god spells to any mage that proves them self in a duel against him.

The mage arena is a members only mini-game where the player takes part in a duel against a mage npc, Kolodion. Upon winning the duel, the mage allows you to use the god spells.

Note: Level 60+ magic is required for this mini-game. It is useful but not required to have level 37+ prayer for the Protect from Magic prayer.

The Mage Arena is located in the 55th level wilderness, so it is advised to bring minimal gear when traveling to the Mage Bank. One way to get there is to walk through the wilderness. However, the easiest (shortest) way is by using a teleport lever located in Ardougne.

At this point, you will only need a slashing weapon. If you are using prayer, remember to recharge it while you are in Ardougne!

Cut through the spider webs as you come to them. If you fail, try again until you cut it in two. Pull the lever inside the small building with the mini-game symbol on it.

The Mage Bank is a safe (and useful) area in the wilderness where a bank, a rune shop, and more can be found. Lundai owns a rune store and Gundai is in charge of making bank transactions.

The other npc in the Mage Bank, commonly referred to as MB, is the mage Kolodion, the owner of the Mage Arena. He is who you have to defeat.

Your gear all depends on your stats. Here is an example of what to bring: 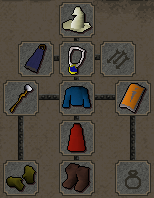 Staff: It is highly recommended to bring either an air staff or a fire staff to meet some of the requirements for the spell Fire Blast.
Robes: Obviously, it is useful to bring armor with magic attack and defense bonuses. If you are using the prayer Protect from Magic, you may want to include a little prayer bonus(es) in there. Suggestions would be mystic robes or zamorak robes. Mystic robes are more expensive and offer a higher magic attack/defense, whereas zamorak robes are cheaper and offer lower magic bonuses and give a prayer bonus.
Shield: If you have completed the quest Horror from the Deep, then bringing a prayer book would be the best pick. Otherwise, use an elemental shield or an anti-dragonbreath shield for their magic defense bonus.
Hat: Those that have completed the Fremennik Trails quest should take a farseer helm. If you have not done that quest or cannot afford one, then a mystic hat or a plain old wizard's hat would work. Note that a gnome hat offers slightly better stats than a wizard's hat so a gnome hat. Gnome hats can be purchased at the gnome Grand Tree clothing store.
Gloves/Boots: Mystic boots and gloves would be a good choice if you can afford them (or stomach the thought of taking them out into the wilderness). Another excellent (probably the best) choice for gloves would be a pair of gloves from the Recipe for Disaster chest. Any other magic-enhancing apparel would work for boots and gloves, those are just suggestions.
Amulet: An amulet of magic should be plenty good for this mini-game. It's cheap and has a +10 magic attack bonus on it. Other possibilities would be a bless (un)holy symbol or an amulet of glory.
Ring: If you have done (or gotten most of the way through with) the quest What Lies Below, wearing the Beacon Ring would be optimal for its bonuses to magic.
Runes: Bring enough for about 100 casts of the spell Fire Blast. If you have a fire staff equipped, then bring 400 air runes in your inventory along with 100 death runes. However, if you have an air staff equipped, then bring 500 fire runes and, of course, 100 death runes.
Food: Those that are not using protect from magic may want to fill their inventory with a high healing food such as sharks. Prayer users should bring a few pieces of food along with a prayer potion just in case of emergency.

Tip: Select to auto-cast Fire Blast before entering the duel.

Kolodion is a shape-shifter, and, of course, has multiple forms, each being stronger than the last.

The first form is easy. It has 3 hit points and is a breeze to take out. Nail him with 1 hit if you can. 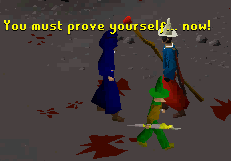 The second form is an ogre mage. He is a bit tougher than the last (mainly because this time Kolodion has a more "respectable" amount of hit points) form but is still pretty easy. 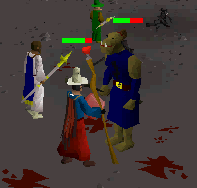 The third form is a giant spider. Again, harder than the last but still not too tough. 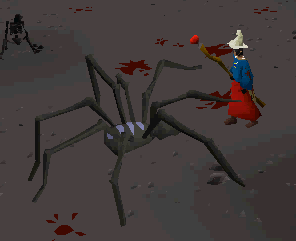 The mage's last form is a level 112 black demon. Try not to lose your nerve. Just keep up the pace and take him out. 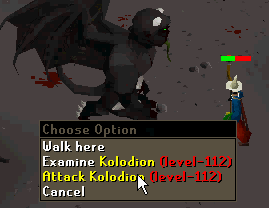 Note: MAKE SURE that you have at least 21 hit points before the end of the battle. Sometimes you can have one of the mages nail you with a god spell before you teleport out, which may doom you if you have under that much. 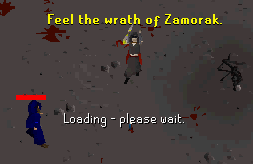 When you talk to Kolodion after the battle, he will congratulate you and tell you to step into the nearby pool of water. 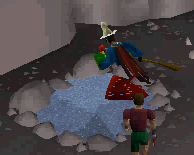 Walk down the hallway and you will find three statues depicting the Runescape gods. Pray at one to receive a special god cape. God capes give the same defensive bonuses and a normal cape does but they also give a +10 magic attack and defense bonus. Talk to the man you saw near to the pool to claim your god staff. Choose which statue you pray at carefully, because the staff you obtain (and the spell with it) corrisponds with the statue you prayed at, so make sure you have the one you want! If you want to change capes, then drop the one you have and pray at a different statue. Additional staves and staves of other gods can be purchased for 80,000 gold each from the man that gives the free first one.

Note: the "special effect" of each spell is only applied once on the first hit (not splash).

Using the Spells Outside of the Arena

The Mage Arena may be accessed by walking outside of the bank (and consequently through the wilderness) and out to the lever next to the arena's large, stone wall. (remember to bring a slashing weapon) 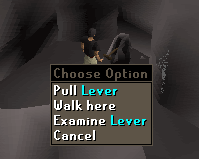 Tips for Training:
- While going to the Mage Arena be very careful due to the Revs.
- Take less uses of the spell per trip to avoid losing a lot if you die.
- Bring a prayer potion if you are using protection from magic. If not, bring plenty of food.

Note: Casting the spell 100 times means casting it. This includes both hits and splashes.

Players with level 80 magic may use the Charge spell. Charge increases the maximum damage for the god spells from 20 to 30 damage. To use Charge, you must have a god cape equipped. Guide credits
Written by: Syntax Error
Special thanks: Chokelius
Last update: 19-Feb-2009 20:27 by Pineapple