In the depths of Karamaja volcano lies one of the Runescapes most challenging areas. This entire area is controlled by a powerful and ancient race known as the TzHaar. You can choose to either fight in the dangerous Fight Pits against some of Runescape's strongest players, or take on the challenge of fighting Runescape's strongest monsters in the Fight Caves. If you are one of the few who is succesful in either of these challenges, you will be rewarded with Tokkul, which you can redeem for an impressive range of new and unique equipment, such as new weapons, a new shield , new jewlery and a new gem which can be crafted into a oynx amulet or ring! Also capes, ores and runes can be bought with Tokkul in the local stores.

From killing these monsters TokKul can be awarded. Tokkul is non-tradable and can only be spent in shops in the Tzhaar Region. Also, different TzHaar weapons and armour can be dropped such as Obsidian Capes or A TzHaar-Ket-Om (Obsidian Maul). Read further for full item guide.

The Fight Pits are the area of TzHaar where players of all combat can fight against each other. Being the last one alive in the pits can be rewarading; TokKul rewards are given to the last person standing. The Fight Pits can be found to the western side of The TzHaar Region. There is nothing you can't take into the Fight Pits, for example maybe a super set or two, some armour, a bow, or runes. The possibilities are endless. Before you can go into the pits to fight you must wait for the round to finish. 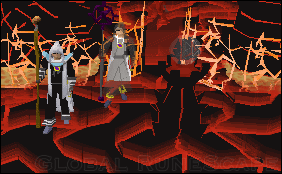 In the waiting room there is a viewing orb, which can be used to view the current round. 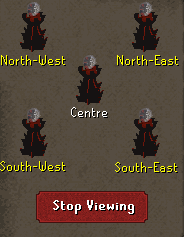 There is no set way to fight in the fight pits. A few strategies commonly used are ancient magicks, the best way and most sucessful way to win in the fight pits is in a team. Often in the waiting room you will hear 'Follow me to join my team'. It is good to join those teams.

The Fight Caves is the ultimate man against monster battle for Runescape's strongest players. It consists of battling countless monsters, ranging from level 22 all the way up to the level 702 TzTok-Jad. Ouch, that's gonna hurt! If you wish to complete this mini-game successfully, you will need to have a high combat level(110+). However, level 90+ players have been known to defeat Tztok-Jad. A useful trick is to use Guthan's armour as the special attack drains life points. But another trick could be to use the blood spells from Ancient Magicks (Desert Treasure must be completed) This is now the strongest monster in Runescape, and makes the Kalphite Queen look like a goblin. Tztok-Jad, like the Kalphite Queen, changes its protection prayers, so you will need to be quick if you plan to take this beast down. As mentioned before using Guthans or blood spells are very helpful, but also Karil's or a crystal bow and Black Dragon Hide is effective.

On killing this beast you will recieve a rare untradeable fire cape. This is a mark of a very strong player in RuneScape, and seperates the men from the mice.

In the TzHaar Region there are a number of shops where you can spend your well earned TokKul on different items such as new capes, shields, weapons, ores and even an Oynx Gem which can be used to craft Amulets of Fury or Rings of Stone!

Here you can buy your uncut gems and ores,but most of all the rare Oynx Gem.

In the TzHaar there is also a lava forge. This can be used to smelt ores just like any other furnace. It is located south of the bank.

In the Tzhaar Region there are also several Sulphur Vents around. These can be used to cook your raw food on just like a range or fire.