Please note that this is the reward for completing all the subquests as well.

Speak to Darren Lightfinger in the cellar of the house just north of the Lumbridge furnace. It can be accessed through the trapdoor just outside of the house, next to the north wall.

To complete all the subquests the following skills are required.

To complete all the subquests the following items are required.

Needed Items:Logs and a Tinderbox

1. Speak to Darren Lightfinger in the cellar of the house north of the furnace in Lumbridge. The cellar can be accessed by the trapdoor outside of the house by the north wall. You can choose to either hear his speech or skip it, either way he will ask you to pickpocket the dummy in the room to practice thieving. Pickpocket the dummy and speak with Darren again.

2. Darren will now tell you of your assignment – the golden chalice. Go to Lumbridge Castle to speak with Robin. He can be found in the southern end of the courtyard, at the souther wall of Lumbridge Castle. Robin will reveal that the chalice has been withdrawn from the bank vault by an old man living in the swamp.

3. Go to Father Urhney’s house in the southeast of the swamp. Attempt to pickpocket him but he is too alert. Light a fire under one of his windows then speak to Father Urhney about his chalice and then choose to say “Fire! Fire!” Pickpocket him while he is distracted and then open the case containing the chalice.

4. Go back to Darren Lightfinger and give him the chalice. 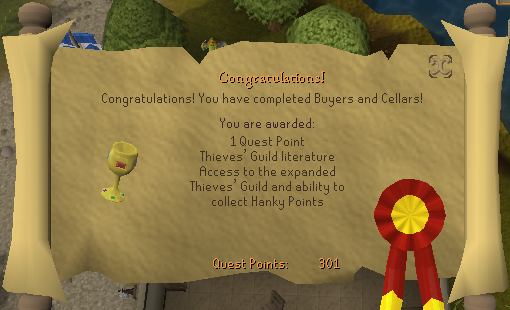 1. Darren now has another caper for you. This time you must steal a toy baby dragon made of rubies from a craftsman in Varrock. Head to Varrock Square.

2. Speak to the Market guard and ask him about Urist. He will tell you that Urist keeps a talisman in his back pocket. Pickpocket Urist to steal it and then put down the talisman and speak to Urist again. He will go over to pick it up. Meanwhile, quickly distract the guard and then steal the dragon from the stall.

3. Speak to Urist again and he will be forced to give Darren’s money back as he can’t meet the deadline. He will hand you a banker’s note. Return to Darren in Lumbridge. 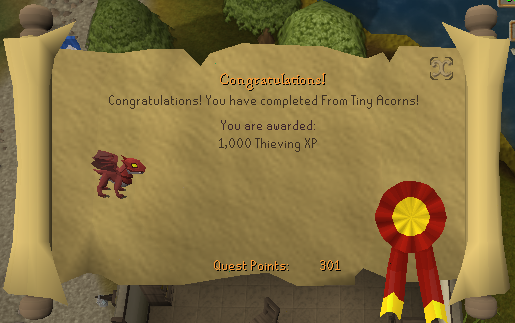 1. The next task Darren sets you is to find 32 flame fragments which were once pieces of solitaire. They have been scattered throughout Gielinor but have been picked up by various people. You must thieve these people to find the fragments. Each group of people has a maximum of 6 fragments.

These fragments can be gotten from anyone that can be pickpocketed from. The closest groups are:

2. Once you have all 32 fragments, return to Darren. The fragments can be handed back 8 at a time and each time Robin rewards you with various raw materials as well as 1200 Thieving XP. 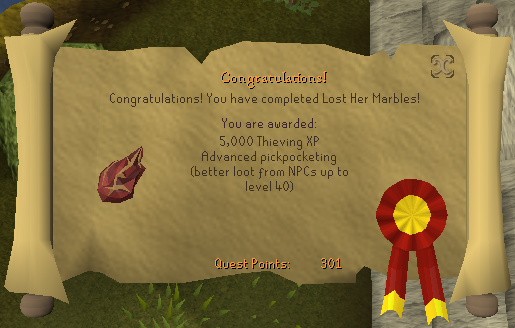 A Guild Of Our Own

Note: The blackjack and the lockpick can be bought from Dodgy Derek inside the Thieves' Guild.

1. Darren now has one final task for you to complete. To ensure that the Thieves’ Guild becomes official, an outrageous registration fee must be paid to the Guild Registrar in Ardougne. Your task is to break into the Registrar’s vault, steal their bonds and then pay the fee with their own money. To do this you will need a blackjack, a lockpick and a disguise.

2. Speak to Robin about the disguise. He will tell you how to make a Vial of stench, which will cause the guard’s eyes to water so much that he can’t see you clearly. You will need a vial of water, an irit leaf and a bowl of chopped onion. The bowl of chopped onion is made by using a bowl with an onion.

3. Once you have made the potion return to Robin and he will cast a spell to ensure that the potion doesn’t affect you as well. Now go to East Ardougne, the Guild Registrar is located to the southeast. 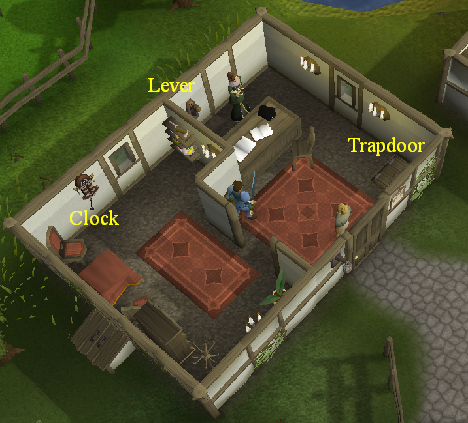 5. Pick the lock on the gate and check the chest before opening it. This will disable the trap allowing you to steal the guild bonds. Inspect the boxes to leave through the ventilation shaft. 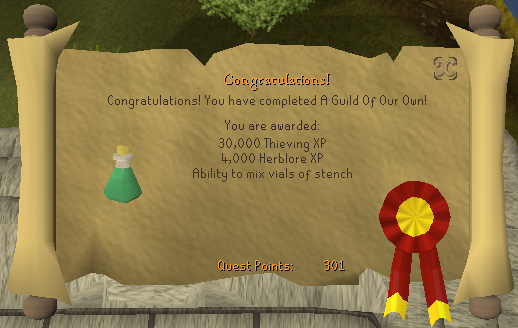