1. Speak to Captain Undak, located just east of the bank in Dorgesh-Kaan, and ask him if you can help him with anything. He explains to you that some of the children in the nursery have fallen sick and he fears that the H.A.M. organisation is behind it. Agree to follow him to the nursery and go up the stairs nearby.

3. Now you need to ask the four children who are sick about what they food they ate yesterday. They’ve eaten at least one food which made them sick. The poisoned foods are the frogspawn gumbo and then green gloop soup. Speak to Undak and tell him you’ve figured out which foods have been poisoned. He’ll tell you that human spices have been bought by the goblin food merchants lately so one of the vendors must be a H.A.M. member. Go downstairs and head south to the market.

4. Now talk to the food merchants who sold the bad food and find out which merchant sold ingredients to both of them. You discover it’s Walton. Tell Undak you’ve discovered which merchant has been selling the spices and then go south and speak to Walton and tell Undak that he’s the one (You have to pay 5,000 gp as compensation if you accuse the wrong merchant).

The Return of Zanik

5. Choose to attack the merchant and when you weaken him enough he will turn on a protection prayer. A portal appears behind him and Zanik jumps out of it and helps you weaken Walton enough for Undak to arrest him.

6. Ask Zanik about where she’s been and as she tells you you’re able to control her in a cutscene. Head southwest and jump up onto the goblin statue. 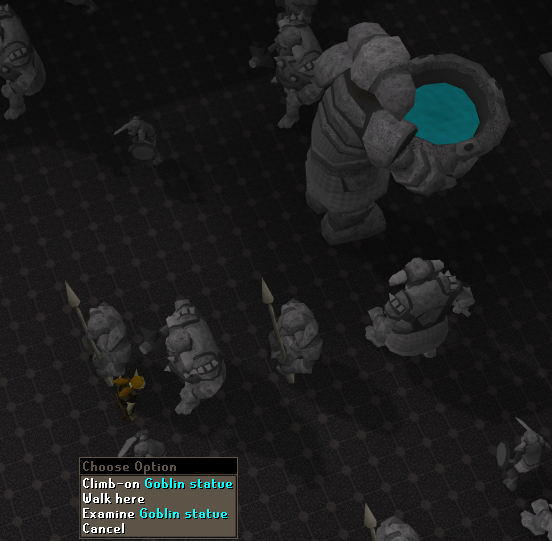 Now jump to the ork statue and keep jumping from statue to statue until you reach the Ourg statue holding the bowl of water. A cutscene follows. 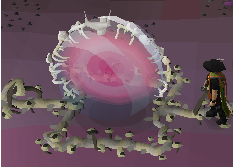 Zanik now says that she should go speak to the council so agree to go and head north and then upstairs.

8. Another cutscene begins where the council decide to hand Walton over to the humans. However as he’s being escorted out of the city Zanik kills him. Tell Undak you’ll help look for her and he tells you to search in the caves south of the city under the agility course.

9. Go to the southernmost part of the city on the second floor and take the stairs heading south. Go south to the cable and to the west there is a ladder, climb down it. Continue down the south path until you see Zanik. Talk to her but choose the option to sit next to her. Choose the option to say nothing twice then comfort her. Eventually she will return with you to the council. They choose to banish Zanik for her crime until they see it fit that she should return. Once outside again speak to her and she will teleport away. Speak to Undak and he will ask you to infiltrate the H.A.M. hideout near Lumbridge. Accept and he will give you a set of H.A.M. robes to use.

10. Go to the H.A.M. hideout and go into the southwest passage with the jails in them and speak to Johanhus Ulsbrecht. Ask him what he’s planning to do about the cave goblins and he’ll tell you that it’s Sigmund who’s planning the attacks. Ask him where Sigmund is and he tells you that he’s taken a group of followers with him and set up a new base in Kandarin. The base is located at the windmill north of Ardougne and the password is ‘Arrav’. Go to the windmill.

11. Once at the mill take your H.A.M. robes off and then speak to Milton the Miller and tell him you want to get into Sigmund’s base and that the password is Arrav. He’ll move the crates, allowing you to enter the base. Climb down the ladder and pickpocket H.A.M. agent Sam to get a letter. Then head east through the doors and give the letter to the H.A.M. guard outside the prison room. Go into the room, pick up the key and let the trapped goblin out.

12. Go to the southwest room (the kitchen) and squeeze through the hole in the east wall. Go through both doors from inside that room to unlock them then return to Grubfoot. Tell him you’ll distract the guard so he can make a break for it. Stand north of the guard outside the room and speak to him. Wait for Grubfoot to go to the next room, then follow him into the same room and tell him to wait by the West door. Now go back into the kitchen and take the dirty plates. The H.A.M. guard outside will come into the room asking if it was you who made the noise. Wait for Grubfoot to move to the next room before following him in there. Then tell him to follow you. Walk out of the eastern door but the guard will spot you. However Grubfoot paralyses him so he can’t attack you. Continue north past the crates and then head west through the door.

13. A cutscene takes place where a group of goblins lead by Zanik are attacking the H.A.M. members. Sigmund notices you and attacks you but with help from Zanik you defeat him. As Sigmund is about to teleport away Zanik cuts off his hand and then kills him. Zanik then attacks you so fight her. She keeps regenerating and gives an option to talk before each time she regenerates. Keep killing her and reply with a positive answer until you get the option ‘Zanik it’s the pendant. Take it off!’ and ‘You’ve got to do it otherwise it will win!’ She’ll take off the pendant but the high priest will pick it up and Bandos will then control him. He teleports away but the cave starts collapsing so Zanik uses a teleport sphere to teleport you both out.

14. The sphere teleports you to a cave somewhere near Dorgesh-Kaan. Head to the west and an earthquake will occur, trapping Zanik. Clear the rubble and then tell Zanik to try to grapple across with her crossbow. You’ll have to direct her though. Tell her right, right, left, left. Encourage her when she feels she can’t do it. 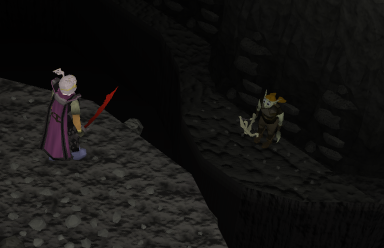 After she’s made it across walk west and you’ll appear in Juna’s cave. Follow the path north through to another cave with the giant frogs and continue north. Squeeze through the hole and talk to Kazgar. Convince him that Zanik should be allowed back into the city and he’ll take you through the caves. 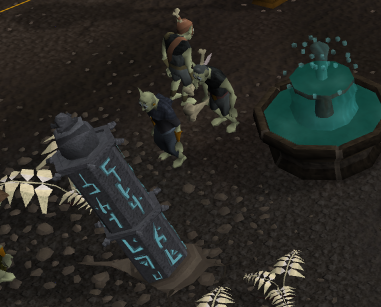 They have translated the message on the obelisk which says that the goblins have one last chance to surrender. Zanik convinces the council to fight instead. Go talk to the scribe in the council room to see if you can do anything to help.

16. He’s making a time capsule and asks you to go get a box of artefacts from Tegdak. Head into the hallway east of the quest start and then go to the northern room. Ask Tegdak for the artefacts and then return to the scribe with them. He seals the box and asks you to give the box to Mistag. Go north, out of the city and talk to Mistag in the mines. Ask him to bury the capsule. After he agrees to do it he advises you to talk to Oldak. He can be found in the northwest corner of the city.

17. Oldak is arguing with Grubfoot but eventually he’ll send you to fetch items from Turgall. He can be found by the agility course south of the city. Once by the agility course head east to the power station. Go down the stairs and speak to Turgall. Ask for energy projectors and the focusing chamber and then go back to Oldak who’s gone to where you fought Walton earlier on in the quest. Oldak uses the items to modify Zanik’s crossbow so it prevents Bandos’ regenerating magic. Give the crossbow to Zanik. She tells you to go talk to Mernik and check on the children.

18. Speak to Mernik back at the nursery. He asks you to speak to Ambassador Alvijar to try get him to let the children go to Keldagrim as they would be much safer there. Alvijar’s house is just north of the nursery. Speak to him and he’ll refuse to take any refugees. Return to Mernik with bad news. Melnik tells you to go back to Zanik at the portal. Now bank and prepare for the final fight. Bring good armour, a good weapon and high-healing food. Potions are optional. Once ready, head over to Zanik by the portal.

19. Talk to Zanik and tell her you’re ready to go. You both enter the portal and inside you’ll find the Bandos Avatar (level 125). Attack it until it is red-barred and Zanik will try to use the crossbow’s special attack on it but the Avatar smashes the crossbow. Pick up all the pieces and kill the avatars that attack you. Once you have all four pieces assemble them and red-bar the avatar again. Choose the option to use the crossbow special which will kill the avatar.

20. Now try to talk to Zanik and choose the option to sit next to her and then say nothing until she recovers. Pick up the pendant and give it to Zanik who’ll destroy it. She then tells you to head back out of the portal where a cutscene follows. Quest Complete! 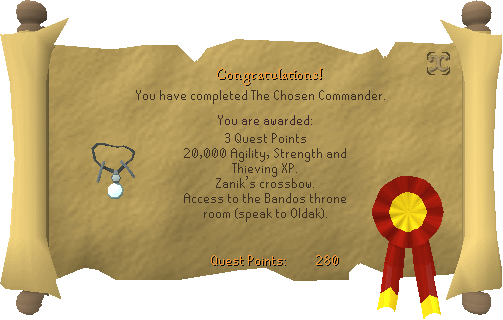