Starting the quest
1. You need to talk to Gypsy Aris who lives near Varrock square. She is in the red/white tent and she will ask you for some money for palm read.

She tells you that you are the chosen one who is going to save Varrock from a powerful demon named Delrith. She also tells you that you need a special sword named the Silverlight. This sword is very powerful and the only sword that can kill Delrith.

Getting the sword
2. To get the sword, you need to find a man named Sir Prysin who is living in Varrock Palace. He is located inside the palace in the south-eastern part. Tell him that Gypsy Aris said you should come and talk to him. He tells you that he has Silverlight, but it's in a locked chest that needs 3 keys to be opened. You will have to find these keys.

Finding the first key
3. Go to the kitchen, located in the northeastern part of the castle. Go upstairs, and pick up a bucket in one of the bedrooms. Go downstairs again, and use the bucket with the sink to fill it. Then, go outside the castle (there's a door in the kitchen), and you'll see a drain. Use the bucket of water with the drain.

4. When you use the bucket of water with the drain, you will hear the key fall down into the sewers. Go into the Varrock sewers through the manhole, which is located southeast of the drain. Take the north-western path, DON'T take the north-eastern path, and you will find the first key.

Finding the second key
5. Go to north-western corner of the castle and go up the stairs twice. Then, talk to Captain Rovin and he will give you the key.

Finding the third key
6. Make sure you have 25 bones, and go to the Wizard Tower south of Draynor Village. Climb up the ladder and speak to Wizard Traiborn. He wants 25 bones for the third key, so give him the bones.

7. Head back to Sir Prysin to give him the 3 keys and you will get the sword. Now, you'll have to fight Delrith.

Fighting Delrith
8. Talk to Gypsy Aris, and ask her what the magical incantation is. Make sure you remember it (preferably write it down), as you will need to recite the incantation word for word when you fight Delrith.

9. Wield the Silverlight sword and go to the stone circle, south of Varrock.

When you are fighting Delrith and he has nearly lost all his HP, 4 magic sentences will appear, and you will have to chose the right one that the Gypsy would have spoken about before, if you have forgotten it, then you should speak to her again and she will repeat the words. 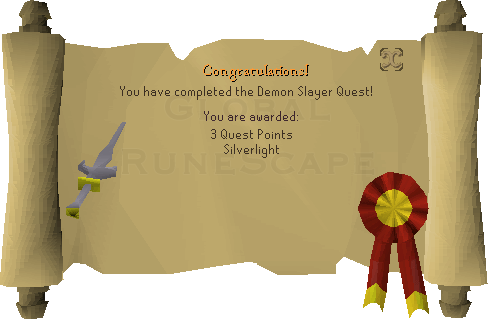 In case of death during/after the quest, should you lose Silverlight you are able to buy it back from Sir Prysin who miraculously found it for 500gp.