Vestri or Austri, either west or east of the White Wolf Mountain [map].

1. Talk to Vestri or Austri [map], and tell him that you want to be his friend.

He will tell you about a fishing contest, and gives you an application to enter the contest. The contest is held in Hemenster just north of Ardougne.

Preparing for the contest

2. Before going to the contest, you need some Red Vine Worm. To get the worms, you will your spade. Go to the McGroobers Woods, west of Seer's Village. [map] Find the loose railing in the northern area (beware of Guard dogs - level 44),

then go to the north-west side and find the red vines. Check the wines  you will get red vine worms. Collect around 5-10 of them.

3. Go out of the woods, and go south to Hemenster. Talk to Morris then enter the area and pay Bonzo 5 gp to enter the competiton.

He tells you to go to the willow trees. Don't do it, but go to where the the fishing spot next to the pipes, and try to fish.

4. A sinister stranger will tell you that this space is already taken. Ask him why he can't fish any other places, then use the garlic on the pipes, and you will be able to fish.

5. You will catch the biggest fish and win the trophy. Take the trophy back to Vestri/Austri, and he will reward you. 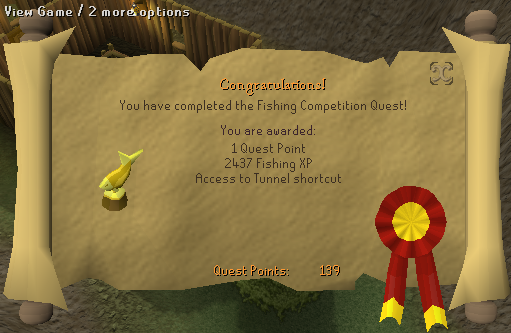