1. Talk to Syals in Taverley to begin the quest. He will offer you some 'magic' beans, in return he asks for two items, a Griffin feather and a Dwarven helmet. But first we shall get the Griffin feather from Grimgnash.

2. Go up to the White Wolf mountain, to the northeastern corner and talk to Grimgnash the Griffin. [map]

3. Speak to Grimgnash and tell him he is a mighty griffin, he will ask for a story: select the following storyline:

Note: If you enter the wrong storyline you will be hit for approximately 20 damage!

Once you have finished the story, take the feather. 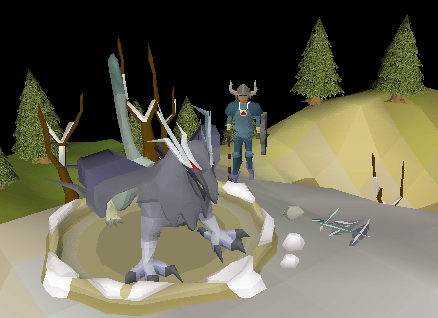 4. Now go back to Sylas and give him the feather.

5. Now to get the Dwarven helmet. Travel East out of the members gate, head north towards the Goblin Village, then just to the East of the Goblin Village, near the Mind Altar you will find Rupert's tower, The door is locked but there is a nearby crumbling wall you can climb over. [map]

6. Talk to the Drain Pipe. Rupert the Beard will answer you. After the first conversation, the Princess will notice and the conversation will seize.

7. Talk to the the Drain Pipe again and tell Rupert you have an idea. Choose 'I could try and climb up', then ask 'Is there anything up there that can help'. He will then let his beard down. 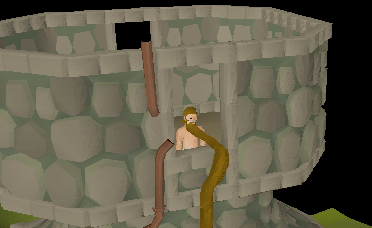 8. Climb up his... really... long... beard. Talk to him. After a conversation he will ask you to talk to Princess Miazrqa.

9. Talk to her, and you will need to choose 'Your Second-cousin, twice removed?' when it prompts you. Now, continue the conversation and select all the possible questions until you get a spare door key to the Witch's house, she will ask you to get her pendant from the house.

10. Go into the witch's house in Taverley, go downstairs, open the gates and search the music stand, you will be given a music sheet with some notes. (Note: You must be wearing non-metal gloves to open the gate)

11. Go out of the gates and go to the piano, play it as shown on the music sheet above. After you enter the correct tune, a compartment will open. Search it and you will get a to-do list, a shrinking recipe, and two shrunk ogleroots.

12. Mix the tarromin with the water filled vials, then add the shrunk ogleroots. You will now have two Shrink Me Quick potions.

13. Return to the ground floor and then go into the southern room, you will see a witch glyph on the wall, drink your Shrink Me Quick potion and you will soon shrink to the size of a rat and be able to walk through the hole. 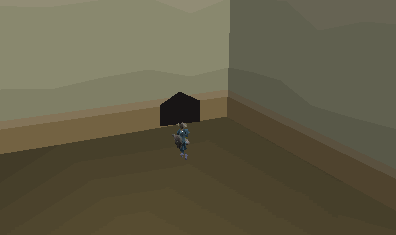 14. You will now be attacked by level 95 Mice, follow these directions to reach the pendant:

15. Take the pendant and then return it to the princess and she will free Rupert, speak to Rupert and receive his helmet. 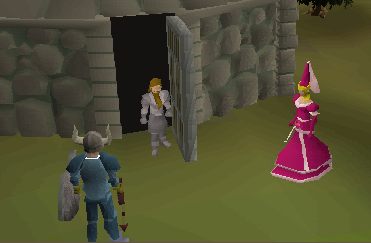 17. Plant the beans in the nearby patch, east of the herblore shop. Water it and it will become HUGE! If you need any farming tools there is a nearby Tool Leprechaun north-east at the tree patch.[map] 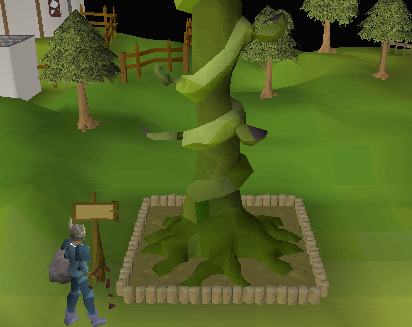 18. Get out all armour, weapons and food you'll need to fight a level 138 giant! Climb up the Beanstalk, and attack Glod, be careful as he hits 15-20 frequently and drains prayer rapidly, he also randomly turns your protection prayers off. Once you have defeated Glod take the golden goblin. 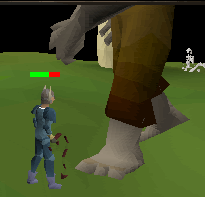 19. Now go back to Sylas once again, he will ask that you chop the beanstalk to prevent further attacks from giants. To chop it down, you will need to make it thinner. Use the second shrink me quick potion on the Beanstalk. It will begin to shrink!

20. Chop the tree and then return to Sylas to claim your reward. 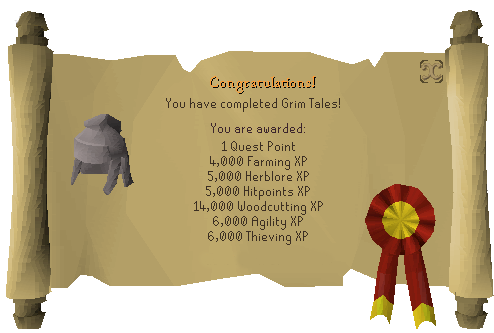