Talk to Kennith in the westernmost house in Witchaven, East of Ardougne.

1. Talk to Kennith [map]. He has noticed that the villagers of Witchaven are acting more weirdly than usual and they have been digging under the shrine to the West. He sends you to go and investigate.

2. Head West, where you will see a dungeon sign and climb down the old ruin entrance.

3. Enter the wall opening to the East as soon as you get down. 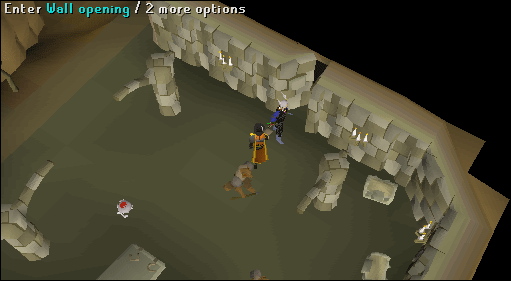 4. Next, follow the long path and take the agility shortcut via the hole in the wall if possible. Eventually you will reach a pile of rocks which you have to climb over. Once over, talk to the villagers but they will refuse to let you proceed into the next tunnel. Return to Kennith, back the way you came and talk to him again.

5. However now Kennith is more worried about where his parents are rather than the unusual activities of the villagers. Walk to the East and after the church you will find his parents, Kent and Caroline. Kent hands you a slip, telling you to meet him at the Legends Guild gate as soon as possible. 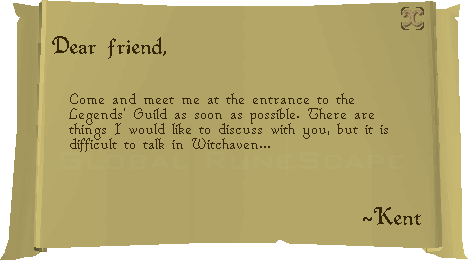 6. Head to the Legends Guild, directly North of Witchaven. Talk to Kent and he asks you to go make sure that Kennith's friend Kimberley is alright. 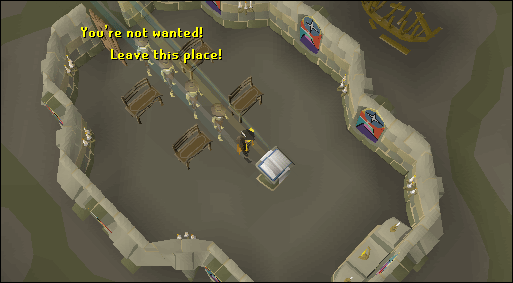 8. Kimberley now takes you to Kennith's house. Talking to Kennith will start another cut scene with another four villagers outside the house. Once again, get them to follow you into the church and trap them in there. Then go back to Kennith's house and talk to Kimberley.

10. Once in there Ezekial tells you to go through the wooden door and then unlock the metal door from behind. Go through the door and while the villagers have their back turned, click the nearest cart to hide behind it. Do this with the next two carts and then make your way around the room until you reach a small crack in the Eastern wall. Prospect it and then mine it. 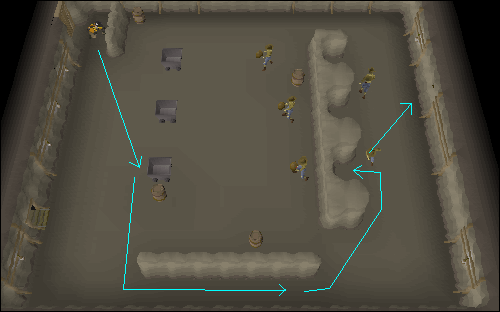 11. After getting through the crack, follow the path until you reach a lever. Pull it. This will let Ezekial through the door. Now go through the wooden door near the crack where you entered.

12. Now you come to another room where you have to mine rubium and put them in the steam vents to make the villagers collapse. Make sure the villagers don't see you. Once through, talk to Ezekial again.

13. You now go through another large door and appear in a similar room where you have to put rubium in the vents. Then proceed through the door on the eastern side of the wall. Yet again you have to avoid being spotted by the villagers.

14. In this room you find Kimberley's parents who ask you to go back and check on her. Now go back the way you came. You will find Kennith in the last room before you exit the mines. Kennith will go crazy as Kimberley has lost his train and a short cut scene follows. You have to find Kennith's toy train to make him stop.

15. Return to Witchaven either through the tunnel or teleport to Ardougne and walk from there. The train will be lying somewhere on the ground near one of the buildings. The location is different for everyone. Once you find it go back to the mines and give the train to Kennith. 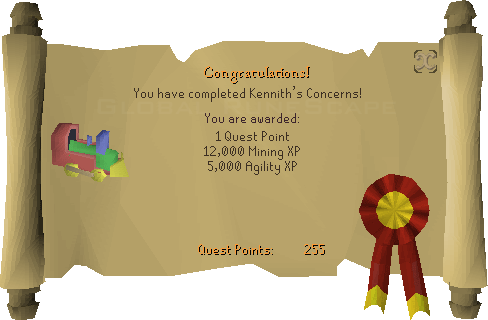 Ezekial will buy all rubidium at the price of 10gp each.

Go to the final room in the mines to talk to Kimberley and her family. They will ask you for a variety of items which they trade 2 coal for each.