1. Talk to the Mercenary Adventurer. He says he’s seen something strange at the entrance to Paterdomus and asks you to go and warn Drezel. Head west and down the trapdoor. Then follow the path north and talk to Drezel. 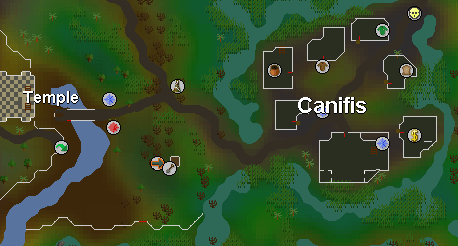 2. Drezel then asks you to go and investigate about the strange people coming into the temple and to see the burial chamber that he has found. Now head west into the next room and go down the stairs in the northern wall. 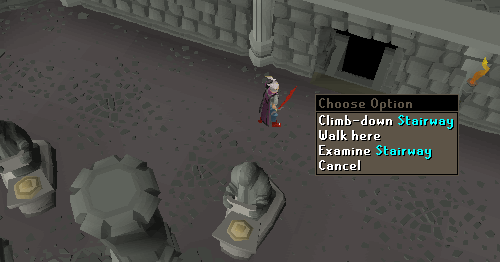 3. Just a few steps northeast from where you enter you will be able to search wall storage. Do so and you will find a blood talisman but you’re unable to get it. Now go back upstairs and then west again, past the temple guardian until you come up outside. 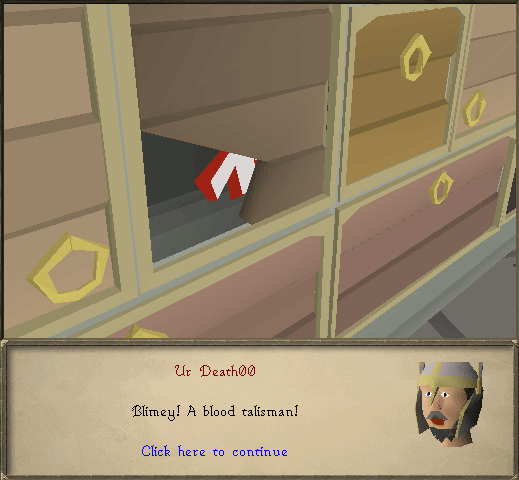 4. Enter the temple and head all the way upstairs. You enter a cutscene where you will see the 6 mysterious people plotting. They spot you and teleport, leaving two guards behind for you to fight. You will be able to hit them once before they pray against that type of attack. So switch between two attack styles of your choice. Range and Melee recommended as both the guards seem very resistant towards magic. 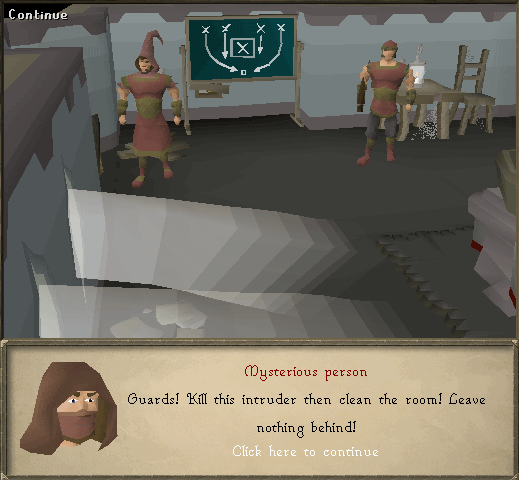 5. Once you have defeated them they will teleport away and you are left to search for clues. Search the crude table in the northwest corner and return to Drezel with the book page and the glove. He now asks you to escort the Mercenary Aventurer to Burgh de Rott.

7. Head over to the inn’s basement, you have to climb over the rubble to get to the trapdoor, and talk to Veliaf and tell him everything you know so far and then ask for a job. You will be given a crate of provision to transport over to Safalaan in the Sanguinesti region. Head southeast and take the boat to Sanguinesti. Jump over and on to the wall and follow the path. You now have three options.

Option 1: Kick through the floorboards and take the long route through the city, from house to house as you did in The Darkness of Hallowvale quest.

Option 2: Kick through the floorboards but use the Shortcut key to just walk through the different sectors between the houses.

Option 3: Get caught by one of the Vyrewatch and ask to be sent to the mines. Ask one of the workers there for a spare pickaxe if you don’t have one and then mine 15 ores and put them in the cart. After that talk to one of the guards to be released and head south.

To get to the base from the mine exit: 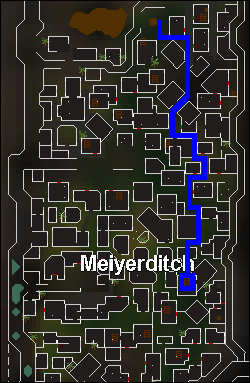 8. Press the decorated wall with the sickle on it to reveal the lumpy opening in the rug and enter it. Head all the way north and talk to Safalaan who will tell you to talk to Flaygian Srewte instead who is right next to him. Deliver the crate and then ask him how his research is going and then if you can help him. He tells you to and ask some of the local fighters about the weapon that could possibly be effective against the vyrewatch. Talk to one of the men wielding a silver sickle in the same room and he will tell you the answer is a flail and that there is a book lying around about it.

9. Walk south to the room with all the beds and lockers. Search the second bed from the east, northern wall, and you will find the book. Read it and then go back and talk to Flaygian. He will ask you for the page number so read your book and write down the page number about flails, this number varies per person. Then he hands you a hammer and 10 nails and tells you to find the furnace in one of the northern houses.

10. Head north and use your nails on the wooden post. Climb up the wooden post then jump from the floorboards over to the damaged wall. First go upstairs and search the trough. Then take coal, a tinderbox and a pickaxe from the crates. Now head all the way downstairs and right click the debris to excavate the furnace. Then put the coal into the furnace and light it with the tinderbox. Return to Flaygian. 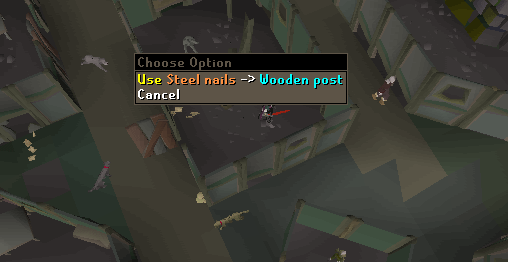 11. He tells you that you now need to make a silvthril chain. Search the barrel in the northern area of the room and you will get 2 mithril and 2 silver bars. Then head southeast to the room next to the exit ladder and search the crate in the corner to get the chain link mould. Now head back to the furnace.

12. Use one of your bars on the furnace and choose the silvthril chain option. Head back to Flaygian again and then search the shelf on the southwestern wall to get a blessed silver sickle. Use the sickle on Flaygian and he will take the sickle and the chain and then tell you to talk to Safalaan. Talk to Safalaan and he tells you to go to the laboratory. [map] Take a saw and chisel from the tool rack. After Safalaan’s joke walk over to the doors and use your saw on the right one. Climb through the hole and the others will go ahead and tell you to catch up. 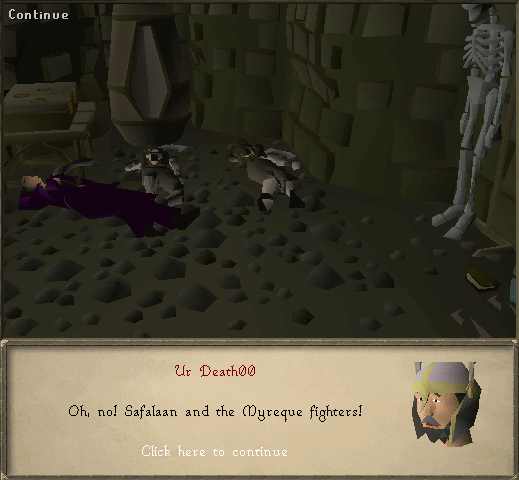 13. Follow the path past the mutated bloodvelds and follow the path heading west. You will reach a large room, enter it and head towards the centre where you will meet Safalaan. Walk north and search the rocks as Safalaan told you to then report back to him. You will be attacked by two vyrewatch who quickly kill both the fighters. Safalaan gets weaker and weaker but you eventually both escape back to base. 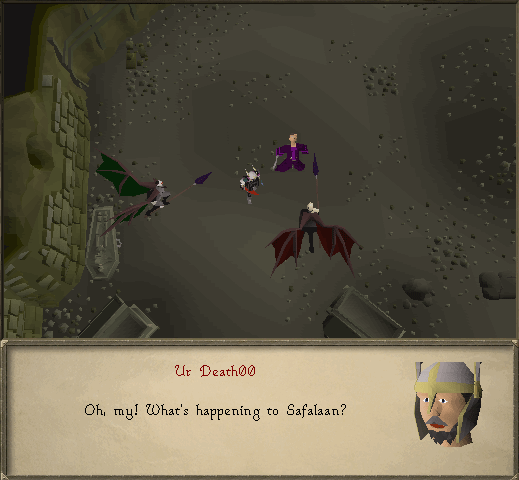 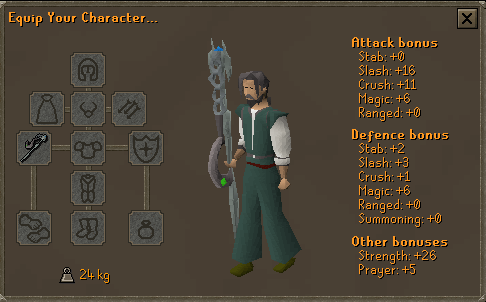 15. He tells you to go test the flail on a vyrewatch so head up the stairs and kill one. Pick up the vyre corpse after you’ve done so and return to Safalaan. Since Flaygian isn’t back yet he tells you to report to Veliaf in Burgh de Rott. So make your way back either climbing from house to house or using your shortcut key. 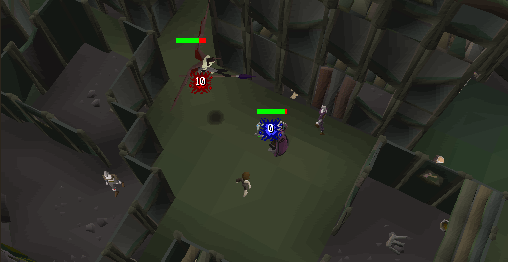 16. Tell Veliaf everything and then ask him what you should do. He tells you to go talk to Drezel again. Head back to the priest by either the boat or teleporting and show him the vyre corpse. After talking to him head down to the burial chamber where you first saw the blood talisman and create a pyre by putting the log on one of the pyres. Add the corpse and then light it. The spirit is released and you get a key which you can take from the stone stand. 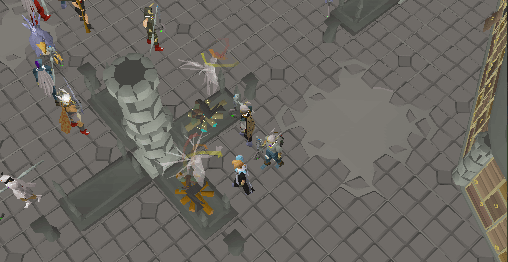 17. Unlock the locker with the blood talisman in it. You receive a talisman and this triggers a cutscene. Return to Drezel and ask him what to do and then go back to Veliaf, once again. Finish talking to him and the quest is now complete! 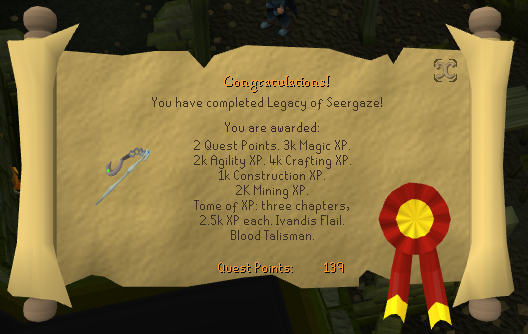 The tome of experience that you get as a reward can only be used on skills above level 35.

Burning more vyre corpses will result in more keys being given which unlock other parts of the burial chamber for more rewards.

An agility shortcut requiring level 65 agility can be used between Canifis and the laboratory in Meiyerditch. The laboratory is also filled with slayer monsters such as bloodvelds and crawling hands. The Blood Altar is also located here.

The slayer monster area is multicombat and therefore an ideal place for using a cannon when on tasks.

To get a pyre log use sacred oil on any kind of log. The higher the type of log the more oil is needed. Sacred oil is obtained by doing the temple building minigame from Shades of Mort'ton. Use olive oil bought from the general store on the flame in the temple when you have your sanctity over 14. Each use takes 3.5% sanctity off. World 77 is the official world for the minigame. You also need 77 Runecrafting to make blood runes.