Talk to Chieftain Hamal. He is located at the Mountain Camp east of Rellekka. [map]

1 To get to Mountain camp, you'll need to go to Rellekka, and walk east of it. Eventually, you'll get into a part that starts looking like the mountains.

You'll need to walk up a slope, and stand next to a boulder that has an option to push it. 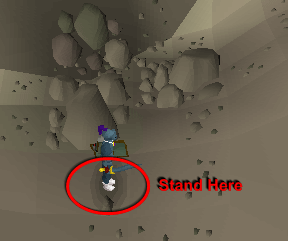 2. Now, use your rope on the boulder to help you down the cliff. 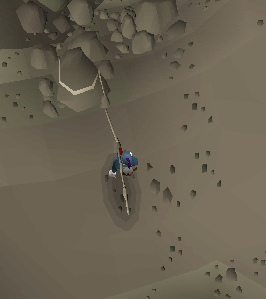 4. Go in the tent that is east of the fire, and talk to Hamal the Chieftan. He tells you his daughter is missing and that he doesn't employ outlanders.

5. Now that you've started the quest, go out of the tent, and head south. You will find a puddle of mud. You will need to dig below roots, and get some mud. 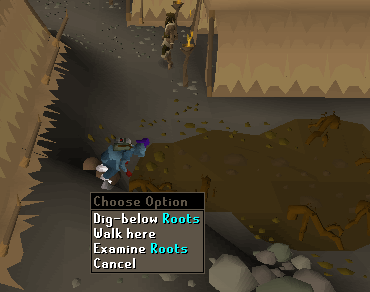 6. Go north of the chieftan's tent into the fenced area where the mountain goats are. You will find a spot where a pole spawns right next to Jokul's tent. Pick it up.

7. Follow the path that goes up to the Shining Pool until you get to a man named Ragnar. Talk to him. He tells you that he was going to marry the Chieftan's daughter, Asleif.

8. After you talk to him, use the mud with the tall tree that is right beside you, and climb it to the island. 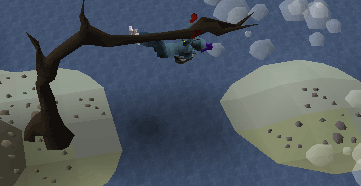 9. Now, use your pole with the clump of rocks to get to the island that's north of you.

10. Finally, use your plank on the flat stone to get to the next island.

11. Now, listen to the Shining Pool. The voice of Asleif will give you two things to do: 1) Make peace between Rellekka and Mountain Camp. 2) Find a new source of food. 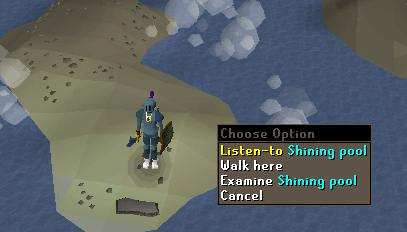 12. Now, use the plank on the flat stone, and it'll ask if you want to go back to shore. Click "yes". Walk back to Hamal the Chieftan and talk to him about what you just heard. He'll talk about Svidi, and that he's missing. Tell him you'll help look for him.

13. Walk over to Rellekka and talk to Brundt the Chieftan. He can be found in the bar directly north of when you enter Rellekka. He'll tell you he hasn't seen any mountain campers in years, and that he's not holding anyone captive.

14. Go outside of Rellekka's frences on the east side. You will find Svidi wandering around. Talk to him. He'll tell you he hasn't gone to Rellekka yet because he's afraid of them killing him. Tell him you'll help him get in there safely.

15. Go back to Rellekka and talk to Brundt the Chieftan again. He'll agree to meet Svidi as long as they get their ancient rock back from the Mountain Campers. If you didn't bring a pickaxe, then go up north near the rock crabs, and there will be a iron pickaxe spawn there.

16. Go back to the mud puddle, and pick up a muddy rock on the ground. (The guard will now let you pass the rockslide. So, you don't need to enter by using the rope anymore.) Walk inside the big tent that's west of the mud puddle, and use your pickaxe on the ancient rock inside. You will receive half a rock. 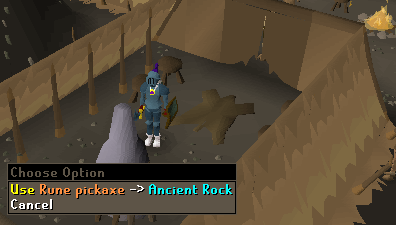 17. Walk outside the tent. The guard will stop you, and you'll automatically show him the muddy rock that you picked up earlier. He'll let you go.

18. Go back to Brundt the Chieftan, and give him the rock. He'll then give you a message of safety for Svidi.

19. Take the message to Svidi, and he agrees to meet with Brundt.

20. Go back to Hamal the Chieftan and talk to him about the meeting. He says you're very bold and thanks you for your help.

21. Go over to the goat pen, and talk to Jokul. He'll tell you about the White Pearl fruit that grows on mountains.

22. Put on your Gloves (check needed items to make sure your gloves are okay), and go to White Wolf Mountain. [map] Pick from the Thorny bushes to get the fruit. Eat the fruit, and take the seed to Hamal the Chieftan. 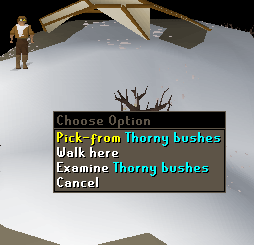 23. Go back to the pool and talk to Asleif. She wants you to convince to her father that she is dead. She tells you that she died from a creature, while sitting at the lake.

24. Go back to Hamal the Chieftan, and talk to him. You'll tell him that his daughter is dead, but he wants proof. Go back to the Shinning Pool, and walk around it until you get to a cluster of dead trees. Use your axe to cut down dead trees so you can get to the cave. 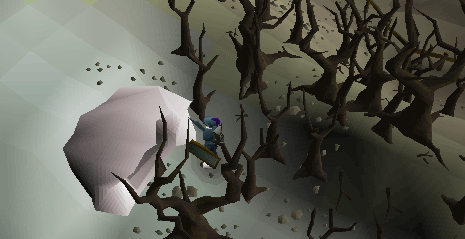 25. Enter the cave, and follow the path until you come to Kendal. Talk to him and tell him you're no one special. After some talking, ask him if he means a sacrafice. Now, tell him he looks like a man in a bearsuit. After a lot of dialouge, you will need to fight him. 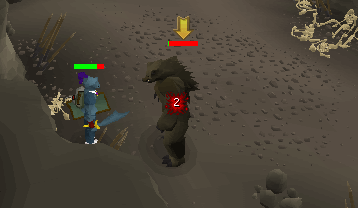 26. After you've killed Kendal, take the "Corpse of woman" from the center of the room, and take it to Hamal the Chieftan. He wants you to bury her on the island that you talk to her from, along with one of her possessions and five muddy rocks.

27. Pick up five muddy rocks from the goat pen, and go talk to Ragnar by the pool. He'll give you Asleif's necklace. Go to the middle island, and bury her.