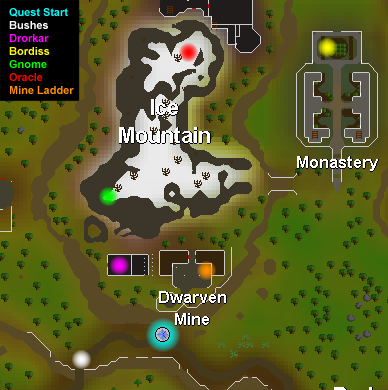 1. To start, speak to Lakki the delivery dwarf. He's standing next to a broken cart on the road between Falador and the Barbarian Village. He'll tell you that he's lost a crate. Offer to help him look for the crate. The crate is in one of the bushes along the road to the west of you. Search them until you find the crate.

2. Go to the entrance to the dwarven mines near Ice Mountain. Walk west to the power station and talk to Drorkar and give him the crate. After the cutscene, Drorkar will give you a letter. Take it to Brother Bordiss, located in the monastery's garden to the north-east of the mine entrance. Bordiss gets upset over the letter, saying that Drorkar is taunting him in it about how his machine is operational.

3. At the end of the conversation, Brother Althric will realize that his roses are dying. Ask him why and he'll say that it's because of the climate getting hotter. Althric will ask you to apply compost to the roses and water them. Talk the Althric again after you've gotten the compost and water. Use the compost and watering can on the dying roses. After that, a cutscene will start.

4. Walk west up onto Ice Mountain. You'll find the gnome on the south-west part of the mountain. Talk to him. He'll say that he's catching baby ice fiends to save them from extinction. Ask him if you can help and he'll give you a special net for catching them. Get four and talk to him again.

5. An avalanche! Talk to the Oracle on the north side of Ice Mountain and she'll tell you that the avalanche wrecked her tent; offer to fix it for her. Walk down to where the tent is and pick it up. If you don't have them already, go get a hammer, saw, two nails, and two planks. Walk back to the Oracle's area and use the tent on the remains with everything in your inventory to fix it. The Oracle will see a vision of runescape, but in ruins. It's clear that you need to shut down Drorkar's power station.

6. Talk to Drorkar again about shutting down the station and he'll tell you to talk to Nurmof, the pickaxe seller in the dwarven mines. Before you see Nurmof, pickpocket Drorkar for a key. After that, walk east, down the ladder into the mines, and around to an area just to the west of the ladder up. (if you need it, a map to the dwarven mines can be found here)

7. Speak with Nurmof and he will mention that Bordiss had an idea for a safer energy source. Ask Bordiss at the monastery about it. He'll say he lost the key to the chest with his plans the night before the presentation of the plans, and that the key you took from Drorkar is the key to his chest. Go back down into the mines. This time, walk east from the ladder to Drogo's shop.

8. Open the chest there and take the plans. Give these plans to Nurmof. A cutscene about the new powerstation, a windmill, will begin. 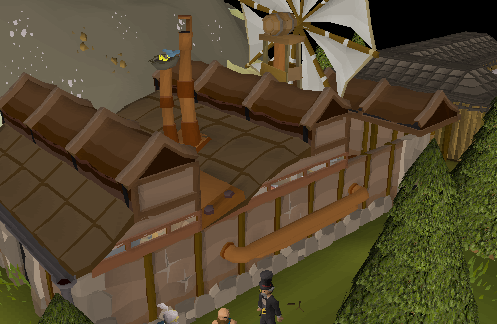 The power station ladder can be used to quickly access Nurmof's pickaxe store and the Keldagrim-Ice Mountain mine cart track in the dwarven mines.