1. Talk to King Roald in Varrock Palace, north of the main square in Varrock [map]. He will ask you to check on Drezel, in the Guardian Temple north-east of Varrock.

2. The temple is located north-east of Varrock, east of the Earth Altar [map]. Knock on the front door of the temple (right-click and select Knock on). Some monks inside will tell you that you need to kill a dog. Tell him that you will.

3. The dog is in the dungeon just north of the entrance of the temple. Go downstairs, and kill the Temple Guardian (level 30).

4. When you've killed the Temple Guardian, head back to the temple and knock on the door again. A monk inside will tell you to speak to King Roald.

5. Head back to King Roald, where you started the quest. King Roald will be quite mad at you. The temple guardian was supposed to guard the palace, and you ask him what you can do to make it good again.

6. Go back to the temple, but now, just enter it, and go up two ladders. 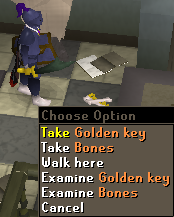 7. Talk to Drezel, and he'll tell you a long story. He tells you that he can't get out of the cell, even with a key. He can't get out because of a vampire from the old times has survived, and is in the coffin. Then, kill the level 30 Monks of Zamorak. Keep killing them until you get a key. Once you've got one, go out of the temple and into the dungeon where you killed the Temple Guardian. Go further into the cave, and study the monuments. When you find a monument with an iron key, "use" the key you got from the monk on that monument to get the iron key. Then, use your bucket on the well to get some water. 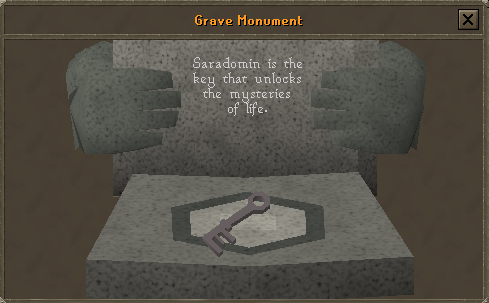 8. Head back to Drezel in the temple, and use the iron key on the cell door. Talk to him and give him the water so he can bless it.

9. Use the blessed water on the coffin in the centre of the room. Then, talk to Drezel again. He will tell you that he will meet you down by the monument.

10. Head back to the dungeon, and continue to the north-east gate. There, you'll find Drezel. Talk to him, and he'll tell you that the river has been unblessed. You'll suggest that you can use Rune Essences. Now, you'll need to give him 50 un-noted rune essences, so you will have to bank atleast once. When you've given him all essences, you will complete the quest. 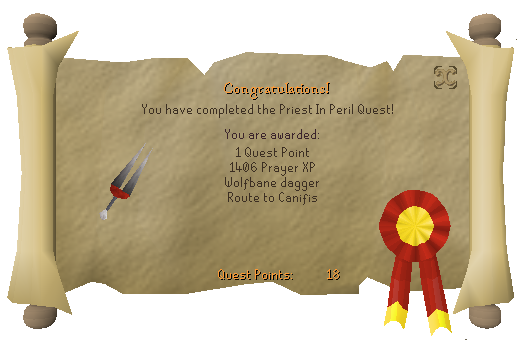 After you complete the quest, you have to speak to Drezel before going into Morytania.