Talk to Father Aereck in the Lumbridge Chapel.

1. Talk to Father Aereck and tell him you want a quest, he'll tell you there is a ghost that he wants you to get rid of. Father Aereck suggests you have a chat with a fellow by the name of Father Urhney, he at least has some knowledge of ghosts. Father Aereck is even nice enough to tell you where you can find this Urhney chap.

2. When you first chat with Father Urhney, say that Father Aereck sent you otherwise he will be very rude. Once you talk to Father Urhney he will give you a Ghostspeak Amulet, which surprisingly gives you the power to speak with ghosts.If you lose it at anytime you are able to go back and chat with him again, asking for another one.

4. Talk to the Restless Ghost and he will say a warlock has stolen his Skull. To get the ghosts Skull back you must go to the Wizards Tower. Once in the Wizards Tower take the ladder which is leading down.

5. You will be in the dungeon, follow the path round until you come to a door on the East. Go into the room and go to the end room. There will be an altar there. Search it, and you receive a Skull. As this happens, a level 13 Skeleton appears. You do not have to fight it, you can RUN! 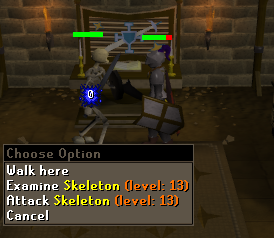 6. Now head back to the graveyard, open the coffin and put the Skull in. Watch the short cut-scene in which the ghost thanks you and then disappears over to the other side. Congratulations! Quest completed! 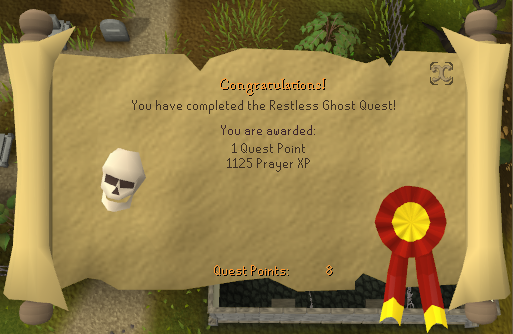 When you finish the quest, you can go back to Father Aereck and he will give you five ancient bones. Each bone gives 200 experience when buried.