Talk to Advisor Ghrim, in the castle in Miscellania. 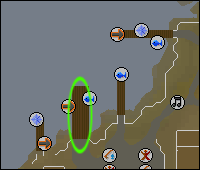 1. Go to Rellekka and ask the sailor on the docks to sail you to Miscellania.

Go north-west until you reach the castle and go upstairs. Talk with Advisor Ghrim to start the quest. He tells you that King Vargas is going to declare war against the queen once more.

He asks you to talk to the Prince and the Princess in the rooms next to the throne room for more information. When talking to one of them you will see a cutscene. They want you to get the King and the Queen to marry each other.

2. Talk to King Vargas. He will explain that there are some villagers that have lost their resources.

3. You must talk to one of these persons; Gunnhild, Leif, or Magnus [map]

They will tell you that Etceterian soldiers came and demanded tithes from them. They refused, and found the next day that some of their goods had been stolen.

4. Go to the Queen's castle (on the other island to the east), go upstairs, and talk to Queen Sigrid. She tells you that some of her villagers have lost their resources and tell that it's Vargas for sure. Go outside the castle, and talk to any villager. They will tell you that Miscellanian soldiers came and wanted they pay a tribute. They told them to go away, but next morning they had lost some of their resources.

5. Go back to Queen Sigrid and tell her what happened. She will blame King Vargas. Go to King Vargas and tell him the same story. He will say that you should talk to Advisor Ghrim. Ghrim tells you that if it's not any from the islands stealing the goods, so it must be some outlanders. He will ask you to speak to the sailor.

6. Go to the docks and talk to the sailor. The sailor tells you that some kids from Rellekka were visiting some relatives in the Dungeon.

8. Now go downstairs and you will see the dungeon icon (

) on your minimap. When trying to climb down you will be stopped by the guard. He have orders from the King that no-one is allowed to enter. You will show him the scroll and be sent down.

9. When you're in the dungeon, walk north. Talk to the dwarf Thorodin. He will tell you that one of his workers, Donal, saw a monster when working. He went in to investigate and after a while came out shaking. He have been in the pub ever since.

10. Go to the pub located in the east of the Dungeon and talk to Donal. He will tell you that he saw a monster with large teeth and big red eyes. He wants you to deal with the monster and tell you how he got in. He will also give you a mining prop.

11. Go back to where Thorodin is and you will see a crevice in the wall. Use your mining prop and squeeze through. Now you will be in a small room with some crates and an engine.

12. Take the plank and enter the tunnel. Now go east until you reach the river. Use your rope on the rocks to cross the river. Follow the tunnel until you see some fire remains. Search them to get a diary page.

13. Use your planks with the rocks to cross the river. Repeat until you've made it across all the slippery rocks.

Follow the path and collect diary pages from the fire remains as you go. At one point there will be steam vents on the ground. Be sure to avoid these, otherwise you will lose a small amount of life points.

They will tell you that they hide the crates and barrel a safe place. But when they came back a giant snake have made a nest out of the barrel and crates. They want you to kill it.

15. Now continue north, don't waste your time on the snakes (level 62 and level 90, NOT aggressive).

16. At the end you will see a crevice. It might be a good idea to use protect from melee before you go through the crevice. Now you have to kill the level 149 Giant snake.

NOTE: He is aggressive and will poison you!

17. When you have defeated it, he drops a giant bone, a Heavy box and another item.

18. Go back through the crevice, and you will see that a guard has thrown down a rope for you. Climb up and go talk to the Queen. She will give you a letter and 20,000 gp. Go back to King Vargas to give him the letter and complete the quest. Congratulations! 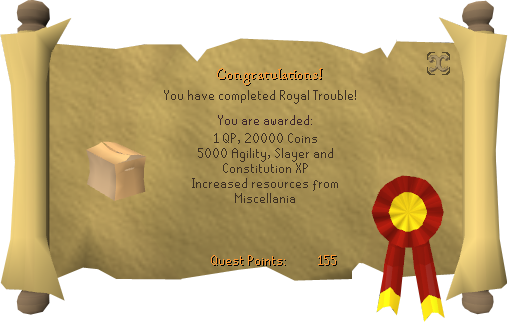