On speaking to Thormac he will tell you that three of his Kharid scorpions have escaped. He wants you to find them for him, and gives you a scorpion cage. Head to the Seer's Village to get information on the scorpions location.

After talking to the seer in Seer's Village, he should tell you that the first scorpion missing can be found in a secret room near some nasty spiders with coffins nearby – the room near the poison spiders in Taverley Dungeon.

It is suggested that you bring some food and antipoisons, as some of the monsters in the Taverley dungeon may cause high damage, and you may get poisoned by poisonous spiders.

Get your dusty key, anti-poison and anti-dragon shield ready and head down into Taverley Dungeon. Run through the dungeon going southwards until you reach the chaos dwarves, then take the west bridge across then go north into the lesser demon area, use your dusty key on the gate to get into the blue dragon compound.

Note: Have your anti-dragon shield equipped at this part! Blue dragons can hit up to 490 life points with their flames.

Walk past the dragons and south into the baby blue dragon area, where you can fish lava eels for the Hero's Quest. Now run north past the black demons to reach the poison spiders. 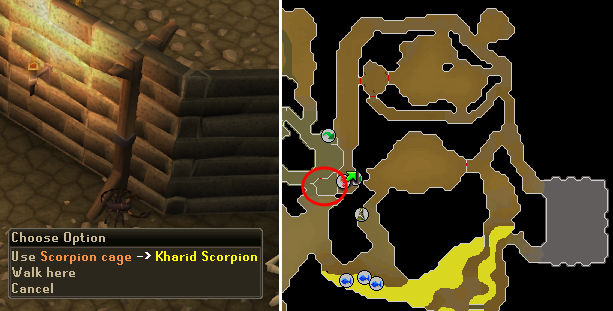 Use your scorpion cage with the Kharid scorpion (don't pick-up, otherwise it will sting you and hit 30). Now head back to the Seer for information on the second scorpion.

After speaking to the seer for the second time you will be informed that the second scorpion is in a village of uncivilised axe-wielding warriors – the barbarian outpost.

Now getting this scorpion may be a bit harder than the last one as you will need to complete a mini quest to enter, the Alfred Grimhand Barcrawl. If you haven't completed it, you will have to do the mini-quest now. When you've done the barcrawl, continue on the quest.

Now on entering the barbarian outpost you should be able to easily spot the Kharid scorpion running around, if you can't see it try looking around the buildings.

Upon speaking to the Seer for the last time you will have been told he can be found in a room with brown clothing on a table upstairs in the prayer guild.

Head to the Prayer Guild (31 Prayer needed), it can be found west of Edgeville. Climb up the ladder and walk around until you find the last Kharid scorpion, for the last time, use your scorpion cage on the Kharid scorpion.

Once you have all 3 scorpions, head back to Thormac to claim your reward. Congratulations! 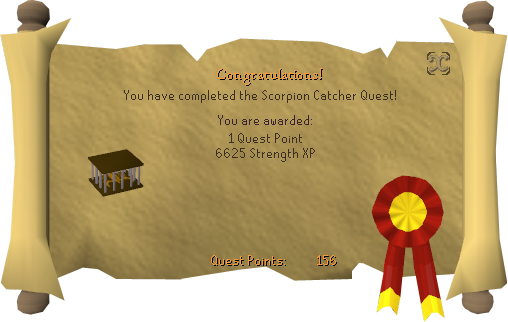 Thormac will also enchant all battlestaffs into mystic staffs for you. This costs 40,000gp per staff. 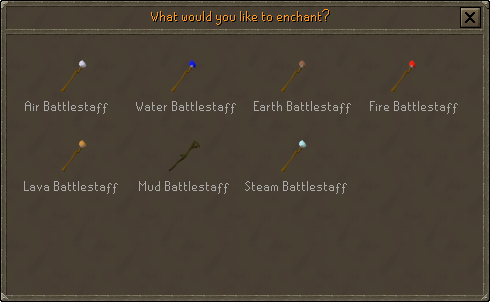