Northwest of the Digsite. Speak to Launa.

Go to the digsite using the glider (gnome) or walking from Varrock, and walk north-west to the rift. Talk to launa and accept the challenge she gives you. Then, use the rope on the rift and go down.

A short cutscene will play of 'Tolna' talking.

You will now see a rage bar at the top of your screen. You need to fill this bar by to pass to the next room.

There are 4 creatures in this room using the correct weapon you can kill these creatures and fill your rage bar.

Get the correct weapon from the weapon case:

When your anger bar completes a cutscene will play and you will be taken to the next room.

Walk round the room looking into all of the black holes killing the Fear Reapers as they appear. 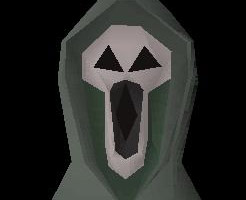 After killing five fear reapers, another cutscene will play. Then, walk through the black hole to the west.

In this room, there are many fake monsters and one real monster in the group. When attacking the fake monsters they will dissapear, but after killing the right monster 5 times, the fake doors will disappear and you will be left with a cutscene. Walk through the real door.

Hopelessness creatures will crawl along attacking you agressivly using some type of blue balls which actually do nothing, althought with melee they can hit something. After killing them once, you will then need to kill them again two more times as they refill their health.

On killing them a cutscene will play. Then, cross the gap using the bridge of hope.

Watch the cutscene, then attack the three heads you should see in the room. After killing them, Tolna will appear out of nowhere.

After another cutscene talk to him and he will be teleported back out of the rift, talk to Tolna again to complete the quest.