Talk to Maggie at her encampment west of the Legends' Guild 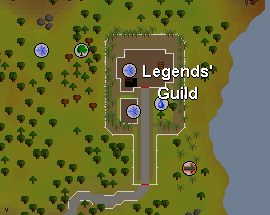 1. Start by telling Maggie something smells interesting. She's making a special brew but needs to stir it with an enchanted broom. She asks you to get Hetty, Betty and Aggie to enchant the broom for her and gives you a broom to take with you. 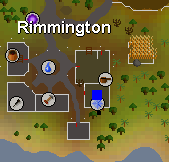 2. Head south to Rimmington and Hetty is in the house furthest southeast (blue dot). Her enchantment is an ointment but she wants a newt in return and asks you to go down to her cellar to get a newt.

3. Just south of the house there is a trap door here Hetty's cellar is. Once down there, talk to Gus the delivery ghoul. He will tell you that the labels have been mixed up and there is one crate with newts, one with toads and one that's mixed. Agree to help him label everything correctly, if you label them wrongly then you can just talk to Gus again to reset it. The way to do this is pick any crate and extract a creature. Depending on the creature, label that crate either frogs or newts. Then the two remaining crates are labelled wrong so you just use the other label than the one on the crate already. Since the first crate could also be mixed you may get it wrong the first time but in that case Gus will tell you after you've labelled all the crates and you can change the first crate to mixed and vice versa.

4. Once you've labelled all the crates correctly Gus will let you take a newt from the newt crate. Head back upstairs and talk to Hetty to receive the ointment. Use the ointment on the broom to complete the first enchantment. 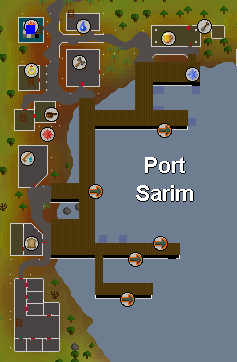 5. Betty is found in Port Sarim's magic shop, east of Rimmington (blue dot). Speak to her and she will tell you that she needs her wand to perform the enchantment. It is locked in a chest in her cellar.

6.Go down the trapdoor and talk to Lottie. She explains that the chest won't open until you have placed each creature in the right cage. However you can only carry one creature at a time and you can't carry a creature into a chamber which contains another creature. This will cause one of the creatures to escape and you will have to talk to Lottie to reset everything. The arrangement varies for each person, however here is an example. 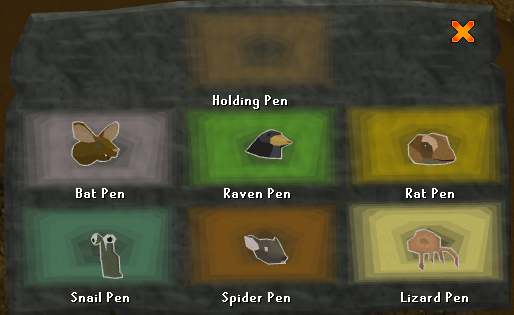 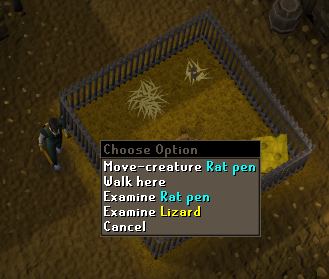 8.When each creature is back in their respective cages head to the northwest of the room. Open and search the chest to find Betty's wand. Then go back upstairs and talk to Betty who will then enchant the broom for you. 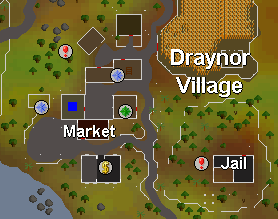 9.Now walk east again to Draynor Village, where you will find Aggie in her house (blue dot). Talk to her and she will ask you if you want her to teleport you to a quieter place where you can talk. Accept and you will be teleported to a small clearing.

10.Talk to Aggie again and she explains that to enchant the broom you need to erase 4 of the 16 lines of sand to leave behind 4 small triangles. Erase the following:

Once your broom is enchanted talk to Aggie and return to Draynor.

11.Return to Maggie and tell her you have good news. Accept to stir the cauldron with the broom, stir it and then talk to Maggie again for your reward. 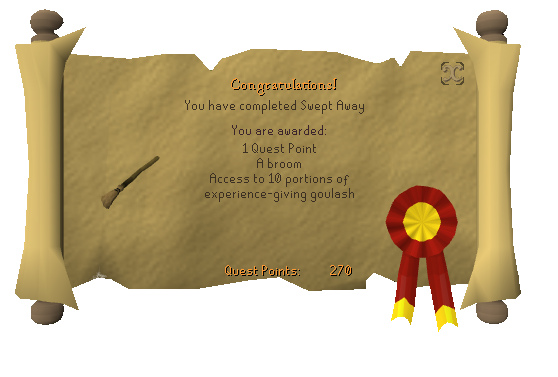 Open the chest to get the magical unguent. Return to Wendy to dye your cat purple. To dye a cat purple again you just need to talk to Wendy.