Talk to Lucien in the Flying Horse Inn in Ardougne [map].

1. Start the quest by talking to Lucien in the Flying Horse Inn. Tell him that you're a great hero. He says that he wants you to get the Staff of Armadyl from the Temple of Ikov (located near Hemenster). He also tells you that the monster that guards the Staff, can only be slayed with a weapon of ice. Then, he gives you a Pendant of Lucien.

2. Before going to the temple, bring the Lit Candle, and a Knife or a sword, or other sharp weapon to cut a web. You can also bring some armour, but remember that your total weight has to be 3kg or less! Remember to equip the Pendant of Lucien too.

3. When you have the items, head to the Temple of Ikov. The temple is located east of the Fishing Guild, and just southeast of the Rangers Guild [map]. When you're there, climb down the ladder. Go to the west, and go down the stairs in the end. You will see a web. Slash it, go through the slashed web, and pick up the Boots of Lightness. Wear them. The boots will make you 4kg lighter.

4. Go up the stairs again, and go through the gate leading to the skeletons (level 45). Make sure you are wearing the Pendant of Lucien, else you can't get in. Go west and you will see a wooden bridge. Before crossing it, make sure that you are 0kg or less. Then, cross the bridge, and go through the door.

5. Take the lever, and leave the temple. Go to the bank. You will need these items:

Weapon (not required, but can be useful against Ice Spiders (level 61)

6. Go back to the temple, and in the room you entered there is a Lever Bracket on the southern wall. Use the Lever you picked up earlier in the quest on the Lever Bracket, and pull the lever. You will unlock the southern gate. Go past the level 61 spiders, and search the chests to find Ice Arrows. You should have around 20-30 arrows, depending on your ranged level. Note; with 70 Range with a range bonus of +126, it took 17 ice arrows to kill the Fire Warrior for one of our members.

7. Leave the temple again. You now need these items:

8. Go back to the temple, and go through the gate leading to the skeletons (level 45), and continue to the north until you see a lever. Before pulling the lever, search for the traps on it. When the traps are disabled, pull the lever. Then, go west and go through the door. Before continuing, be prepared for the combat (Equip your bow and arrows).

9. In the room you are in, there is also another door. When you are ready for fight, open the door on the other side. The Fire Warrior of Lesarkus will appear and attack you. If you can, turn on Protect from Magic when killing him. When you're done, go through the door.

10. Talk to Winelda, who will teleport you to the other side of the river of lava. Pay her the 20 limpwurt root to get over. Follow the path all the way to the end, past the Lesser Demons, where there is a Shiny Key on the ground. Pick it up. Go back, and push the wall in the north.

You have two choices. Either, you can go to Lucien's side (bad), or the Guardians' side (good).

Lucien's Side:
11a. Take the Staff of Armadyl and kill the guardians.

12a. Leave the room, and climb up the ladder to the west. Use the key on the door to get out, you are now just north of McGrubbor's Wood. Go to Varrock. Go north of the city on the way leading to the Wilderness. Just before the Wilderness, go to the west, follow the castle wall, then go south until you see a house [map]. Enter it, and give the staff to Lucien to complete the quest.

The Guardians' side
11b. Take off your Pendant of Lucien. Then, talk to the guardians. Tell them that you are working for Lucien. They won't like it, and they will give you a Pendant of Armadyl, which allows you to kill him.

12b. Leave the room, and climb up the ladder to the west. Use the key on the door to get out, you are now just north of McGrubbor's Wood. Go to Varrock. Go north of the city on the way leading to the Wilderness. Just before the Wilderness, go to the west, follow the castle wall, then go south until you see a house [map]. Enter it, and kill Lucien to complete the quest. 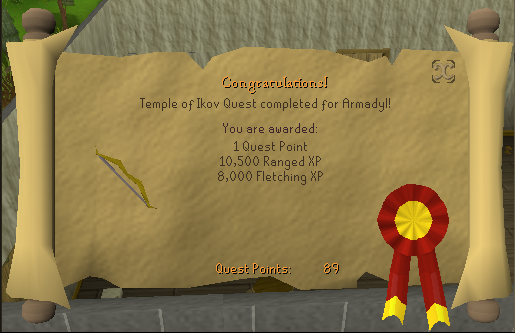