Denulth, head of the Army, located in Burthorpe.

1. Ask Denulth "How goes your fight with the trolls?". Then ask him if you can help him. Lastly, tell him that you will help.

2. Go toward the trolls area, but when you see a path going south, follow it. Buy some climbing boots from Tenzing if you don't have any. Now, follow the path toward the north.

3. You'll see some rocks that you can climb. Climb them. Now, head east. There will be lots of rocks to climb. When you come to the gate, go through it. You will then have to fight Dad, which is in combat level 101. 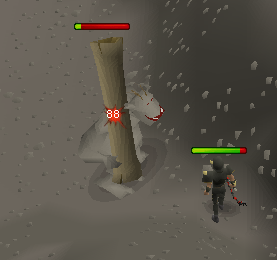 5. When you've entered the stronghold, go south, then throgh a wooden door to the west. Here, you will see some Troll Generals (level 113). Kill one of them, and pick up the Prison Key it will drop. 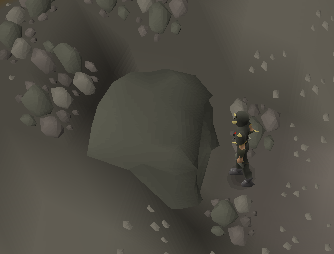 6. Now, go out the wooden door again, and walk to the north. Now, go down the stairs. Again, you some stairs leading down to another floor, which is behind the prison door. Go down these stairs.

7. Go south, and you will see a prison, with two trolls guarding two cells, where there are two men. Pickpocket both of the trolls, and open the two cell doors. Note that if you fail to pickpocket, the troll will wake up and attack you, so be ready. If you don't have a theiving level of 30 or above you can kill both trolls to get the keys to unlock the cells.

8. Head south, and go throgh the exit. Now, go southeast, and you will come back to the secret way leading to Tenzing's Hut. Go back to Denulth to claim your reward. He will tell you to see Dunstan, which is located north-east of Burthorpe (the city you're in now). He will give you a family heirloom: Two experience lamps. 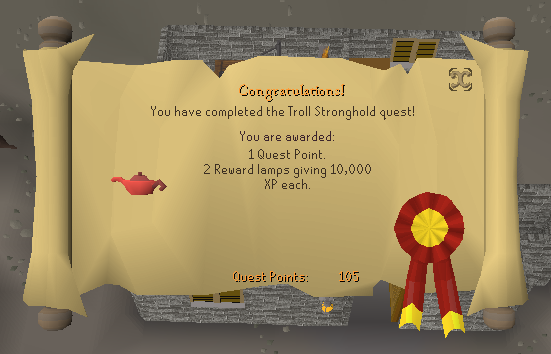 The reward for the quest used to be the formerly rare and sought-after Law Talisman. The reward was changed to be two experience lamps and the talisman is now available for trade and can be dropped by monsters. Players that completed the quest prior to this change can visit Dunstan, the Burthorpe blacksmith that originally gave you the talisman, to claim the two lamps.