Watchtower Wizard in the Watchtower north of Yanille [map].

1. Head to the Watchtower just north of Yanille [map]. The guards won't let you climb the ladder, so you'll need to find another way in. Go outside, and on the northern wall, there is a trellis you can climb. 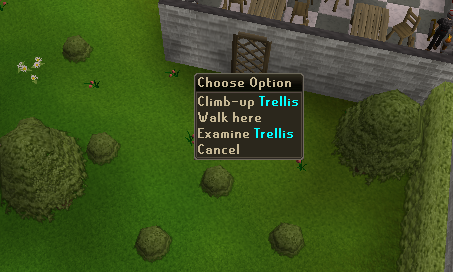 Then, go to the top floor, and speak to the Watchtower Wizard to start the quest. 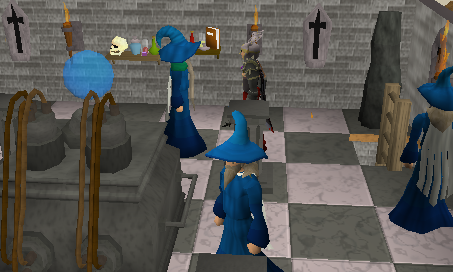 2. Go out of the watchtower, and search the bushes around for these items: 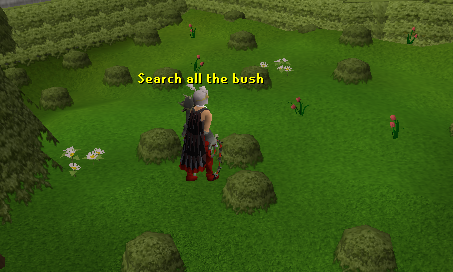 Head back to the wizard. Note that you can now use the ladder. The wizard will now send you to find the crystals. You will have to talk to some local ogres to learn the way to the Ogre city.

3. Go downstairs, and pick up the Lit Candle, as you will need it later. 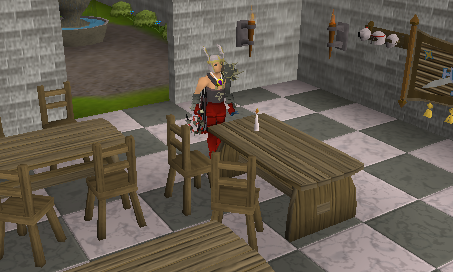 If you don't have bat bones, go to the dungeon just east of the Watch tower (you'll need a weapon with the Slash attack style to cut through the web) [map] and kill a bat to get some Bat Bones. 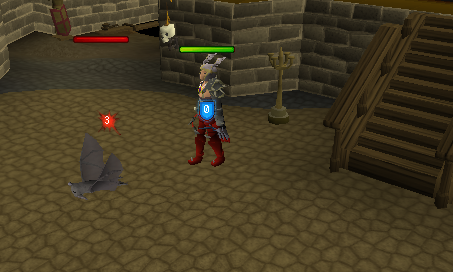 4. Og is the first ogre you need to talk to. He is found just west of the Watch tower [map]. You'll need to go through Yanille to get there, but you can, if your agility level is high enough, go through the hole just north of the farming patch.
When you find Og, tell him that you seek the entrance to the Ogre City. He will tell you that he'll help you if you give the Gold Bar that was stolen by Toban. 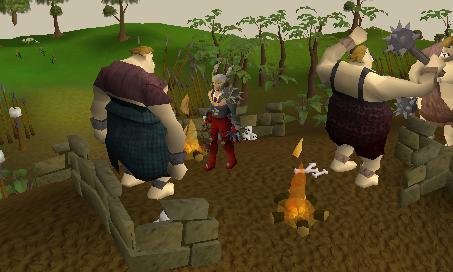 5. Now, head a little south until you find a tree with an unusual long branch on it [map]. You will need to get to the island, so use the rope on the branch to swing over the water. 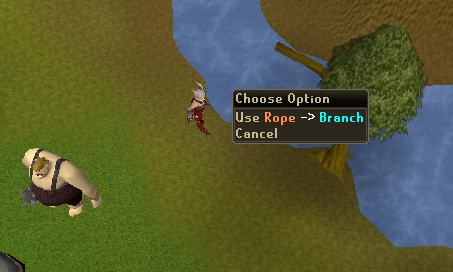 When you're on the island, find Grew and talk to him. He wants you to kill his enemy, Gorad, and you'll have to bring him a tooth from Gorad as a proof. After talking with him, pick up some Jangerberries. Find the swinging rope on the island, and swing it. 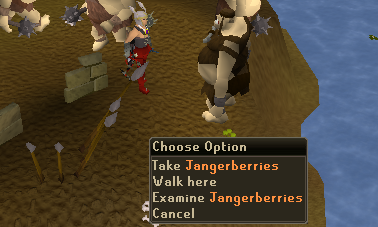 6. Toban and Gorad are found on a island west of Gu'Tanoth (The Ogre City) [map]. However, you won't be able to access the island since the bridge leading to it is broken. So, you'll need to go to the dungeon south-east of Gu'Tanoth [map], and follow it until you reach the island. 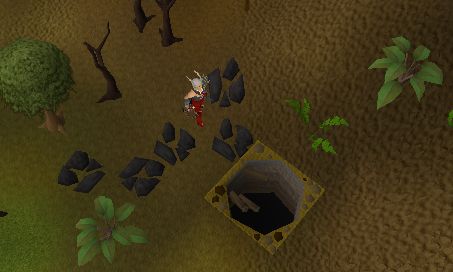 7. Once you're on the island, find and kill Gorad (level 68) to get his tooth. Then, find Toban and talk to him. He will ask you for some Dragon Bones. Give them to him, and he will give you the first part of the Ogre Relic. Now, open the Toban's Chest and take the Gold. 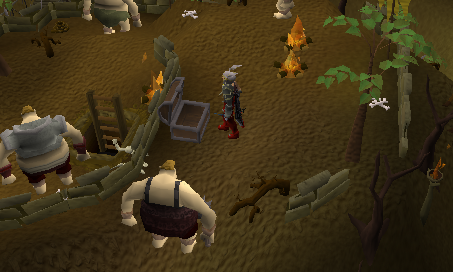 8. Head back to Grew on his island west of Yanille, use your second rope on the Branch on the Long-Branched Tree, and give him Gorad's tooth. He will then give you the second part of the Ogre Relic.

9. Head to Og [map], and give him the Gold Bar. He will give you the third (and last) piece of the Ogre Statue. You will also have the first crystal now.

10. Go to the Watchtower Wizard, and use one of the Ogre Relic parts on him, and he'll put it together for you.

Items Needed for steps 11-20: Ogre Relic, food/armour/weapon, 20gp, 1 Death Rune, Lit Candle, Gold Bar, Anti-Dragon Shield. You will have to survive level 111 dragons.
11. Go south-west of Yanille [map] and you should see some guards. Use the Ogre Relic on one of the guards, and you will be able to pass. 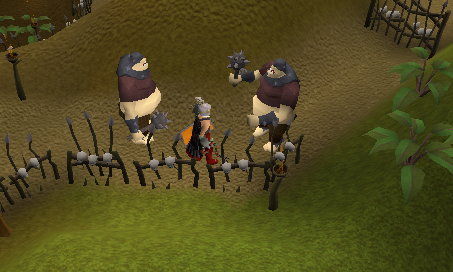 12. South-west of the market place, there is a Rock Cake Stall [map]. Steal a Rock Cake. Remember to not eat it, as it will cause damage to you! 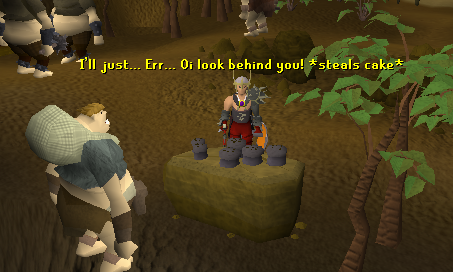 14. Follow the path until you reach a broken Bridge with some rocks. Click the rock to jump over, but another ogre will stop you and tell you to pay him 20gp. Give him the money and jump over.

15. You will now see more guards. Talk to any of them, ask them about the passage to the Skavid Caves, and he will give you a riddle to solve. Use the death rune on the guard (The answer of the riddle is death rune) to solve it. The guard will give you a Skavid Map. 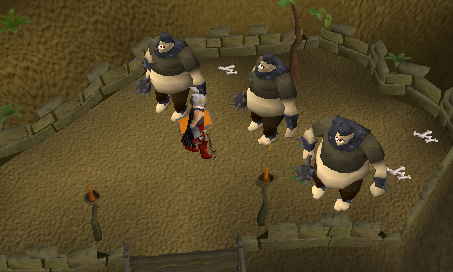 16. Now, go out of the city. Enter each of the caves until you find a Scared Skavid. It will try to teach you their language. 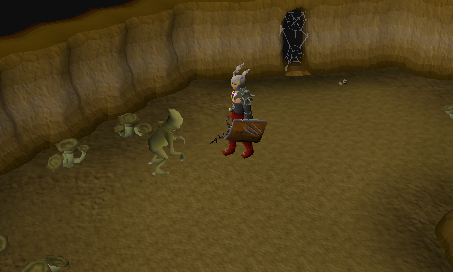 17. Exit the cave and go to the other caves and talk to the skavids there. You will have to give them the right response or the conversation will end:

When you have given the right response to all the skavids, go back to the Scared Skavid again and speak to it. It will tell you to see their mad kinsmen.

18. Follow the path that leads to the South-east (the opposite of the one that leads to Gu'Tanoth), and go to the gate (. Talk to one of the guards, and he will ask for a Gold Bar. Use your Gold Bar on one of the guards, and you'll be allowed to pass the gate. Follow the path, cross the bridge, and enter the cave. Talk to the Mad Skavid, and give him the right response. He will now give you the second crystal! 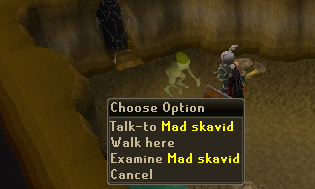 Before you leave, pick up some Nightshades from the ground (these are VERY dangerous - if you eat them, you will lose lots of life points AND be poisoned!). You'll need at least 2, but you should take more. 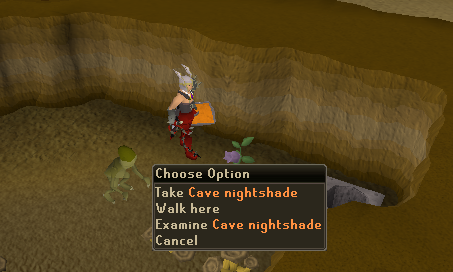 19. Head back to the market place, and use (don't eat!!) the nightshade on a guard next to the cave entrance west of the market place. Enter the cave. You should have the Anti-Dragon shield when entering it, and some food.

20. There are several Ogre Shamans in this cave. Do not attack anything, just go north until you reach the exit.

Then, head to the Watchtower Wizard. He will tell you about a potion that can kill the Ogre Shamans.

21. You will now have to make the potion to kill the Ogre Shamans:

If you still are in the bank, you can deposit your Pestle and Mortar.

22. Bring the potion you made to the Watchtower Wizard, and have the potion enchanted.

23. Go to the ogre market, use the nightshade on a guard, and enter it.

24. When you're inside, use the potion on the Ogre Shamans to kill them. The last Shaman will drop the third Crystal. 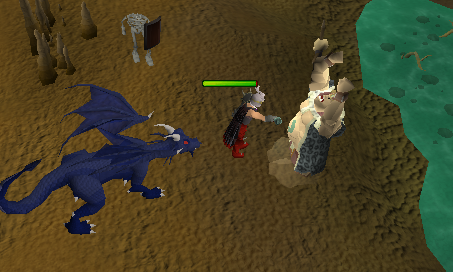 25. This is the easiest crystal. Just go to the center of the cave, and mine the Rock of Dalgroth, and you will get the fourth (and final) crystal. 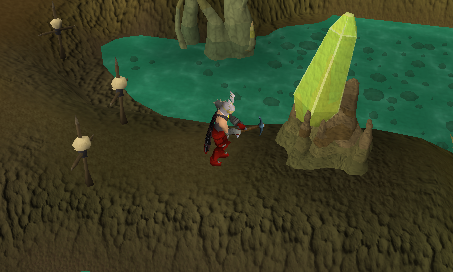 26. Head back to the Watchtower Wizard, give him the four Crystals, and pull the lever. Congratulations, you've now completed the Watch Tower Quest! 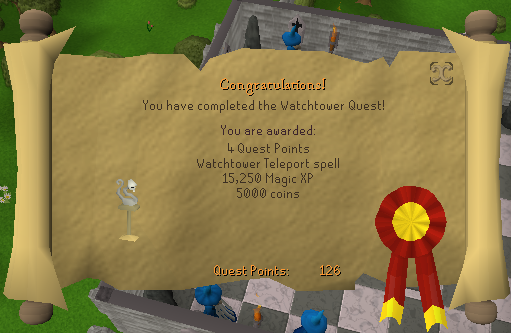