What Lies Below Quest Guide

1. Start the quest by talking to Rat Burgiss south of Varrock, on the road leading to Lumbridge. Ask him if you can get his valuable papers back. He tells you to kill the outlaws that stole his papers and get 5 of his papers back. You also get An empty folder to store the paper in.

2. Head to the Outlaws camp which is located northwest of Varrock, east of Edgeville. [map] Kill 5 Outlaws and pick up Rat's papers. Use all 5 papers with the folder.

3. Go back to Rat Burgiss with the folder. He then gives you a letter that he wants you to bring to Surok Magis in the library in Varrock Castle.

4. Go to the library in Varrock Castle and bring the letter to Surok Magis. [map] He tells you that he can make clay into gold bars. He needs a Bowl and wand incasted with the power of chaos. He gives you a regular wand and a diary.

5. You need to go to the Chaos Altar. There are now three ways to do it:

6. Go to the bottom level of the maze, and use the wand on the altar to infuse the wand with chaos runes.

7. Go back to Surok Magis in the library with the infused wand. He says that he needs some time to prepare the spell, and gives you a letter that you have to bring to Rat Burgiss.

8. Bring Surok's letter to Rat, who reveals that he is the Commander of the Varrock Palace Secret Guard, and tells you that Surok had discovered a spell to control the king's mind. He then tells you that Zaff has a counterspell, and you have to speak to him and he will tell you what to do.

9. Go to Zaff, who runs the staff shop just north-west of Varrock square. Tell him that Rat Burgiss sent you. He says that you have to fight the king until he's very weak so the counterspell can be cast. He gives you a Beacon ring that you need to operate when the king is almost dead. He also gives you some instructions for the ring.

10. Now, go back to Surok Magis and tell him that he is under arrest. Obviously, he won't accept, and asks you if you're ready for a fight to death. Tell him to bring it on, and he summons the king who is already under his control.

11. Fight the king, and when he is almost dead, a message telling you that it's time to summon Zaff will appear. Operate the ring, and Zaff will be summoned and cast the spell on the king, then teleporting him away. Surok attempts to teleport away, but Zaff stops him and places a magic block on the room.

12. Return to Rat Burgiss who will reward you. 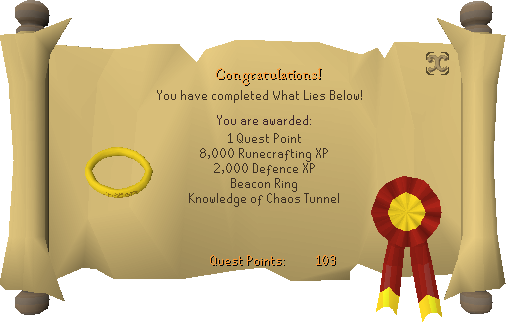 After the quest has been completed, you can use a new shortcut to the Chaos Altar. See step 5 for more information about this shortcut.