Speak to one of the three Tzhaar outside the collapsed tunnel to the east of the Tzhaar entrance from the Karamja volcano.

1. To begin, talk to one of the three TzHaar standing next to the collapsed tunnel on the north east end of the TzHaar area under Karamja volcano. They'll tell you that a creature has been digging under the TzHaar city and has made the ground unstable. There's an opening that someone could go through to make the tunnels stable so that they can fill them with rocks. However, it's too small for one of the TzHaar to fit, but a human might be able to. Offer to help them and they'll tell you to speak to TzHaar-Ket-Grol. TzHaar-Ket-Grol is just south of the quest start.

2. TzHaar-Ket-Grol will tell you that he won't let you into the tunnels without some items that you'll need. He'll give you a list, written in the TzHaar language, of items to get. To translate the items, go to the library in the western part of the TzHaar city. 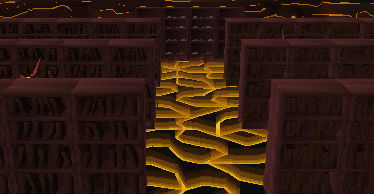 3. The tunnel to reach the library is just southwest of the lava forge. Talk to TzHaar-Mej-Lor when you get there. Ask him for help with the TzHaar language and he'll point you to the back of the library, where there are two book cases with ashes on them. It becomes clear that the books that were sent got burned, and that you need to find who wrote them. TzHaar-Mej-Lor says that they got them from the library in Varrock.

4. Teleport or walk to Varrock and talk to Reldo. Ask him about the books and Reldo will tell you that he has another copy of the book you need in his library. Search this bookcase for the book: 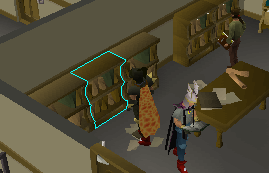 5. Look through the book to translate the items needed on the tablet. The answers to it are:

(The amount varies per player, but you still only need 14 planks and 18 blocks)

6. Go back to TzHaar-Xil-Grol and tell him the answers. Next, go to the mines to the east of Grol. Talk to TzHarr-Hur-Brekt about magma mining, but he won't teach you. Try to bribe him, and he will say that he won't take your money. However, he will help if you can help him get the other miners to be in a play written by Brekt. Tell the miners about the plot for the play, and they'll say they hate it. You'll need to make some changes to the plot to make them all agree to be in it.

8. Finally, talk to TzHaar-Hur-Brekt again about finishing the plot. The best ending is that the criminal's actions keep getting foiled. However, TzHaar-Xil-Mor doesn't like this too much. Talk to him and suggest that the actions maybe could haven been stopped only some of the time. Once you do this, the story will be done and you will have to assign the roles of the play.

9. After asking TzHaar-Hur-Brekt about the roles, go and assign them to the miners.

10. Once you have all of the roles assigned, TzHaar-Hur-Brekt will teach you how to mine the magma off of the walls in the room. Mine the amount of stone on the list and use a chisel or hammer (with both in your inventory) on all of them to get a support pillar. 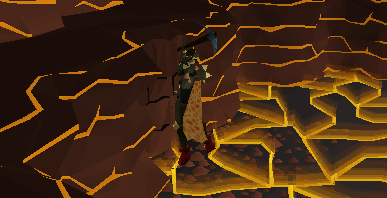 11. Next, go to the bank and withdraw runes for a few dozen water spells, magic boosting armor, half of the rest of your inventory full of oak planks, and the rest full of pillars. (if you want, you can take a beast of burden to hold the runes, arrows, etc. note that you cannot hold the planks and pillars on it) Go back to the quest start point and use an oak plank with TzHaar-Hur-Frok to get the planks treated. Once you have the pillars and treated planks, talk to TzHaar-Ket-Grol again and ask him about how to repair the tunnel. Remember this when repairing them:

12. Go through the crack in the wall next to TzHaar-Ket-Grol. Push the boulder in front of you and start repairing the tunnel. To do this, examine the caved-in walls and read the description of the damage. Use the correct item on it to repair it. Be careful not to trap yourself in, or you'll have to push over a pillar and have to make a new one. Once you're finished, mine the collapsed tunnel and go to the next room. 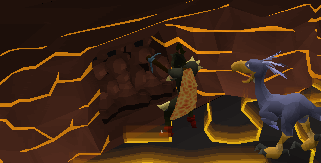 13. The fire monster on the other side of the lava will attack you with magic attacks, so you'll have to kill it before you do anything. It isn't harmed by ranged attacks, so you'll have to use magic ones. After its been dealt with, proceed to repair everything in this area. If you run out of supplies, then go back to the bank and withdraw more. Remember to treat your oak planks at TzHaar-Hur-Frok.

14. You'll need both magic and ranged attacks for the third room. Get a bow, ammunition, runes, and magic boosting armor. A lava beast and a fire monster will attack you if you go into the large, open area near you.If you have low defense, protect from range and hit the fire monster first with magic. After that, shoot the lava beast with arrows. Go into the eastern part of the third room. Don't start setting up pillars, or you'll trap yourself. Kill the lava beast in that area with ranged. After that, go as far as you can, to a spot where there is a large pool of lava blocking your path. Here is the lava pool: 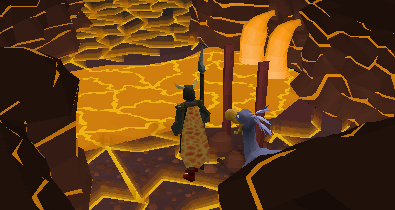 15. After that, start setting up pillars as you make your way back west. Remember to hit any side areas along the way. Go across the lava and go to the next area, where you'll find a few TzHaar-Hur's. Talk to one of them and ask about the creature, and they'll say that it is to the north of the area.

16. Before you go fight the TokTz-Ket-Dill, mine the collapsed tunnel on the south end of the area you are in. Go back to the bank and get food, a rune pickaxe, a crushing weapon (rune pick will do), and armor. If you can, then it is recommended that you summon a minotaur, as they are very good against the boss. Once you have everything, go to the mining spot and walk into the northern cave.

Once it's dead, go back and talk to one of the three TzHaar at the quest start point and collect your reward. 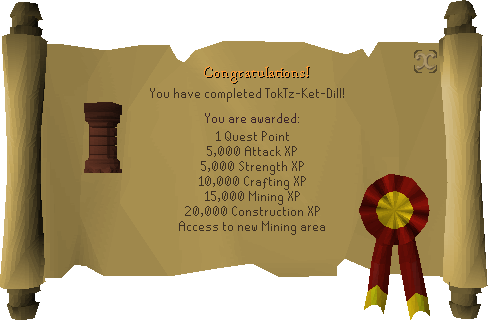 You can use the fairy rings to get to the TzHaar area quickly. The combination is BLP.