Introduction – What is Essence Running?


General Overview of the Process

If you have no idea what was said in the Intro, then read this section will, hopefully, clarify the process of Essence Running. Basically:

This Guide will cover the two popular types of Essence Running - "Law Running" and "Air Running".

Law Running, as can be guessed from the name, involves Law runes. The start point is from Draynor Village and it ends up on Entrana, at the Law Altar. Law Running takes place on world 66.
Draynor/Port Sarim Map 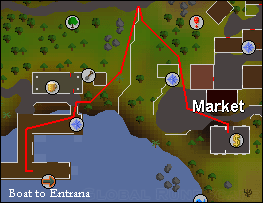 From the Draynor Village Bank, walk through the market and north to the part where the wall has an opening (where the road is). Go through and head south to the Port Sarim docks. The monks are on the docks, just south of where the Pirate's Treasure quest starts. 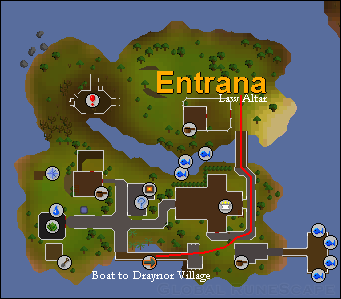 Walk east of where the Entrana docks are; there is an opening onto a small path. Walk through there and follow the path north until you get to the altar.

Another, simpler, way of finding your way there is just to follow the big train of people going to and from Entrana. This is also an effective method for finding the location of holiday events. ;)

If you're going to craft Law Runes, you will need 54 Rune Crafting to do so. You will also have to have done the Troll Stronghold quest. Here's a list of items you need to bring for crafting. Trade with the people outside or inside the altar. When you're outside, shout something like "(name here) open" or something of the sort. Open = Open for Runners to trade.

Running the essence takes less work than crafting. Just follow the map back and forth, and trade with the people who shout something like "(name) open". Here's what to bring if you're running.

The trade between the crafter and the runner is a pretty simple one. 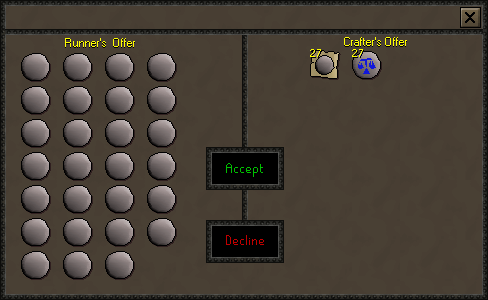 The other popular form of Essence Running is Air running, which takes place in world 16. Again, the runes involved can be guessed from the name - Air runes. Air running is a little bit different from Law Running. Law Running returns Law Runes to the runner, whereas Air Running returns money, usually 1,500-2,000 gp (gold pieces). Hopefully everyone knows where the Air Altar is, but here's a map anyways. 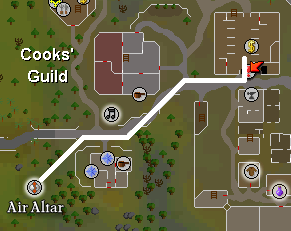 From the Varrock West Bank, follow the path south. The Altar is south-west of Varrock and just before Barbarian Village, so don't travel too far.

No, you don't need 1 Runecrafting to do this. You will need at least 44 Rune Crafting to craft 5 Air Runes per Rune Essence or else it won't be worth it. This is the stuff that you want to bring for crafting. Same as law running - sit inside the altar area and shout something like "(name) open 2k". The 2k signifies that you're offering 2k gp per trade.

This is an excellent way to make money as a low level. All you need to do this is an Air Talisman (tiara recommended) and 25 Rune Essence. Trade with the people who say they are "open". You can tell how much money they're offering per trade by what they say. If they say something like "open 1k", then they're offering 1k per trade. 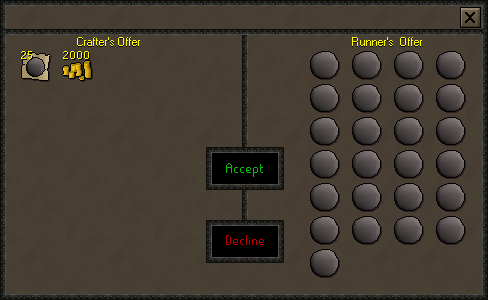 Q: I'm trying to trade with the Crafters, but it's taking so long to get one of them to trade with me!
A: Well, have you ever tried crafting? Whenever you make the slightest hint that you're open, you get flooded with trades.

Q: It costs so much to craft Air Runes, why do it?
A: No it doesn't. As long as you can craft around 5 runes per essence and sell the runes you make, it comes out to be not that much gold spent. Guide credits
Written by: Syntax Error
Last update: 29-Dec-2010 10:52 by Rebel007