Death to the Dorgeshuun Quest Guide

Mistag in the Dorgeshuun Mines

1. To start the quest, go and talk to Mistag is the Dorgeshuun Mines. He will say that the Dorgeshuun Council would like to ask a favour of you. Ask him what this favour is, and he will tell you that he wants you to act as a guide for an agent they will be sending to the surface to spy on H.A.M.

2. Now ask Mistag to show you the way out, and talk to Zanik in the cellar. Give her a H.A.M. set, and she will start following you wherever you go.

3. Go out of the lumbridge castle and sit back and watch the cutscene.

4. Back in the castle, talk to the Duke.

5. Now go out to the castle again, and talk to any man or a woman, then to Father Aereck in the church just east of the castle.

6. Go over the bridge to the east, and Zanik will try to talk with the goblins, but as you might have expected, it doesn't go well.

7. After that, take her to the general store. Talk to either the shop assistant or the shop keeper.

8. Ask Zanik about the mark on her forehead, and you will get another cutscene. Time to spy oh H.A.M.

9. Head to the H.A.M. base which is located underneath the trap door just west of the castle. In the base, talk to any H.A.M. member,

Ask him what he is planning to do with the cave goblins. Then go out of the room and Zanik will spot a hidden trapdoor. Pick-lock it and go in.

10. If you try to go further in to the dungeon, the guard will try to stop you. Ignore him and keep going north, and Zanik will shoot him.

11. Go into the crack in the wall, then pick-lock the door. Walk one step north, and talk the the guard who is right next to the door you just pick-locked.

12. You will need to tell Zanik when to shoot. Choose 'Now!' when the guard walks away.

13. Walk east of the path which the guard was patrolling, and tell Zanik to wait there. Go to the path where the first guard was and get found out by the guard that's guarding the door to the north-eastern room. Zanik will shoot him in the back when he's coming after you.

14. You need to approach the guard from two different directions to shoot him. Make her wait at either at the north end of the eastern or the western path, and you can walk to the guard from the path opposite of the one she's waithing at.

15. Go listen through the door.

A guard will catch you just as Zanik was about to tell you what the H.A.M. are planning.

16. You will wake up at the jail. Do not go out just now. Instead, talk to Jimmy the Chisel, and pick-lock the prison door and get out of the H.A.M. base via the ladder. You will find Zanik on the floor.

Inspect her and your character will pick her up.

17. Get to Juna through the Lumbridge caves and talk to her. Even though you won't need a spiny helmet if you go through the shortcut through the cellar in Lumbridge castle, it's always a good idea to take it in case you get lost.

18. After talking to Juna, tell her that you're ready and she'll let you go past her to collect the tears of Guthix. Remember only to get the blue tears. After collecting 20, there will be a cutscene, with Zanik telling you what she heard at the H.A.M. base.

19. Now head to the watermill. To get to the watermill, cross the river east of the castle and walk north until you find a farmhouse on the eastern side. Go into the first door on your left, then search the crates (Make sure you have both your hands free before you do this). Zanik will ask you if you're thinking what she's thinking. Ask her what it is, and she'll say that she could get down the trapdoor by hiding inside the crate. Tell her that this is a good idea and then take her in the box down the trapdoor.

20. Once you're down, keep walking west until you find sigmund with some guards. When you try to get near them, they will attack you. It's a good idea to kill the guards first, then take care of Sigmund. He won't be so hard with Zanik helping you.

21. Go smash the drilling machine. It'll fall into pieces. Head west, and you will reach the goblin mines. Talk to Mistag to finish off the quest. 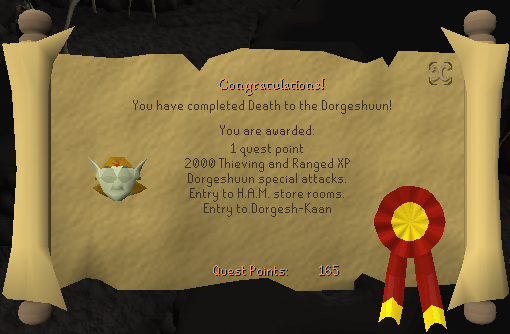