If you want to teleport during the quest, bring teleport runes for Camelot and Falador.

Recommended
However, level 45 Magic for Falador and Camelot Teleport, and level 20 Agility for log bridge shortcut is an advantage.

None!
Recommended
Teleport runes to Camelot and Falador.

1. Talk to Captain Lawgof in the Coal Trucks, west of McGrubors' Wood (west of Seer's Village).

He will ask you to help him fix the fence to keep the goblins out and protect the mines. When you agree, he will give you 6 railings and a hammer to fix the fence. Now, inspect each section of the fencing. When you find a broken one, repair it. It is possible to fail to fix it, and you lose 50 life points, but this is rare.

After you've fixed the fence, talk to Captain Lawgof.

2. Now, he tells you that his tower has stopped communicating with him, so you'll need to check out the guard there (map). Walk south of the base to the tower, climb to the top of the tower and pick up the dwarf remains.

Take them back to the Captain Lawgof.

3. He will then ask you to look for his son. Go to the fishing guild, and just east of the entrance, there is a cave. Enter the cave and go northwest.

In the norhtwest room, there are lots of crates.

Search them until you find the dwarf child (Lollk).

He'll go home, and you can now leave the pile (Go to the entrance, and climb over the Mud Pile).

4. Head back to Captain Lawgof. He will need you to fix the Dwarf Cannon. He will give you a toolkit, which can be used to fix the cannon. Inspect the cannon just west of him.

After inspecting the cannon, use the toolkit with it. Note that you can fail, so you may need to try to fix it twice or more. Once you've fixed the cannon, talk to the Captain Lawgof again.

5. The Captain wants you to find out what the cannon shoots. Teleport to Falador and head to the Dwarven Mines (map). Find and talk to Nulodion.

He will give you an Ammo Mould and some notes. Teleport to Camelot and head back to Captain Lawgof to finish the quest. 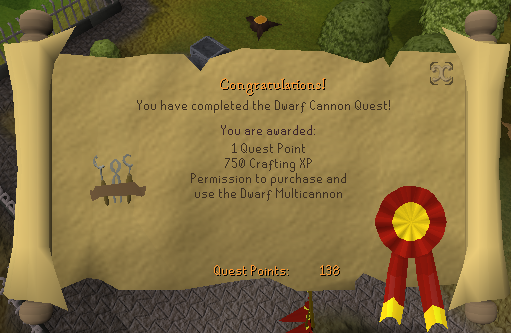