The Eyes of Glouphrie Quest Guide

West side of the Gnome Stronghold, in Brimstails cave

Talk to Brimstail, and ask "Is that your pet?" and he will tell you it's a strange unknown pet and it's called Izzie, he will now start to talk about his research. He will then ask if you want to hear some history, once he has finished talking he will ask you to move onto the next cave, so move on.

Once in the next cave you will see Oaknock's machine.

Now after looking and investigating things in the other room return to Brimstail and tell him that you've had a look in the other room. Brimstail will ask you to visit Hazelmere and ask him about Oaknock. Hazelmere can be found east of Yannile, along the path, past the green spiders and up the ladder.

Hazelmere will start by speaking jibberish, "Blah, blah, blah, Brimstail", after a small while of you talking to him he will evantually speak english by reading your mind, he tells you of the story of the battle and how Glouphrie became untrusted. 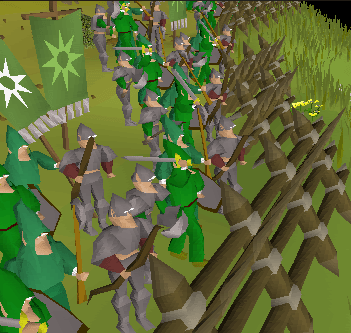 He will now give you a token, head back to Brimstail's cave.

He will tell you that the machine must be fixed, now go over to the machine and click repair to find out what need's fixing, you will be told you need to get:

Firstly go back and speak to Brimstail and ask more about fixing it. He will explain a bit more about making the glue. He will tell you about runes, you need a mud rune, you can collect the sap by using a knife on a evergreen tree, evergreen tree's can be found all over RuneScape, now use your pestle and mortar with your mud rune to grind it into dust, now use the dust with the bucket of sap and you have magic glue. Now bring your hammer, saw, oak and maple log, and magic glue back to Brimstail's cave.

Now repair the machine and return back to Brimstail, you will be given two more discs.

Now return to the machine and use "Unlock". Firstly, put your yellow triangle disc in and press the green button, now choose "Unlock" again now this time, return back to Brimstail and he will give you 3 more discs, go back to the machine again go to the side and look at the machine panel, the numbers you are going to get is totally random so here's a short explanation.

The chart above shows each colour's value:

This value of the colour is multiplied by the amount of sides the shape has to get overall value.

As for the exchanger, it gives out the value of what you have put in.

Once you have unlocked the machine, you will see Brimstail's pet turn into an Evil Creature, go back and speak with Brimstail, he will tell you that the Evil Creature's are spies. You must kill them all, start by killing the one in Brimstail's cave.

Now once you have killed all six creatures go to King Narnode at the bottom of the Grand Tree and tell him about the creatures. 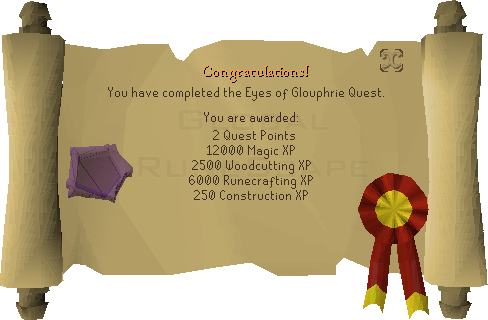 Note: Go back to Brimstail's cave, and walk across the newly found crystal bridge across to the bowl and use your crystal with it to gain a crystal saw, the crystal saw gives +3 construction.