Speak to the Odd Old Man near his shack between Varrock and Paterdomus.

The Odd Old Man is again in need of a hand, but this time it’s not all going to be about bones. Apparently, he has new needs that will require adventurers to seek the hides, pelts and skins of creatures commonly found in the Fremennik Province.
Players will be able to allow the Odd Old Man to take his plan fur-ther. More experienced players will then be able to help him the rest of the way, getting extra rewards and uncovering the truth behind one of RuneScape’s most guarded secrets – just what is in that mumbling bonesack? 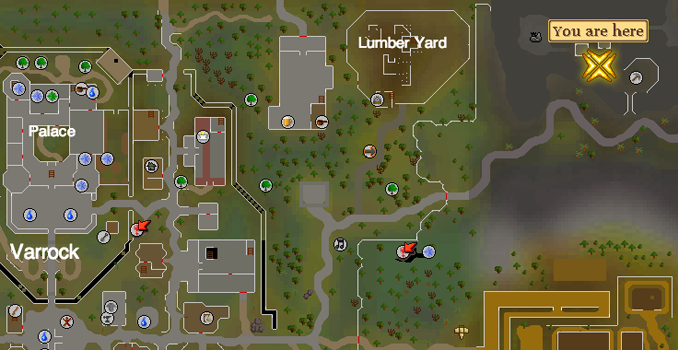 He is located directly East of Varrock’s Lumber Yard. Since your last encounter with him, he has been contacted by the Varrock Museum to gather the stuffed animals for their display on the Fremennik Province. Being the Odd Old Man that he is he has accepted the request, but realized that his age might be a factor in collecting these special hides. Since you have helped him before he figures you might be able to help him again.


The Varrock Museum has requested these nine animals to be put on dispaly:

Make your way to the Fremennik Province, some prefer to use the Fairy Rings (Code: AJR), but you can also walk North from Camelot or if you have a player owned house there you can teleport directly.
Once you are in the right area, you will have to search out and kill all nine of the animals on your list.

Here is a map of the regions in which each animal lives: 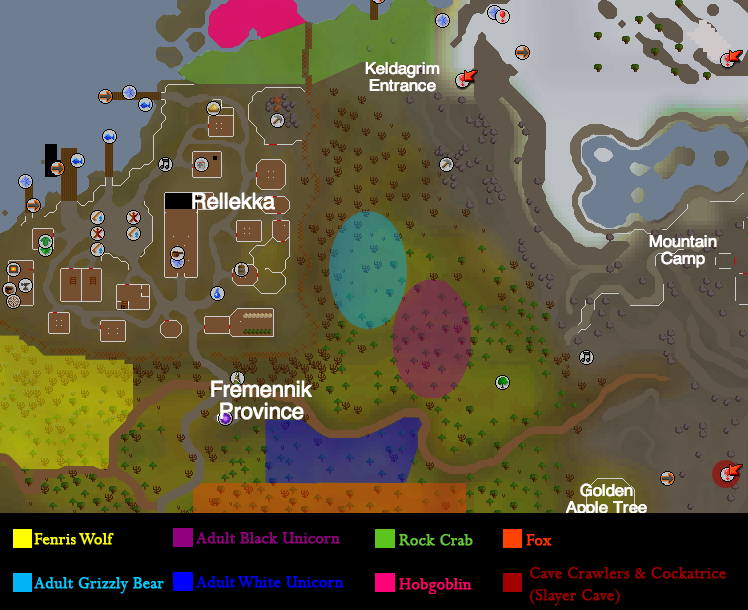 When you go into the Slayer Cave at the bottom right of the map, make sure you wear your Mirror shield when fighting the Cockatrice. Every other one of the creatures on the list is easily killed by normal means. After you have gotten all nine hides you can teleport to the bank of your choice, but since you will need to return the Odd Old Man, a Varrock Teleport is advised.

Return to where you began the quest and using the 9 Bag of salt on the hides, you will transform them into Scrubbed Hides: 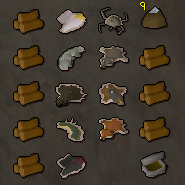 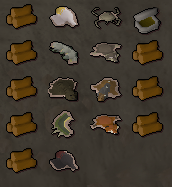 Just to the North of the Odd Old Man, there is a fire pit and a rack of ribs next to it. 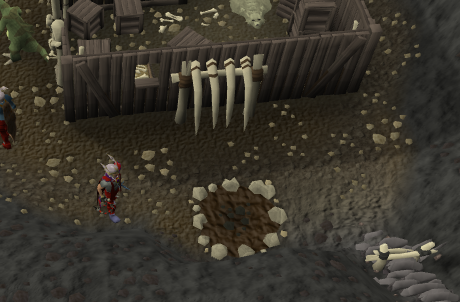 You will use this rack to dry the hides without damaging the fur. To set the drying process into motion, you will need to place a log in the fire pit, stretch each hide over the rack, and light the fire. It does not take long for each hide to dry, just until the fire dies out, but you will not be able to place the Scrubbed Rock Crab Hide onto this rack because it would only damage it.


After drying each hide you should be left with:

You are now ready to talk to the Odd Old Man again.


You will need to have all eight of the tanned hides and the Scrubbed Rock Crab Hide in your inventory. Talk to him and you will discuss your problem with the Rock Crab Hide and find out that the Odd Old Man and his sack of bones were just playing a trick on you.

Give him the rest of the hides and he will thank you greatly and give you your reward. 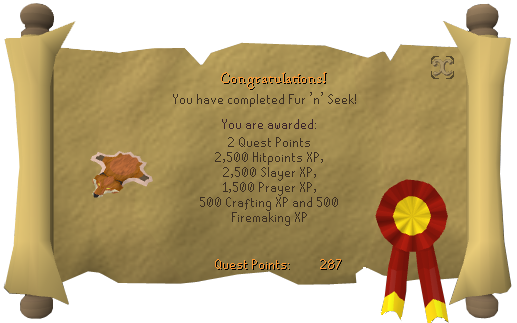 You may have finished the quest, but as is usual with your dealings with the Odd Old Man when you did the Rag and Bone Man, there is also a subquest in which you are asked to find more bones for him for a further reward. 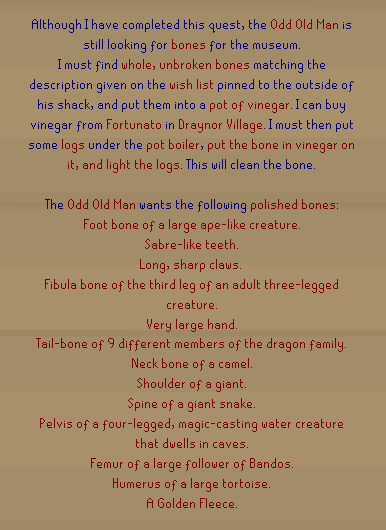 Level 320 but he will degrade throughout the battle

After the first kill for the subquest, the rewards for killing the Skeletal Horror are:

Again, this can be done only ONCE per week