Keldagrim east of Rellekka and north of the mountain camp. Follow the dwarven statues to the underground river.

1. To start the quest, talk to the Dwarven Boatman just inside the entrance to Keldagrim. Agree to let him take you to Keldagrim. A cutscene will follow, showing the boat crashing into a statue of the ancient King Alvis. You will then be arrested.

2. You will be taken to Commander Veldaban, who asks you to see the local sculptor to help him build a new statue. Tell him that you'll do it.

3. Blasidar the sculptor is located in Eastern Keldagrim, across the river, south of the Kebab shop. Tell him that you'll help him, and he'll ask you to find clothes and boots that match the design of the original statue of King Alvis. You'll also be asked to find his battleaxe.

Boots that can pass off as King Alvis' boots

4. Go back to the Western part of Keldagrim, and go to the Shield shop southwest of the bank. Ask Saro, the shop owner, about the boots. He'll tell you that he had a pair he sold to Dromund.

5. Go to Dromund's house, which is just north of the bank, and talk to him. He won't let you have the boots, so you'll have to steal them:

6. Talk to Vermundi, who is located south in the marketplace (Eastern Keldagrim). Ask her about the clothes. She'll tell you to speak to Hugi the librarian in West.

7. Go back to West Keldagrim and ask the Librarian about King Alvis' clothes. He'll tell you that there is a book in the library that will help you. Climb the ladder in front of the northwestern bookcase to get the book.

9. Go to the weapons shop, which is in the northwesternmost house in Keldagrim, and ask Santiri about the battleaxe. Tell him that you'll repair the axe, and he'll give you Alvin's battleaxe. Use your 3 sapphires with the axe to repair the hilt.

10. You won't be able to repair the blade yourself, so you need to find a dwarf that can do it. You'll find the dwarf, Thurgo, just north of the Mudskipper point. To get there, either use a fairy ring (if you have completed A Fairy Tale part II, code AIQ) or use cabbage teleport and head south. Remember to bring a redberry pie and an iron bar. Talk to Thurgo. Give him some redberry pie. Then talk to him again and ask about the ancient axe.

When Thurgo gives the axe back, you will be given the option to return to Keldagrim. You should accept. If you choose to not return, you'll have to make your way back on your own (the fairy ring code for Keldagrim is DKS).

11. Once back in Keldagrim, talk to Blasidar the sculptor. He tells you to speak with Rikki the sculptor's model to give him the items. Then, speak with Blasidar again. He'll tell you that the Consortium are going to decide which head is going to be put upon the new statue.

12. There are eight companies in the Consortium, all of them have offices upstairs in the marketplace. You can choose which company you want to join. Talk to the secretary of that company. Ask him if there's anything you can help with. He'll request a certain number of ores within a set amount of time. After you've done all of the secretary's tasks, you will be asked to speak with the director to get more tasks.

14. Head back to Commander Veldaban west of the bank, and talk to him. You will be able to choose to attend the meeting, no matter how long it takes. You'll complete the quest either way, but it's suggested to choose to attend the whole meeting, as there is a very well made custcene. After the cutscene, you will complete the quest. Congratulations! 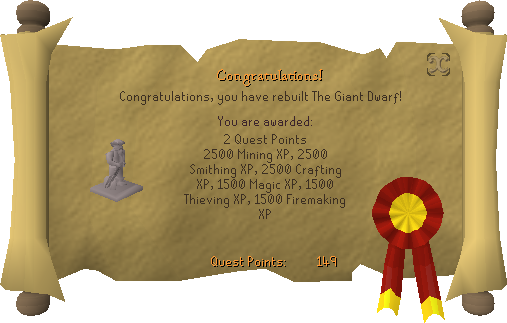