Speak with Larry at the Ardougne Zoo. 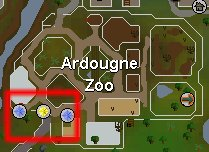 1. To start, head to the southwestern part of the Ardougne Zoo and speak with Larry. You will find out that the other zookeepers put him in a straightjacket after he claimed to have seen a giant penguin surfacing in Witchaven. Agree to help him and head east until you reach the southern coast of Witchaven. You should see some giant footprints, investigate them for the proof you need. Head back to Larry, and after initiating conversation with him, you will be confronted by the zookeeper chief. The chief will agree to let Larry go if you can show him proof. A short cutscene will commence, after which Larry will tell you to meet him on the iceberg from the Cold War quest. 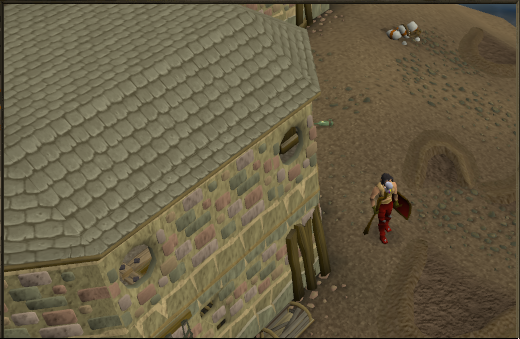 2. Gather ALL of the required items, if you have managed to lose your penguin suit you can make a new one by using a player-owned house crafting table with a plank, a sheet of silk, and a clockwork mechanism in your inventory, make sure you have at least five free inventory spaces and head north to the rock crabs north-east of Relekka (Alternatively, you can use the fairy ring code DKS and head west along the shore) and use the boat that you used in the Cold War quest. Once you reach the iceberg, talk to Larry. He will tell you that you will need to find, board, and sabotage the pengmersible. Get into the penguin suit, head west, and investigate the avalanche to get into the stronghold. 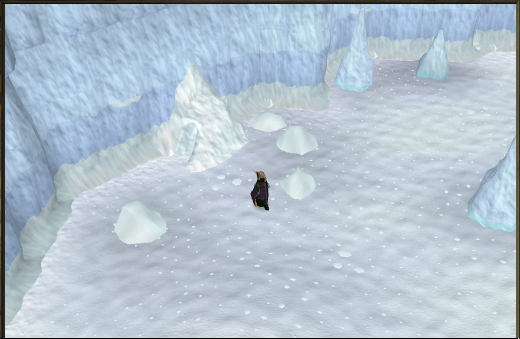 4. If you are wrong too many times, he will get worked into a state and you will have to start over again. If you get them all right, he should break and tell you a combination of three emotes. Write them down. After the interrogation, search the crate in the room to get a shell and some fish hats (make sure you have at least 5 free inventory slots!), you will need them later. 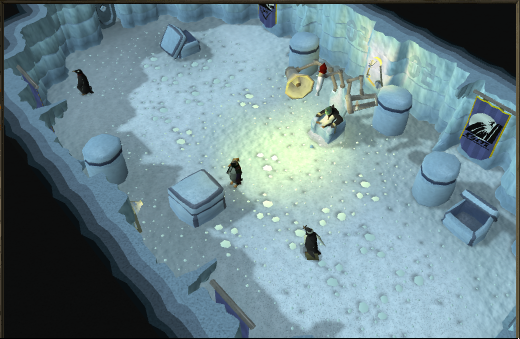 5. Leave the room through the door you came in through and head toward the other end of the hall. Enter the last door to the right and talk to either Ping or Pong. They will tell you that they are writing a song and they need to know some things about the guard. Leave the room and head to the very end of the hall. Talk to the KGP Agent in the control booth and eventually he'll tell you what makes him fall asleep. Go back to Ping and Pong and fill in the blanks like so (although there are many valid combinations): 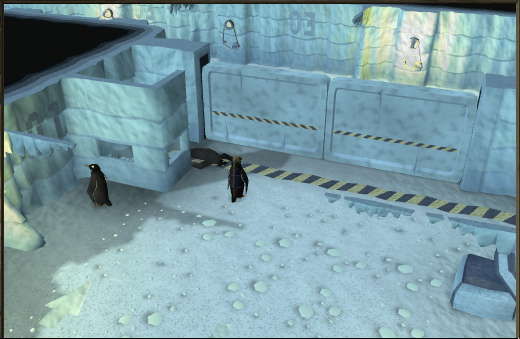 6. Go talk to the guard, and if you used the right combination, he will fall asleep. Use the controls and go through the door. Head right into the war room where you will find several dwarves. Speak to one of them in your penguin suit and they won't believe you're not a penguin. Leave the suit and talk the a dwarf again. They'll ask for help in escaping the stronghold. After the conversation leave the war room, the penguins will identify you as a threat and remove you. You will show up right next to Larry. Make sure you have the four planks, eight silk, a needle, and a single spool of thread. Talk to Larry and get shrunk again. 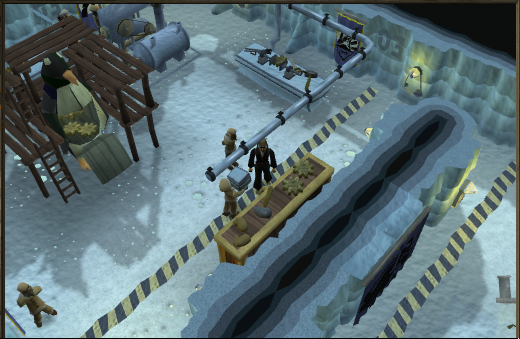 7. Re-enter the stronghold and make your way back to the war room (the guard is still asleep so head straight for it). Talk to a dwarf, leave the suit again, and you'll instruct them how to make the suits. The dwarves will now show you how to disable the pengmersible. This is the part where you'll need to pay attention. This includes a tool box with a wrench, some wire cutters, and various other tools of the sort. They will tell you how to do so, and then you will need to do the same: 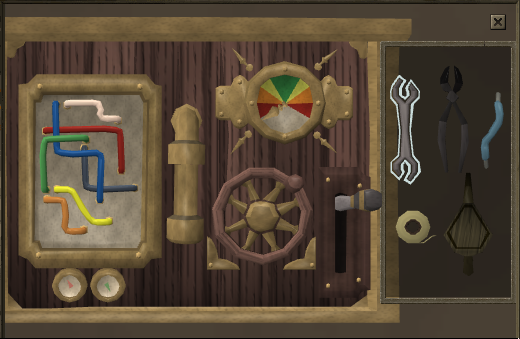 8. Leave the room again to be kicked out of the stronghold. Update Larry on what is happening and he'll tell you to find Noodle, the penguin who made you the fake ID card in Cold War. He can be found just outside of the stronghold entrance. Talk to him and ask for information as to the whereabouts of the pengmersible. He'll agree, for a price. Agree to be in debt to the Fettuccine Mafia and he will say that the information is in the room full of cubes. He will give you a KGP ID card so you can get past the guard.

9. Re-enter the stronghold and go into the first room on the right. This room can be a little tricky as you will need to avoid being seen. The best path to take is illustrated above. The blue points are where to stop and wait for the penguins to look the other way, and the yellow lines are the paths to take. Once you reach the top-right cubicle, search the room and get the telegram. You will need to follow the same path to get out, do not let the penguins see you or you will have to redo the maze! Leave the stronghold and update Larry. 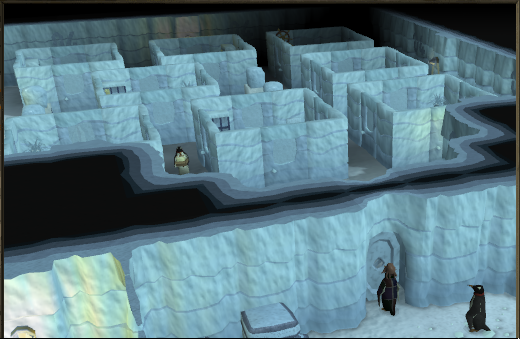 10. Head to Yanille, leave the city, and head for the south-east corner outside of the walls. You should see Larry. Get into the penguin suit, and blow the conch shell while wearing one of the hats. You'll have to do the signal that the penguin you interrogated told you. It involves three different emotes, and if you can't remember the combination and didn't write it down, you will need to head back to the stronghold and talk to the prisoner to get it back. 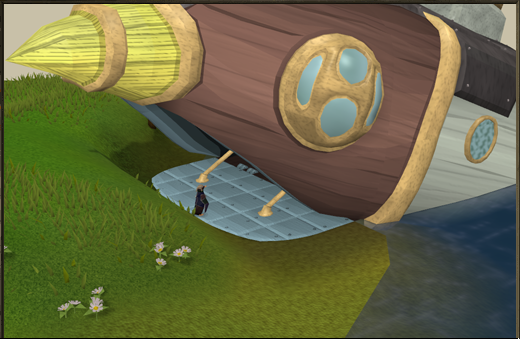 11. You will see a short cutscene with you boarding the pengmersible. This will be a side-scrolling style area. Go up the ladder and keep going right until you reach the captain's quarters. After talking to him, he will reveal that he is now a sea slug. He'll throw you into the brig after a fairly long conversation. Once there, search the nearby hat stand and you'll collect some random items. These will be replacements for the tools you lost. Go pick the lock on the jail door (with a swordfish) and you'll be out. Walk over to the engine panel and get to work. Here's how to do it:

12. After you pull the swordfish a cutscene will commence showing Pecaling Pax and Larry back in a straightjacket. Pax tricked you and Larry into doing all of the legwork to find the submarine; the dwarves were from the red axe and only told you how to redirect the pengmersible to where PAX wanted it to go (they see the penguins as worthy world leaders). You're now stranded on an island with no way to get home... 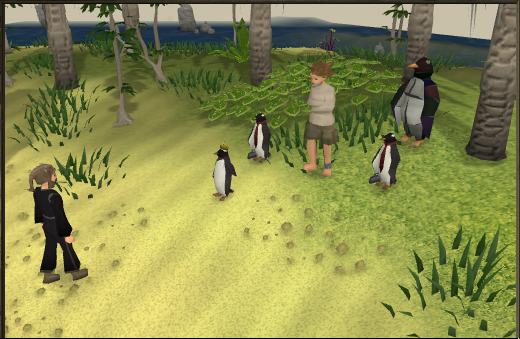 13. However, you'll notice something odd on the island; a polar bear trying to appear as a tree. His name is Chuck, and he's part of the "PBJ", the counter-spies to the penguins. He'll say you're the only one Larry trusted, and that in his absence, you're to be trusted by the PBJ as well. He'll help you back to Ardougne. 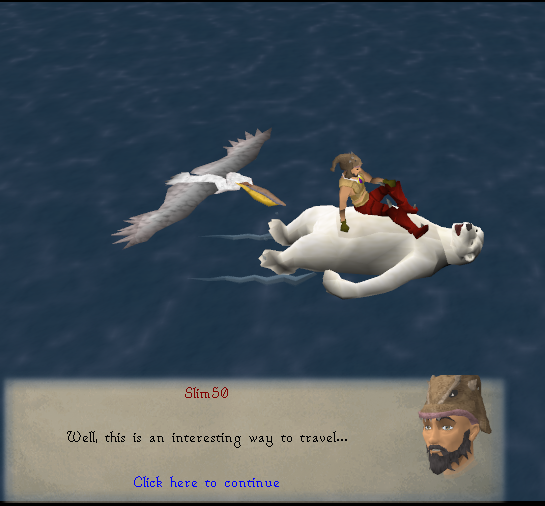 14. Once back in town, talk to Chuck and the quest will be complete. 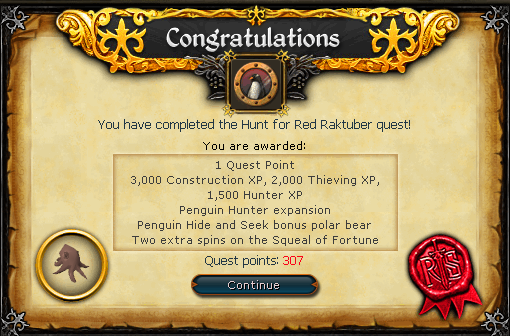 It should be noted that after this quest you’ll need to talk to Chuck the polar bear for penguin points because Larry is in the Motherland. Also there is a new hunting area up around the iceberg outpost.