In Aid of the Myreque Quest Guide

Speak with Veliaf in the Secret passage under the Tavern in Canifis.

To start this quest you want to make your way to Canifis. Find the trap-door behind the Tavern and make your way down the secret passage. On the eastern wall you’ll find a stalagmite that you can squeeze past. It’s the same one from the "In Search of the Myreque" quest. You’ll find yourself in a room with Veliaf and his followers. Speak with him to begin the quest.

Veliaf will tell you that the Vyre’s know of their hiding place. He will tell you of Ivandis and an artifact of great power. Then he’ll make you run down to Burgh De Rott and start doing chores for the local villagers so that they may let you start a new headquarters for the Myreque.

For this part of the quest you'll want to have a pickaxe, a spade, a bucket, a hammer, planks, and a piece of food.

Leave the passage and head south through the marshes to the boat. Take it to Mort’ton and head southwest til you find a bridge. Cross it and you’ll find yourself in Burgh De Rott. Talk to Florin across the fence and he’ll accuse you of being a vampyre. 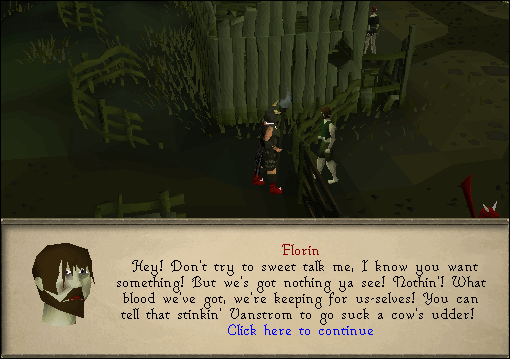 Place a piece of food in the open chest and you enjoy an extremely short cut scene. Afterwards you’ll be granted access to Burgh De Rott. Now you’ll want to begin asking around for hiding places. Talk to Florin again and ask if there are any “out of the way” places around town. He’ll tell you about the cellar at the Inn, but it’s caved-in.

Head over to the Inn and use your pickaxe on the rubble to clear the trapdoor.

When you’re down there you’ll find that you have to clear away 15 pieces of rubble. You’ll need your pickaxe, a spade and a bucket for this. Mine it, and then use your spade on it. The rubble will fill into your bucket. It can hold three layers of rubble. Unload the bucket outside at the rubble pile by the inn until the basement is fully cleared. Within the piles of rubble you’ll find a scroll and a plaster fragment, as well as nails. Keep them! They’re useful later on!

When you finish clearing out the basement you’ll find a plaque on the wall. It’s not particularly important right now, so head back to Florin and ask to help fix up the town. He’ll tell you to head over to the general store to help the owner. He’ll ask you to check the roof and the walls. You’ll need your planks for this. You’ll either need to have them on you or if you’ve done Shades of Mort’ton, you can buy them from the general store. 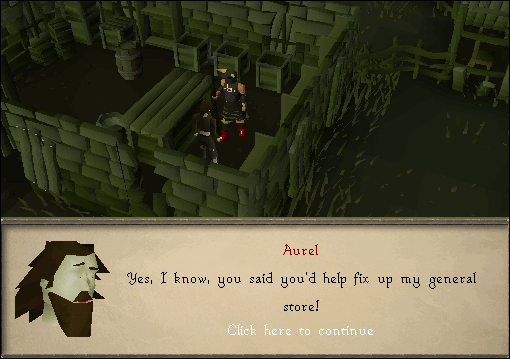 Once you’ve finished repairing his store he’ll ask you to restock it. You’ll need 10 bronze hatchets and either 10 snails or 10 mackerel (varies between players) and 3 tinderboxes. The easiest way to get the mackerel is to fish them using a big net in the southern part of Burgh de Rott near the bank or teleport to Catherby and buy them in the fishing shop there. To get the hatchets go to Bob’s Axe Shop in Lumbridge.

Fill the crate with supplies for the store, take them back and you’ll be instructed to go fix the bank. Talk to Cornelius and he’ll tell you what to do. You’ll need planks, nails, and 1 swamp paste. Fix the booth, then you’ll need to fix the hole in the wall on the western side of the building. After that you need to recruit a banker. Ask Cornelius if he’d like the job and he’ll take it. You’ll finally have a bank to work with in town. 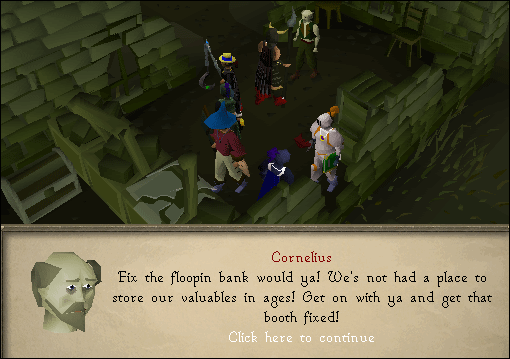 Now that the bank is fixed, ask around town to find out you need to fix the furnace. It’s in the southeast corner of town. Make your way over and use two steel bars, a hammer, one piece of coal, and your tinderbox on it.

Once you’ve done that you get to watch a compelling cut scene between Vanstrom Klause and Gadderanks. Unfortunately the furnace you’ve repaired is attracting the wrong crowd. Gadderanks will be at the general store. You’ll need to get yourself a Blessed Silver Sickle {made with a silver bar and a sickle mold) before going into the store. If you don’t have one yet, use a Silver Sickle on the nature altar in the Nature Grotto.

Enter the general store and talk to Wiskit, Gadderanks and a vampyre. They'll attack you after that. Have your Blessed Silver Sickle equipped and kill the vampyre juvenates.

After you kill the first vampyre, Veliaf will appear to help you. Then attack and defeat Gadderanks and he’ll tell you that the vampyres fear silver dust, garlic, harralandars, and red spiders eggs.

After Gadderanks' spiel talk to Veliaf and he’ll ask you to return to the Hollows to help organize the Myreque. Before you do so, make another sickle and go bless it. In order to hold two in your inventory you’ll need to drop the first one, bless the second, and pick the other up. When you reach the hollows talk to Radigad Ponfit. Then speak with Ivan. You need to take him to the Temple at the River Salve. When you speak with him, you'll decide on what route to take. 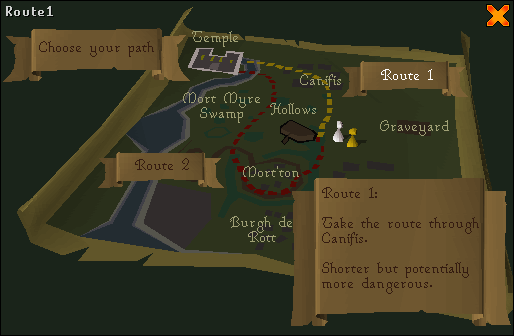 Route 1 is more dangerous, but shorter. Route 2 is longer, but less dangerous. (Route 1 is actually probably easier…you only get attacked once, but the vampyres are a higher level.) Before you choose a way, give Ivan the Sickle and any food you may want to give him. This may help in the proceedings. Once you’ve made it to the temple go talk to Drezel . Talk to him until he gives you the library key.

The key is for a hole in the wall in the northeast corner in the same room as Drezel. Use the key on it and it will open a trap door. Go down it and search the book cases until you have 3 books. Read them and then head to the Secret Passage under the Canifis Tavern. Find the Tomb and use a piece of soft clay on it to get the mold for the staff. Then head to a furnace with the mold, a mithril bar, a silver bar, and a sapphire. Once you’ve made it, cast a level 1 enchantment (1 cosmic rune & 1 water rune) on it and head back to the Salve Temple.

With a piece of rope in your inventory, dip the rod into the well and then run down to Burgh De Rott. Talk to Veliaf to collect your reward. 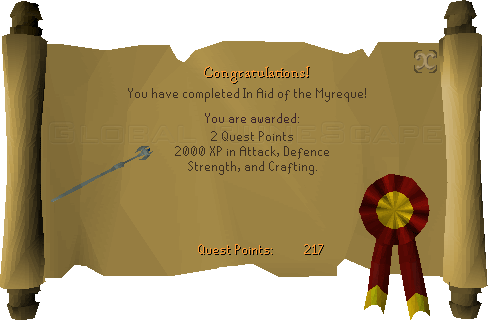 In order to use the Mort’ton General store, you’ll have to have finished Shades of Mort’ton. Also if you have an ectophial, it’s good to use when making the staff…also acient magicks would be a bonus for the Canifis Teleport.