In Search of the Myreque Quest Guide

1. Talk to Vanstrom Klause to start the quest. He asks you to give the Myreque these weapons: 1 Steel longsword, 2 Steel shortswords, 1 Steel Dagger, 1 Steel Mace and 1 Steel Warhammer. Before continuing, make sure you have all the items you need for the rest of the quest, as you won't come to any other banks while you're on the quest.

2. Go to the eastern part of Mort'ton and talk to the boatman, Cyreg Paddlehorn [map] 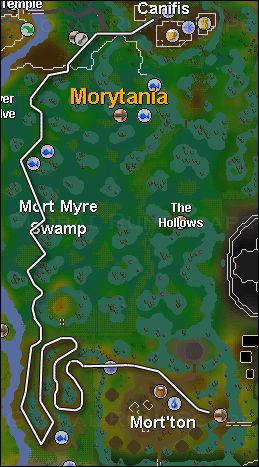 He tells you that he knows about the Myreque, but doesn't want to take you to them, nor tell you how to get to him, so you will have to convince him. Select these options when you are talking to him:

Then, he asks you for protection against ghasts. Show him the pouches, and he will then ask you for 6 planks: 3 for you and 3 for him. Give him the planks, and he will let you take the boat and a brief explanation of where you are going:

3. Board the boat. Cyreg asks you for 10 gp. Give him the money, and you'll be able to take the boat.

4. From the destination point, head north to a bridge [map], which is made between two trees. Climb the tree and cross the bridge. As you start walking on the bridge, it will break, and you have to repair it.

As you continue walking on the bridge, each part will break. Right-click on the broken bridge and select "Repair" to repair it. Each part will take one plank and 75 nails.

5. Head a bit north and talk to Curpile Fyod. Tell him that you've come to help the Myreque, and that you've brought weapons. He asks you 3 questions about the Myreque. These are some possible questions and answers:

6. After you've answered the questions, head a bit north, and you should see some Wooden doors. Enter it; this is the way to the Myreque. 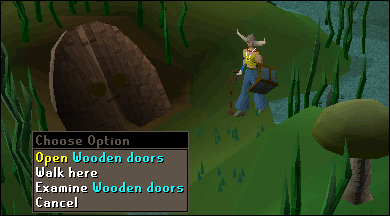 7. Head a bit north and look for the stalagmite you can squeeze-past: 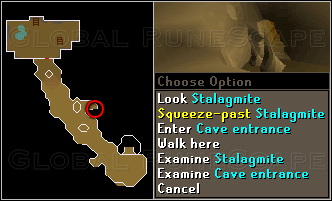 8. Talk to Veliaf Hurtz. He says that he is currently busy, and that you could introduce yourself to the other members of the Myreque. Talk to each of them (You don't need to ask them any questions, you can just say "Ok, thanks").

9. Talk to Veliaf Hurtz again. He will thank you for the weapon. When he does so, a cloud appears and Vanstrom Klause appears out of it. He summons a Skeletal Hellhound (level 97). Fight it, and it will drop 4 big bones and 2 rubies (its eyes). 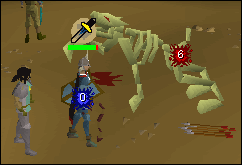 10. When you have defeated the hellhound, talk to Veliaf Hurtz. Ask him how to get out. Then, exit the room by entering the cave entrance in the southern part of the room. Then, head to the northern part of the dungeon and find the wall you can move. Search it.

Then, climb up the ladder, and you will emerge just south of the 'Hair of the Dog' tavern. Go inside, and you will see that Vanstrom Klause has disappeared, and there's a stranger in his place. Talk to him to complete the quest. 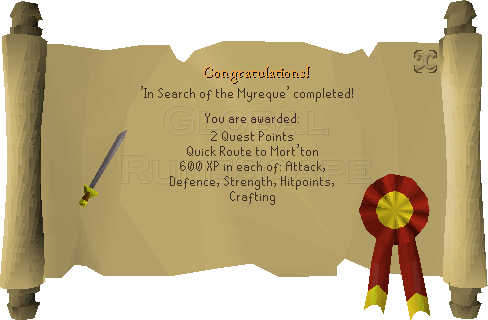