Drezel, which is found in the tunnel on the way to Canifis.

1. Talk to Drezel, which can be found in the tunnel on the way to Canifis. He will tell you that his friend, Filliman, has been missing. Your task will be to find him.

2. Head to Morytania by going through the Holy barrier just south of Drezel. Cross the bridge, and go to the south until you reach a gate [map].

3. Keep going south until you reach an island [map]. Since the ghasts are after you, you should run. When you reach the island, go south of it, and jump over the broken bridge. Be sure to wear your Amulet of Ghostspeak and try to enter. Filliman Tarlock will appear. He's a ghost, and that's why you need your Amulet of Ghostspeak. However, he doesn't realise it, and you'll have to persuade him.

4. Take the Washing bowl, and you will see a mirror under it. The washing bowl will respawn, but you can still pick up the mirror. Use the mirror with Filliman. If he's gone, try to enter the grotto again, and he'll appear. He tells you that he needs to find his journal.

5. Search the Grotto tree. You will find his journal. Read it, and then use it with Filliman. Ask him what his plan is, and then ask him how you can help. You will need 3 things: "Something from nature", "something with faith" and "Something of the spirit-to-become freely given". He also gives you a druidic spell and tells you that you need to be blessed to use it.

6. Go to the north and back to Drezel. He will bless you.

7. Head back to the swamps. Go next to a log and cast the spell, and you'll get a piece of Mort Myre Fungi. Bring this to Filliman.

8. Now, look at the 3 stones laying on the ground outside the grotto. To prepare the spell, follow these instructions:

Talk to Filiman again. Be sure to stand on the southern stone when you talk to him. Tell him that you've solved the puzzle.

9. Enter the grotto. This time, you will be able to enter it. Search the grotto in the middle of the room, and Filliman appears again. He will do the transformation into a nature spirit, and tells you that you need to get a Silver Sickle.

10. Go to a city with a furnace, such as Falador or Al-Kharid. Use your silver bar with the furnace while having the sickle mould in your backpack, and craft the Silver Sickle. Then, head back to Filliman, which is now the Nature Spirit. He will bless the silver sickle for you.

11. Go out of the grotto again, and cast the Bloom spell with the Silver Sickle next to a log. You need 3 fungies. After you've filled it, a ghast will appear. Kill three of them, and go back to the Nature Spirit again. He'll cast a spell which transforms the grotto into a Nature Altar, and you'll complete the quest. Congratulations! 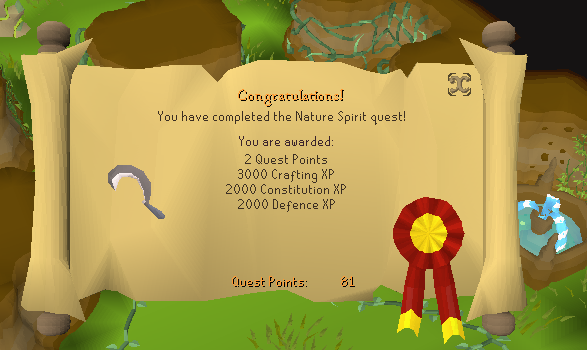