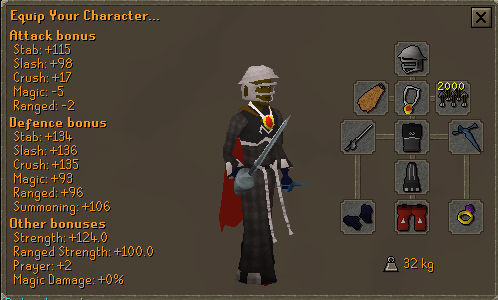 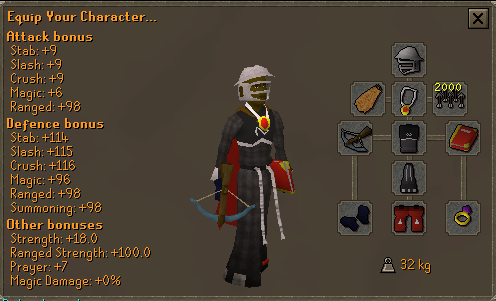 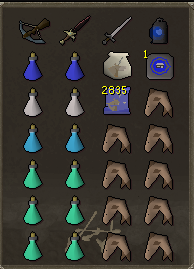 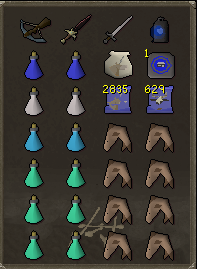 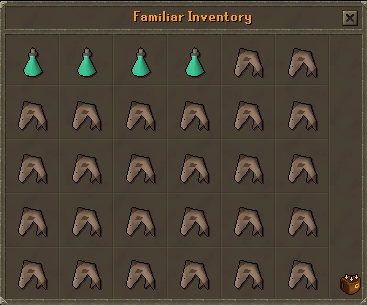 The inventory is self-explanatory, you will need Darklight and a Sapphire Lantern. Super sets/overloads are a must. Prayer potions and Super Prayer potions are important as well. The amount of potions depends on you prayer level, Higher prayer levels require less potions. Enhanced Excalibur is useful for healing when the special bar is available. Summoning pouches depends on your level, with the Unicorn Stallion being recommended standard, although Pack Yak's are great for longer trips.

Remember: Untradeable potions can not be held by familiars.

3. Getting to the Demons 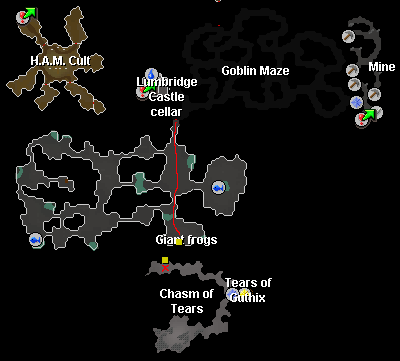 Start from Lumbridge basement and work your way south until you see some Light Creatures (This is in the same cavern as Tears of Guthix). Use your Sapphire Lantern on one of the creatures to enter the cavern.

When you land, work your way towards a statue of a Demon. Climb to the top and enter the nose of the statue. From here work your way past the huge circle monument from "While Guthix Sleeps". It's a long run, halfway in recharge your energy, then get ready by putting on Protect from Magic Prayer. There are 4 different spots to use and 2 are more effective. If you get targeted by more than 1 Tormented Demon, you need to run to safety quickly. These monsters are very strong and it is not recommended to take them on more than one at a time or while not paying attention. Be very careful in here.

Luring can be hard at first but very easy once you get the hang of it. Follow my steps in this picture. 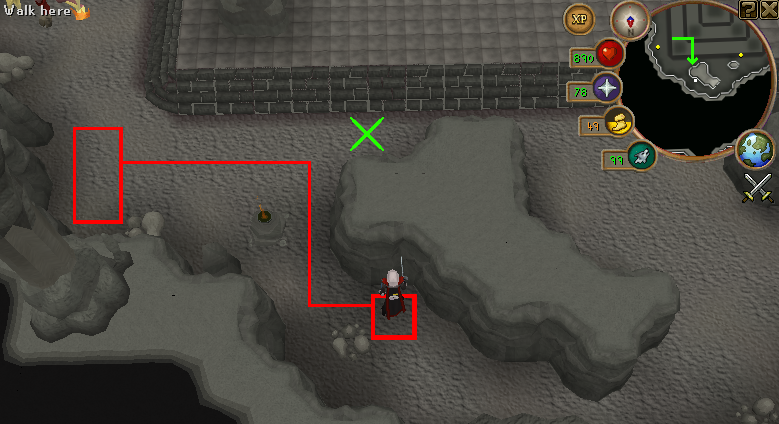 The above picture shows where you should be standing. Have Protect from Magic prayer on and when the Demon spawns it SHOULD attack you. If not you need to range it. Then run to where the character is above. The Demon should move to the green X if done correctly. If not keep trying. If someone is also luring at the same time in the next area, it might attack the other person, or theirs will attack you. If this happens, log out then back in. None of the Demons will be on you and you can re-lure them. It can be difficult to get in at first.

For the fight itself, it is important to turn on the background sounds (not the music). Doing this will make it easier to identify and figure out the Demon's attacks.

Sounds
Ranged: Sounds almost like a whip. The projectile is yellowish brown and hits up to 290. It is very dangerous if you don't have protect from ranged prayer on.

Mage: Sounds like a regular magic attack. Looks like a red fireball and hits up to 290. Also very dangerous if you don't have protect from magic prayer on.

Multi-Magic: Every minute and a half the Demon will throw a multi-magic attack that hits everyone near by. It isn't too dangerous but helps to have protect from magic prayer on. Every lifepoint counts.
Melee: The least dangerous, most people don't pray melee. When a Tormented Demon melees, instead use Soul Split to heal. It's sound is very different, like a swiping sound. Hits up to 189. Protect from melee is advisable just to be on the safe side, but the Demon's melee attack is very inaccurate compared to the other two. 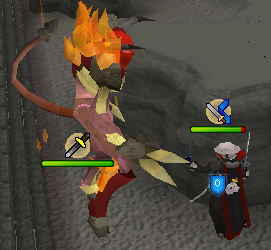 The barrier reduces approximately 75% of your max damage. Only Darklight, a very inaccurate weapon can break the barrier for 60 seconds. You can also hit and do damage with the Darklight when the barrier is down to prevent it from coming back up. The fight can drag on for up to 3 minutes if you let the Demon bring the barrier back up.

After you have dealt 300 damage in 3 turns, it will switch prayers. Tormented Demons will never switch to magic prayer if you're not using Magic. They change styles randomly so be careful. Usually it gives out a roar and spits out a multi-magic attack when it does switch styles, so be on the lookout for that.

If you're reading this guide, then of course you're probably gearing up right now as you read this so you can get yourself a pair of Dragon Claws. The Tormented Demons are also famous for dropping numerous Blue Charms, Effigies, and Elite Clue Scrolls. Other than that they also drop Dragon Platebody pieces, tons of rune, seeds, herbs and gems (Mostly noted Diamonds).

Good luck on getting yourself a pair of Dragon Claws. Tormented Demons are very difficult to kill, meaning kills per hour will be in the 10's to 20's depending on your levels and gear. It all depends on how much you are willing risk on gear. If you are so unfortunate as to die fighting Tormented Demons, don't expect for other players to bless your grave. This is a very competitive area and each prayer point a person has is precious to them. Also, having a well prepared POH (Player Owned House) with a Prayer altar, summoning obelisk and Lumbridge teleport would be very helpful to you and make trips quicker.