Use any fairy ring and speak to Fairy Very Wise.

A Plea For Help

1. Use any fairy ring and your teleport will be interrupted and instead you arrive at the Sparse Plane. Fairy Very Wise then asks you to help the fairies reclaim Zanaris from the orks. She will then offer you a one time teleport to Resistance HQ. Accept it and go further into the HQ to speak to the Fairy Queen.

3. The Tooth Fairy needs you to retrieve her wand from her house. To do this you must first make a tooth extractor by using a hammer with a pair of secateurs. Both the hammer and secateurs can be found on top of the crates in the depot northwest of the Tooth Fairy.

4. Use the fairy ring to return to Zanaris and then go northwest to find the Tooth Fairy’s house. It is the house just north of the bank with Gnarly inside. Use the tooth extractor with the door to pick the lock, then go inside. Talk to Gnarly and keep on praising him until he asks for milk. If you only brought a bucket there is a dairy cow just east of the wheat field. Give him the milk then pick him up so he can take the want to the Tooth Fairy. To get back to the Tooth Fairy use the fairy rings AIR, DLR, DJQ and AJS in that order.

5. Speak to the Tooth Fairy to give her Gnarly and her wand and then turn on the projector to receive another briefing. For this mission you’ll need to extract a tooth from each of the three ork generals. But first you must have a tooth replaced and receive a dossier containing information about the whereabouts of the generals. Stand on the yellow flowers south of the Tooth Fairy and wave to let her know you’re ready to have your tooth replaced.

6. Now you must find the three generals and extract a tooth from each. 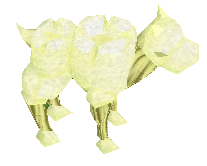 7. Speak to the tooth fairy and she’ll have another briefing for you. Turn on the projector to watch the instructions for the final battle. Now prepare for the battle. The following items are needed:

8. Once ready, use the fairy codes BIR, DIP, CLR and ALP. Look through the fairy tree and then speak to the tooth fairy who’ll explain what you have to do. Now squeeze through the fairy tree. Put on the Protect from Melee prayer and then plant the teeth in the farming patches in the southern end of the room. Now focus on killing the orks and generals. Occasionally one of the generals will attack the farming patches but this can be prevented by attacking the general. If the attack damages the patch, wield the fairy wand to heal it. When the teeth are fully grown they will spawn ivory replicas of the generals, aiding you in battle, they can be healed when wielding the fairy wand. The ivory orks will only be able to destroy the Fairy Godfather’s shields once all the generals and their orks have been killed. When all his shields are down you can attack him and he will surrender, then speak to him.

9. A short cutscene ensues where the Fairy Godfather is sucked into the rift and the rift explodes despite the attempts by the fairies to close it. The Fairy Queen teleports everyone back to Resistance HQ and gives you a magic watering can and the ability to use fairy rings without a staff. She then offers to teleport you to Martin the Master Gardener in Draynor Village. Speak to him to complete the quest.

Note that the Milk tooth creature is fed using buckets of milk.