He says he needs people for his crew, and he'll take anyone. After a long piece of dialogue you finally start the quest and Bill tells you to meet him at his boat.

2. Cross the Gangplank on his boat (it's in the most Eastern Dock).

3. You get on the boat, and there's a cutscene. The cutscene shows that the ship is getting attacked by pirates on another boat. And it's up to you to repair your boat, and destroy the other pirates' boat.

4. Now that the cutscene is over, open up the Repair locker (it's a big box near you) and take two ropes.

5. Now head to the gun locker and get a fuse. After that head south and pick up the tinderbox.

6. Now head up to the main part of the ship. Climb the climbing net.

Use your rope with the hoisted sail. Now just watch as you jump over to the other ship. (Or hit the water, and swim to the ship. If this happens you'll end up losing a lot of energy.)

7. Take some gunpowder from the powder barrel near the cannon. The options should look something like this:

9. Use their climbing net and attach your other rope to their hoisted sail. Once you do that you'll be on your ship. Talk to Bill again once your on your ship.

You repair the hull by using the planks with the hull. You then use the swamp paste and your done.

Once you've repaired all three talk to Bill again.

11. Bill says you'll need to plunder the other ship. Grab two ropes and head on over to the other ship. Climb the climbing net, use the rope with the hoisted sail, and your there.

12. Now go downstairs. Loot the crates, plunder the plunder-chest, and ransack the barrel. Now if you don't have 10 plunder by now, wait a minute or two. The plunder should respawn. I suggest killing pirates until it has. Once you have 10 plunder, go to your ship.

13. Once on your ship, go down to the plunder chest and drop off all 10 plunder. Now talk to Bill teach. (If you have any extra plunder while talking to Bill teach, he'll just take it.)

14. He'll tell you that he needs you to repair the cannon. And then after that blow the other pirate's ship out of the water.

15. Go downstairs and fetch a cannon barrel. Now go upstairs, click "Repair Cannon" and the cannon will be repaired. Now talk to Bill teach yet again.

16. Bill will tell you to go back downstairs and get the following items from the gun chest.

After that go upstairs and get gunpowder from your own powder barrel.

17. Now here are the steps for firing the cannon the first time.

18. Talk to Bill again. He'll tell you he needs you to fire cannonballs in the other boat.

Go downstairs and fetch 3 Cannonballs and 3 Fuses from the Gun Locker. After that go upstairs and get 3 sets of gunpowder.

19. Here are the steps for firing a cannon with a cannonball.

20. Hit the ship 3 times and you'll sail to your destination. (If your cannon explodes go downstairs and get a cannon barrel.)

21. There'll be a cutscene where your at a bar in Mos Le'Harmless. After its over you'll get your reward. Quest complete! 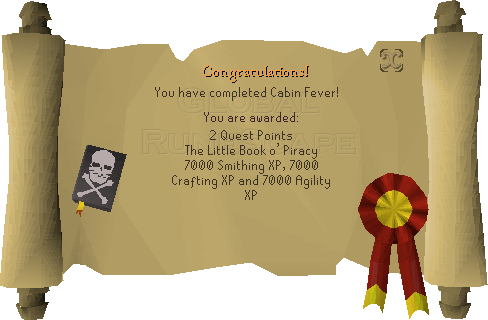