1. Teleport to the Ectofunctus using your ectophial. Refill it, and head northeast. You should see a dock with Pirate Pete on the docks. Talk to him for awhile and you'll start the quest.

He'll start talking to you about recovering a family sword... and a big monster. (Later on you find out it has nothing to do with the quest) He hits you on the head and you get on the pirate ship.

2. You'll be on a ship with Captain Braindeath. Talk to him for awhile and you'll get a blindseed for growing blindweed. (An ingredient in the rum) Go to the southern steps and go outside. You'll see a lot of zombie protesters. Find the eastern farming patch. (The western and eastern farming patches are right next to each other) All the farming areas but one are trashed. Use the only non trashed farming area for raking the blindweed and planting it.

After you plant it it takes around 4 minutes to grow. The plant doesn't need any watering or nurturing. Just time. Unfortunately the zombies will attack you (Lvl 57) So I just hid behind the bush south of the farming patch until the plant grew. You even got a message when the plant was done.

4. Now talk to Captain Braindeath. He says he needs stagnant water for the rum. Make sure you have your bucket and go outside again. Once your outside go to the west and look for a guy named 50% Luke. Yes his name is actually "50% Luke". Try to open the gate he is guarding, and eventually through dialogue you'll get by.

5. Make your way north up the mountian and you'll find a little lake with a path leading up to it. Follow the path and use the bucket on the stagnant water.

6. Head back to the boat, use the stagnant water on the hopper and talk to Captain Braindeath. He'll tell you to fish five sluglings. He gives you a net to catch them.

Head outside and go towards the farming area. Go south of that and fish at that area until you have 5 catches of sluglings.

Once you have 5 put them in the pressuriser. It's next to the hopper. After that pull the lever and talk to Captain Braindeath.

7. Captain Braindeath tells you about a spirit in the brewing system. So he gives you a wrench and tells you to take it to Davey (Hes in the western quarters near you.) to get the wrench blessed.

8. Go to Davey and get the wrench blessed. He tells you that it will be the only time that this operation is free, and that the wrench will make your prayer potions more effective.

9. Use the wrench on the part of the brewery thats shaking. You should say "The power of Guthix compels you!" and then a spirit will come out (level 150). As long as you put on protect from melee it should be as easy fight.

10. Now that the spirit is dealt with, talk to Captain Braindeath. He'll tell you he needs a fever spider carcass to put into his rum. Go downstairs (use the ladder on the northwestern side.) and kill a fever spider. NOTE: Make sure you have Slayer Gloves equipped while killing one.

11. Get the spider carcass, put it in the hopper, and talk to Captain Braindeath again. He tells you that the rum is finished, so go give some of it to Captain Donnie. Use the bucket on the output tap (the southern end of all the brewery machinery) and then go to Captain Donnie.

12. Give Captian Donnie the rum, and then go back to Captain Braindeath. 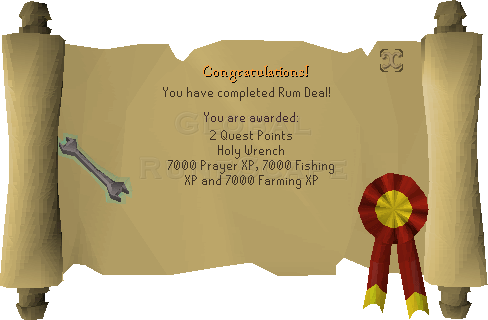