Inspect the body inside the Lunar Isle rune essence mine

To start the quest, enter the cave on the north-east section of the Lunar Isle. (remember to take your Seal of Passage with you) Walk over to the Rune Essence mine and enter the small opening near the quest symbol on the mini map. 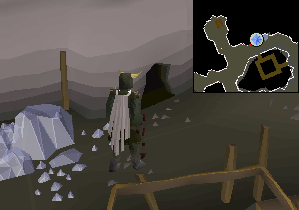 You will find a severely injured adventurer there. After you decide to help him, an interface like this will appear. 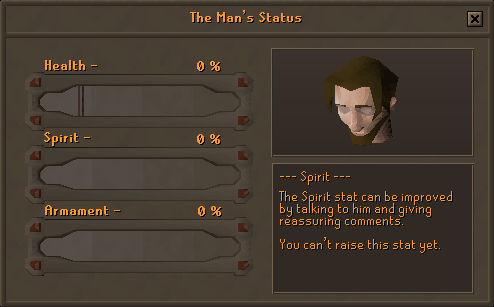 Eventually, he will sit up and talk to you for a moment. He will tell you that his name is Cyrisus, and that he came to the Lunar Isle and was attacked by the Suqahs. He ran into this cave, badly injured, and has been lying there ever since. Keep raising his health and spirit.

Once his stats get high enough, he will stand up and talk to you some more. He will tell you to get him some equipment out of the bank. Go back and talk to the, err, new banker. It turns out that he is the navigator that you hated on the pirate ship. Jack will let you take items out of his bank. His bank will pop up on the screen and you will be allowed to put stuff into a chest. 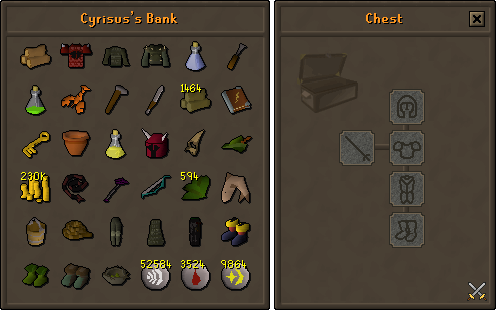 He has some nice stuff there! It is a pity that you cannot try some of it on. Anyways, when you talk to Cyrisus, he will tell you if he likes what put in the chest. (this can be done via the contact npc spell) He likes the set up Dragon Medium Helmet, Ahrim's Top/Bottom, Abyssal Whip, and Ranger Boots the best. Take these out and go back to the cave. Give the equipment to him.

Raise his health and spirit to the maximum now. Once you have achieved this, he will tell you why the Suqahs beat him so easily.

He is what?? Good grief! What kind of an adventurer is afraid of combat?! Cyrisus will now tell you one of his reasons to come to the Lunar Isle: to overcome his fear of combat in the dream world. He will tell you to talk to the Oneiromancer.

Head to the south-eastern part of the island and talk to her. She will tell you that you will need a Potion of Shared Dreaming in order for you to go into the dream world together. Fill the potion with water and add a Goutweed and a ground astral rune to it. To make a ground astral rune, break an astral rune with a hammer and grind it up with a pestle and mortar.

When you have made your potion, get some good fighting gear and plenty of good food. (monkfish, sharks, tuna potatoes, etc.) The monsters in the dream world are tough and you will not be able to use prayer.

The first monster is the only one you will have any worries with. It deals around 150-200 life points plenty of times in the battle. As you fight, Cyrisus may use lunar spells such as Vengeance Other. 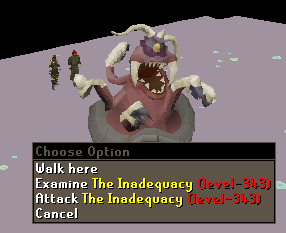 The next monster is called The Everlasting. It is easy compared to The Inadequacy. 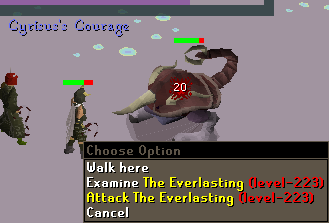 Next you will have to fight The Untouchable. This one is kind of tough to hit, but is otherwise easy. 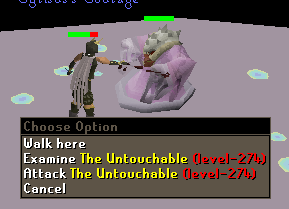 Lastly, you will have to fight The Illusive. The only thing notable about this one is that it can dig into the ground and appear at any location of the area. Just look around and keep attacking it.

After you defeate The Illusive, a cut scene will be shown of Cyrisus crushing it and thus conquering his fear of combat. You will be transported out of the dream world. Go back to the Oneiromancer and complete the quest. 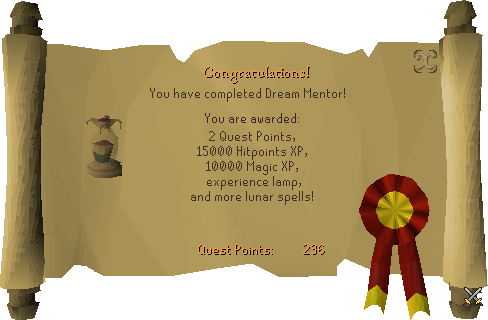 The new lunar spells that you have access to are neat things such as the Stat Spy spell, which allows you to view another player's skill levels.