Talk to Lokar in the docks in Relekka.

Means to get into the four elemental altars: Air/Water/Earth/Fire Talismans or Tiaras, the abyss can also be used to access the different altars.

Weapon, Armour, and Food is advised.

Start and Getting onto the Ship

Talk to Lokar Searunner to begin the quest, if you do not have the required stats/quests he will tell you to go away. Lokar will gripe about the Fremenniks a little bit and talk about how he became a pirate. He will mention the Moon Clan, a mystical group with a great understanding in magic. Anyways, you agree to go there and try to establish peace between the Fremenniks and the Moon Clan, as they have been at war for a long time. He will tell you to go to Brundt the Chiefton to get a Seal of Passage, keep this with you while you're doing the quest. Go back to Lokar and head out to the Pirate's Cove, climb the ladders and board the ship. 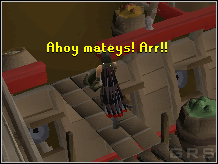 Talk to the captain and explain your buisness, tell him that you're ready to go. There will be a short cutscene in which the ship will sail in a circle, you'll get roped into finding out what went wrong. The captain will suggest to talk to the navigator, head down one of the nearby ladders and talk to 'Birds-Eye' Jack. He'll be no help what so ever and will tell you to talk to the captain. He says that your suspician of the navigator, that he did it, is wrong and that you should talk to him. Again. This time Jack suggests that a jinx was put on the ship or a crew member, once again talk to the captain.

Talk to 'Eagle-eye' Shultz and he will give you information about jinxes, talk to the chef. He will say that a feast took place, a feast with drinks. Maybe one of the members of the Moon Clan was offended by a drunken pirate? 'Lecherous' Lee says that the first mate dissapeared during the feast, talk to First Mate 'Davey-boy', he's one level down from Lee. He says that he went to the ship to do a routine check, a check that was supposed to be done by the (missing) cabin boy. Walk back up to the top area of the ship and talk to the cabin boy.

It was him! A Moon Clan girl got him to paint magical symbols all around the ship so that it would be jinxed! The cabin boy will give you an emerald lens and a bulls-eye lantern, use the lens on the lantern to get an "Emerald lantern". Use your trusty tinderbox on the lantern to light it. Now for the symbols.

1. Cannon on the east side of the ship at the top level with the cabin boy and Lee. Use your lit Emerald lantern on the cannon to find the symbol and choose the "Rub away" option.

2. Wallchart on the northwest wall in the room with the first mate. Again, Use Emerald lantern with Wallchart and rub away.

3. Chest in the room with a whole lot of chests and crates at the north end (and lowest level) of the ship. Rub it out of existence!

4. Support on the lowest level, the most southern one. You can't right-click on the support to "examine" it but you can use your lantern with it.

5. Tall Crate just east of 'Beefy' Burns, the cook. This is the last symbol you have to clean.

Finally, you're at the Lunar Isle, home of the Moon Clan. Remember to keep your Symbol of Passage on or in your inventory at all times when you're on the Lunar Isle. Walk up to the village and a cutscene will take place. Before you do anything, head to the northwest side of the village (not in the fenced area) and talk to the cabin boy, it's pretty funny what he says.

Talk to Meteora, in the southwestern end of the village, and she will mention the Onerimancer. She hangs around the southeastern section of the island. Walk back to the entrance and walk south. Keep heading southeast and talk to the Onerimancer, she's next to the Astral Altar. You will discuss the possibility for peace between the two tribes, you will agree to do a ritual. You will need three things, a Potion of Waking Sleep, a Lunar Staff, and a set of Lunar Travelling Clothes.

The Potion of Waking Sleep Head back north into the village and go to the northern end with the "chicken house". Walk into it and talk to Baba Yaga for information about the potion. She will tell you that you need a Guam Leaf, a Marrentill, and a (ground) Suqah Tooth. Get the herbs and go kill one of the Suqahs for their tooth. There's one just north of the village's entrance. Keep the hide it drops, you'll need it for later. Fill your special vial with water and use the the ingredients with it. In order: Guam Leaf, Marrentill, Ground Suqah Tooth. Head back down to the Onerimancer and give her your "Waking sleep vial". 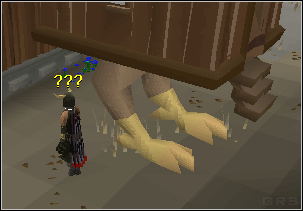 The Oneiromancer will tell you that you need a dramen staff for making a lunar one. She will also tell you that you will need to use it on all four elemental altars. You must do it in this order: Air, Fire, Water, Earth. Get out your talismans/tiaras and head to the different altars with your dramen staff(s).

When you have your Lunar Staff(s) made, go back to the Onerimancer for the next step.

Go to the northeastern side of the island and head into the cave there. Walk over to the place with the 2 gold rocks and mine one of the stalagmites for a Lunar ore. Smelt the ore into a bar and smith it into a Lunar Helm. Both of these are in Rellekka so go back and board the ship, sail back, smith the helm, sail back, and prepair for getting the rest of the clothing.

Talk to Rimae Sirsalis in the clothing store just south of the bank and ask about the ceremonial clothes. She will tell you that you can make the torso, trousers, gloves, and boots out of Suqah hides. Go out and kill 3 more Suqahs for their hides and tan them for 100gp each, a total of 400. Get your needle and some thread (you can buy some from Rimae if you don't have any) and make the four items out of 1 hide each.

Talk to Pauline Polaris and she'll offer to give you the cape, if you can guess her name. Say Pauline and she'll say that that's just an alias, you'll have to guess her real name. 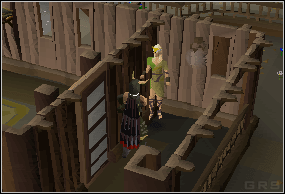 Talk to Selene and ask about the ring. She will say that it is buried somewhere around the island and will give you a clue. "From water's source you should follow, crossing the western-most bridge and travelling further south-westerly to a bloom of blue." 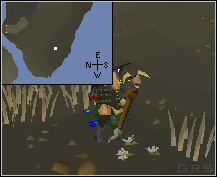 Talk to Meteora and she'll say that she lost her lucky tiara and that a Suqah has it. Go kill a Suqah and give her the tiara it drops. She'll give you the amulet as a reward. 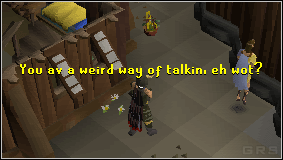 Give the clothing to the Onerimancer and she will give you all of the items that you've given her, provided you have the bank space. Head over to the bank and get your best axe (ie rune), a tinderbox, and food. Go to the ceremonial brazier that's in town, use the potion on the kindling, light the brazier use the kindling on the lit brazier. Talk to the Ethereal Man/Woman and walk over to the platform that you can "step-on".

Depending on which platform you stepped on, you'll go to a different game-ish thingy. The eastern, and closest to the book, one is a race. 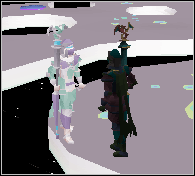 Obstacle Race: "The Race is On!"
Talk to the Ethereal Expert to begin this challenge. You'll have to take the right, curvy lane and he'll take the left, straight lane. Just do each obstacle as they come, each failed obstacle does damage so try not to die. That's what food is for though. When you beat him you will be teleported/sprung/whatevered out of the island and back to the main one. Talk to the Ethereal Man/Woman again. Head north to the blue one next.

Dream Tree Chopping: "Chop, Chop, Chop Away!"
Talk to the Ethereal Perceptive for this one. This one is a woodcutting challenge in which you have to chop down the dream trees and stack the logs in the center. You must get 20 logs stacked before the Ethereal Perceptive does. Run to the other side and start choppin da troys, err chopping the trees. Do at least four logs in one trip and you will have no problems. Once again, talk again about what you learned. Go to the next platform on the northwest side.

Cloud Hopping: "Where am I?"
The Ethereal Guide will tell you what to do here, you must get to the other side by hopping across the dream puffs. If you fall you will appear back at the first section of this island and will have to try again. You will not take damage if you fall. Use trial and error to complete this, try writing a series of numbers that represent the different rows and what ones to jump to, 1 would be the eastern row, 2 would be the next row, 3 the next, and 4 the last. Example: 3321111233322. Talk about the lesson again and head to the southwestern platform for the next challenge. 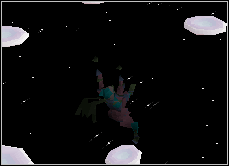 Dice Rolling: "A Game of Chance!"
Talk to the Ethereal Fluke and he will explain what to do. When he calls a number, you have to roll the dice to make it so that the top faces add up to the number called. IE 15=6+4+2+1+1+1

The dice have a selected set of numbers that they can roll so choose your numbers carefully.

Do this five times to complete the challenge. Once again talk and go to the next platform.

Fun With Emotes: "Anything you can do..."
Talk to the Ethereal Mimic to begin. He will do an emote which you have to copy, then he will teleport across the island and you will have to run to and talk to him. Again, he does an emote, you copy, he teles, repeat. Do this a couple times and you will complete the challenge. Talk about what you learned and head to the next platform, it's right next to the one that you were at. 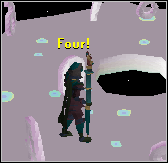 The Final Challenge
You will be transported to an island with two dream troImeantrees on it. There will be an NPC named "Me", it is level 79. You must defeat... you. Right. Beat him and you'll end up next to the Etheareal Man/Woman again, talk and read the book to be transported back to reality. Talk to the Onerimancer again to complete the quest! 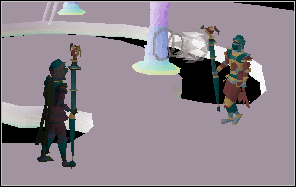 If you lose your lunar clothing, you can buy a new set from the Onerimancer again. To switch between your normal spell book and the Lunar one, pray at the Astral Altar. You can also craft Astral Runes at the Astral Altar using pure essence, level 40 Runecrafting required. You do not need an Astral Talisman (there isn't one anyway) to craft them as the altar is out in the open.