Speak to Martin the Master Gardener in the Draynor Village market square.

Beginning the quest and gathering information

1. Begin the quest by speaking to Martin the Master Gardener in the Draynor Village market square (you must not have pickpocked him recently, or he won't speak to you). He'll tell you that gardeners are suffering bad harvests, and asks you to speak to other farmers to get details. 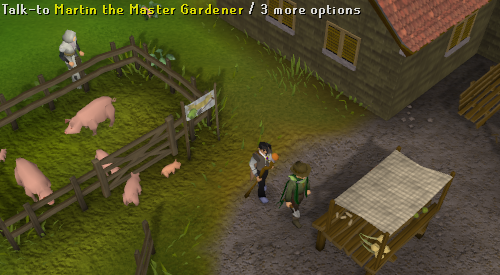 2. You can speak to any farmer, and you need to speak to 5 of them. Some suggested farmers are the ones between Draynor and Lumbridge, next to the bar in Port Sarim, near the tree patch in Falador, near the tree patch in Varrock, north of Catherby (teleport to Camelot) or west of the Ectofuntus if you have an ectophial, but you can also speak to other farmers. Ask them if they are a member of the Group of Advanced Gardeners. They will all give you different reasons, but the last one suggests that all the problems may be related to fairies.

3. Head back to Martin, who will say that you should talk to a fairy.

Trouble with the fairies

4. Get your Dramen staff or Lunar staff and head to Zanaris.

5. Go to the Throne Room in Zanaris. You may notice that the queen is missing, instead speak to the Fairy Godfather. He tells you that the Fairy Queen is sick.

6. You need to speak to Fairy Nuff, who is located north of the bank in Zanaris. She will give you a list of symptoms and ask you take them to a mage called Zandar Horfyre.

7. Zandar Horfyre is located in the top floor of the Dark Wizards' Tower west of Falador. Speak with him and he'll take the symptoms list. He suggests that you seek a necromancer named Malignius Mortifer, who had fought Tanglefoot long time ago.

8. Malignius Mortifer is northwest of Port Sarim, along with the four elemental wizards. Tell him that you need help with fighting a Tanglefoot. He'll help you if you bring him a skull from a grave near Draynor Manor.

9. Go to the north side of the manor (inside the fence surrounding it), and you'll find a grave. Use your spade to dig while standing on the grave to get the skull. If you don't have a spade, but you have a tool leprechaun storing it for you, you'll be able to retrieve it from the farming patch west of the manor. A spade also respawns in the easternmost room in the manor.

10. Take the skull back to Malignius Mortifer. He tells you that you'll need a pair of magic secateurs to fight the Tanglefoot. He will ask you to get three items in addition to a pair of secateurs, and take them to the Nature Spirit so he can perform the "ceremony of Phasma Phasmatis Natura". You can search Global RuneScape's item database to see how to get the specific items. You can at any time see which items you need by looking at your quest journal.

11. Once you have all the items, find the grotto tree, and enter it. Make sure you wear the Ghostspeak amulet, and talk to the spirit. If you have all the required items, he will enchant your secateurs. The secateurs will now have a green colour.

12. Head back to Zanaris, and go to the bank there. Withdraw food, armour and everything you may need to kill the level 111 Tanglefoot. Remember that you will have to use the Magic secateurs as your weapon.

13. Go to the southern part of Zanaris, near the Cosmic altar, and you will see a gap through the wall which you can squeeze through (yellow dots on the map below). Then, follow the tunnels until you reach the level 111 Tanglefoot in a chamber at the end of the tunnels. Fight it, and remember to wield the Magic secateurs at all times. 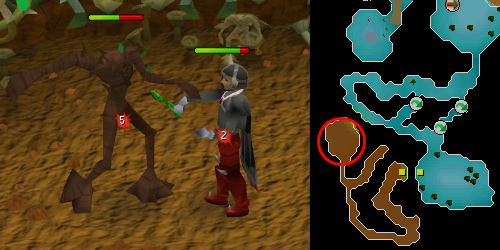 14. Once you kill the Tanglefoot, it will drop the Queen's secateurs. Take the secateurs back to Fairy Godfather to complete the quest. Congratulations! 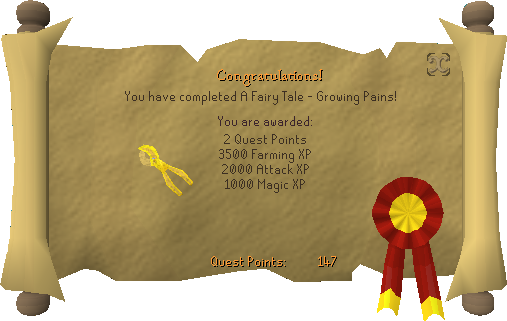