1. You will start off at the Canifis Bank. Walk to the Slayer master Machzna and then after that go off the trail (as shown by the purple line) and grab a nettle if you haven't already. (Note: MUST BE WEARING GLOVES OR ELSE YOU WILL BE POISONED)

2. After that keep walking along the path, eventually you will see the Fenkenstrain gravestones. This means you are on the right path. Keep going and then eventually if you follow the path shown on the picture you will see the zombie chickens. Kill 5 of them. The path you take to get to kill the chickens is shown by the yellow line.

3. Now go into the ectofunctus building (end of path on map) and talk to the Ghost disciple. He will teach you about the ectofunctus and how to use it for the best prayer training in the game.

4. Now go down the trapdoor (western part of the ectofunctus building, this is the red part on the map). 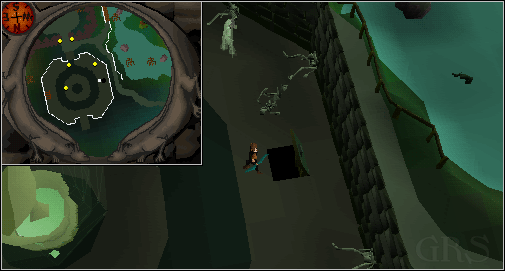 You will come to a circular room. Go to the other side and go down it. Keep doing this until you are at the bottom room. The bottom room is green and full of green stuff.

5. Once you have done that go up the staircase on the east side (this is the green part on the map).

Now go to the Bone Grinder on the north side. Now what you will be doing is getting your bones ready to worship for the ectofunctus. It only takes three simple steps per bone. 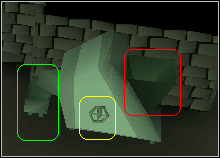 Keep doing that until you are done.

6. Walk back down with all of your supplies (5 buckets filled with ectofunctus goop, 5 pots with bones) and worship the temple 5 times. 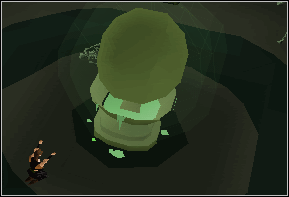 After you are done, talk to the Ghost Disciple and ask for your ecto-tokens. You should have 25 ecto-tokens since you did 5 worships.

7. After that walk to the gates and pay the toll of two ecto-tokens to get in.

8. Go to the ending part on the map. You should be at the house in Port Phasmatys City (the city south of the ectofunctus building). You need to talk to Velorina.

After you talk to her you should be able to start the quest!

9. Now you must talk to Necrovarus, who happens to be in the same building as the Ghost Disciple. (How convenient?)

Ask him to release the ghosts to the other side, but of course he says no. (If he said yes the quest would be over...)

10. Go pay 2 ecto-tokens to get past the gate and talk to Velorina. She says there's another way to accomplish the goal. Which starts the 2nd part of the quest.

1. First step is to make your nettle tea. First, you get your nettle and right click and use it with the bowl of water. Then add it with your bucket of milk. Then cook it on the only range in the area.

2. Now walk the path shown to you by the map. Go to the house and talk to the old crone. She unfortunately has no memory, but your nettle tea will bring back her memory. But she wants it in her special cup (which she gives you). So all you have to do is put the nettle tea in the special porcelain cup. After she drinks her special tea she gives you information on what you need to get. You need to get three things: A Translation Book, The Book of Haricanto, and The Robes of Necrovarus.

3. Now talk to her once more time. She will give you a model ship. Click "Repair" on it. This repairs it, making it look all nice and such, and you will be able to start the 3rd Part of the Quest.

Once you're on that floor, go up the ladder on the pirate's house.

2. When you go up that ladder, you need to look through the pole that shows you the windspeed.

When it reaches low windspeed (shown at the topright), look through the pole:

Everytime you do that you will find out the color you need for each part of the model boat (top, bottom, skull).

3. After you've found out what color your boat will be, you must color the boat those colors.

These are the possible colors:

Make the dyes, and then put the proper color onto the correct area.

4. Go down to the middle floor of boat and talk to the old man. Ask him if the model ship is his. And of course he'll say yes because you have dyed it perfectly. (If you didn't do it correctly he won't say it's his, and you'll have to figure out where you went wrong.) Then ask for the key, and you'll get it. Then use it on the chest and get your first map piece! 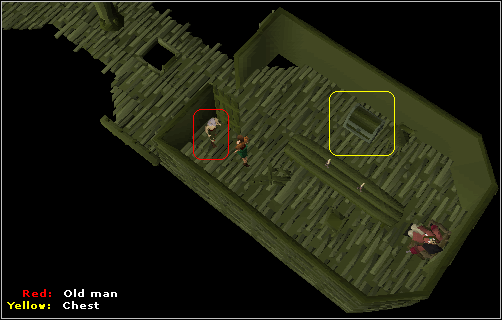 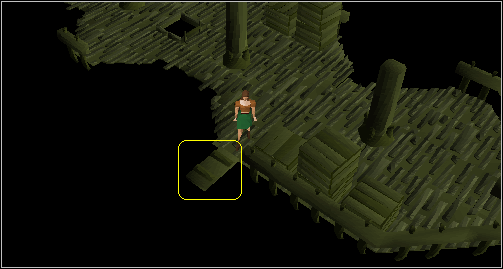 6. This is where your agility comes in. You are going to jump from rock to rock.

Eventually when you get to the end of the path you will get to the chest with the next map piece.

Now you have all three map pieces! Put them together and you get a map that looks like this (once clicked on). 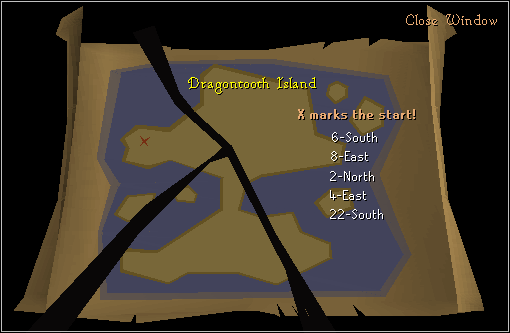 But we'll worry about the map later.

He's in the area shown on the map. He walks around so you'll find him that way. (Side Note: He also sells Bolt Racks for Karils Crossbow. The only place besides players where you can buy Bolt Racks.) Ask him for a translation book. He will give it to you if you give him a oak longbow signed by Robin. So obviously you gotta find Robin. (Its not like the Robin from Batman and Robin... more like Robin Hood, just if you were wondering.)

2. If you talk to Robin, he will say he won't give you an autograph. But (luckily) he'll ask you to a game of runedraw. So you of course say yes.

You must win four times before you can move on to the next part of the quest.

The game of runedraw is simple. Click "draw" and you just see what you get. Certain runes are worth certain points, the most points wins after five rounds. But, if a death rune pops up, the person who DIDN'T get the death rune wins. Once you get him to lose four times he will autograph the longbow for you. But every game you play you owe him 25 gp. And of course you don't get it back. Oh well, you are onto the next step!

The bow should look like this after you are done:

3. Go to Ak Haranu again and give him the bow, he'll give you the translation book.

4. Now go to the innkeeper at the Port Phasmatys Bar and ask for a job.

He'll give you a job and a bedsheet to be disguised as a ghost.

But you don't look anything like a ghost do you? So dip that into the ectoplasm pit in the ectofunctus building.

5. Now talk to Gravingas. He's the guy protesting in the village square.

Talk to him and he'll tell you that you need to get 10 ghost villagers to sign a petition against Necrovarus. (NOTE: You can't run while you're a ghost)

6. Walk around with the bedsheet on and ask people to sign the petition.

You will ask the ghost villagers:

But if they say no it'll look something like this.

Go back to Gravingas and tell him that your done with his task.

8. Now go to Necrovarus and show him the petition. He'll get mad and burn the petition. (aww) But you get lucky and he drops a very vital item to this quest... the bone key! Pick it up, and go back to the room where you grind bones. And now go to the room that was locked, use the bone key on it.

Search the coffin and you'll get the Robes of Necrovarus!

1. So now that your at the bank, we need to get 25 more ecto-tokens. And no, it's not because your out of ecto-tokens, but we need 25 more to move on. So go to the chicken spot (cyan) then come back and get your buckets full of ectoplasm (red) and grind the bones (green). After you're done with that, and then worshipping the ectofunctus, go back into the city and follow the yellow path.

2. Now you should have a good amount of ecto-tokens (odds are above 30). You only need 25 ecto-tokens though. Go to the Ghost captain in the small boat. 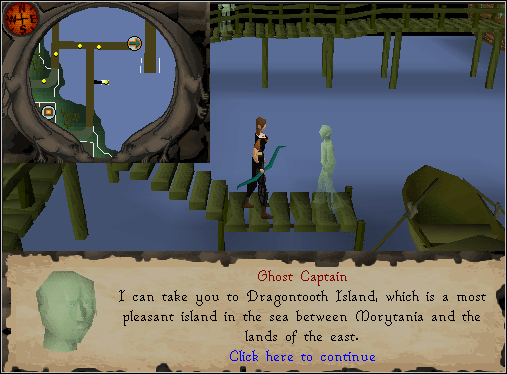 Ask him to take you to Dragontooth Island for 25 ecto-tokens. (NOTE: You need the spade AND the completed map)

3. Now your on dragontooth Island. Go west of the statue thats close to you. Once you have done that, click on your map.

It basically tells you where to start, and where to go. (And no, that X doesn't mark the spot of where you should start digging)

If you have done it correctly, dig on the spot after you stepped 22 steps south on your final step. You should get something like this. 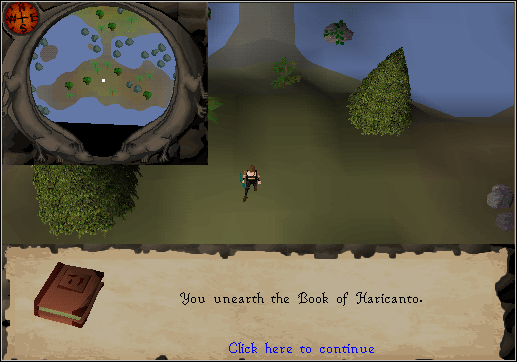 Now get off the island, we have better things to do then to stay on an island full of nothing.

1. Now go to the old crone again with the items listed above. She will get all three and you will get your ghost amulet enchanted.

2. Now go to Necrovarus with your handy enchanted amulet of ghostspeak. You will be able to command him to do three things. Only one of them is right.

The circled one is of course correct. And I tried out commanding him like a chicken... pretty lame. I thought it would be cool, but it wasn't. Just click on "Let any ghost who so wishes pass on into the next world."

Once you do that, he'll let you of course.

3. Now cross the gates (free of charge!) and talk to Velorina. She'll say some stuff, like this.

And then she'll give you an ectophial (a very good reward).

And then you will finish the quest! Congratulations!

How do I make red, yellow, and blue dyes? 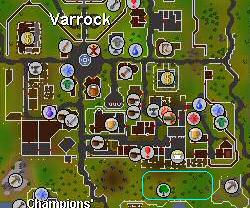