Speak to Manni the Reveller in Rellekka 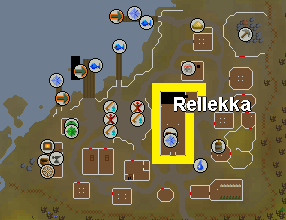 1. Speak to Manni the Reveller and he will ask you to help him with Brundt’s birthday party. He asks you to invite King Vargas of Miscellania and Mawnis Burowgar, the Burgher of Neitiznot. Speak to either of these people to find out that they’re both angry at Brundt and refuse to go to the party. Vargas can be found on the top floor of the castle on the west side of Miscellania and Mawnis can be found in the southwesternmost house in Neitiznot.

2. Return to Manni in Rellekka and tell him what happened. He tells you to speak to Brundt who’s also in the longhall. After a cutscene he’ll give you part of the directions to the cave with the monster in it. Talk to Vargas and Mawnis to get the remaining directions. 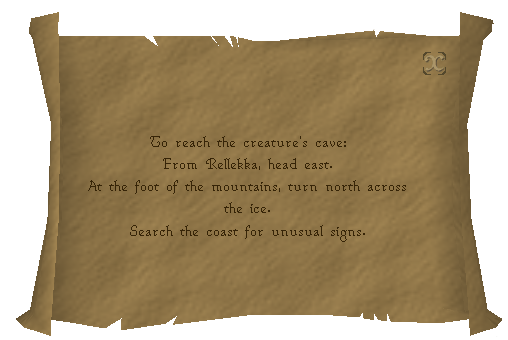 3. The directions point towards the snow hunting grounds northeast of Rellekka(use the fairy ring code DKS). Continue north up the steps and past the hunting expert. Follow the steps east along the coast until they end at an ice mound. Choose the option to dig in it.

4. Once you’ve dug a hole in the mound go down it. You’ll be in a room filled with snow monsters. Run south while using the protect against magic prayer and enter the tunnel to go to the next cave. Inside you’ll find a level 156 yeti. It uses a combination of attack styles so just wear armour with a strong range defence and pray against melee. Once you’ve killed it pick up ALL the items it drops. Exit the cave by either walking back through it to the snow hunting area or teleporting out.

5. Now go to Jatizso and speak to Freygerd. She can be found in the westernmost side of the city walking around near the gate and the smithy. She tells you she can’t afford to move as the king demands too high an emigration tax. Go speak to the king. He’s found in the building just west of the bank.

6. After making the king agree to not tax Freygerd return to her. Now go back to Neitiznot and tell Mawnis the good news. He agrees to go to Brundt’s birthday feast. Now head to the mountain camp east of Rellekka. Pick up the pole by the goat farm which is the northernmost house in the mountain camp. Then continue north along the path to the lake. Climb the tall tree, use the pole on the clump of rocks and use the plank on the flat stone. Listen to the shining pool to communicate with Asleif.

7. She explains to you how to make the cure for Vargas. Fill an empty vial from the spring and add a clean irit. Then crush the diamond root using a pestle and mortar and enchant it with level 4 enchant. Add the dust to the irit potion and then add the yeti hair to complete the cure. Go back to Vargas on Miscellania.

8. Speak to Vargas and give him the cure. He’ll turn back into a human and agree to go to the feast. Go back to Rellekka and speak to Brundt and he’ll remember what really happened and who stole the tablet. Now speak to Manni to complete the quest.