Starting Out
Head south of Canifis through the Mort Myre Swamp or use the In Search of the Myreque shortcut to the Abandoned Mine, southwest of Mort'ton. Talk to the (Saradominist) Zealot to start. It doesn't really matter which of the four choices you pick, just as long as you're not with Zamorak.

Into and Through the Mine
The Zealot tells you that inside the mine are crystals that have a "great power" over evil. However, not only is the mine sealed, but the crystals are guarded by a Zamorakian mage. If you ask him to borrow the key he has, he won't give it to you. Pickpocket him for the key. Time to head into the mines. Walk over to the mine carts, and climb over the one of the cart that is blocking the way to the cart tunnel. 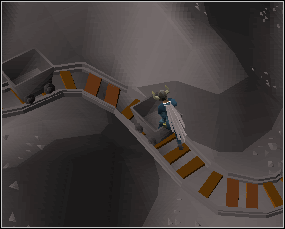 There will be a long track with a mine cart rolling up and down along the track, you'll have to get to the south side of this track. Use the spaces in the side of the wall to avoid the mine cart. If it gets you, you'll be pushed to the end of the track and take insignificant damage. Head down the ladder there. 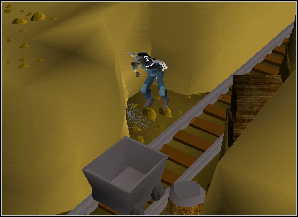 The Mine Cart Puzzle
Grab some of the glowing fungus there and head northwest until you come to a mine cart that you can "search". Use the fungus you just got on the cart.

Go northwest again and there will be a board on a wall called "Point Settings". This starts the mine cart and shows the settings on the different junctions on the track. Just east of it will be 5 levers, each linked to one of the junctions. Examine the levers and you can find out which junction they switch. There are also 6 more levers north of the board. Basically, you have to send the mine cart down the track without sinking it. 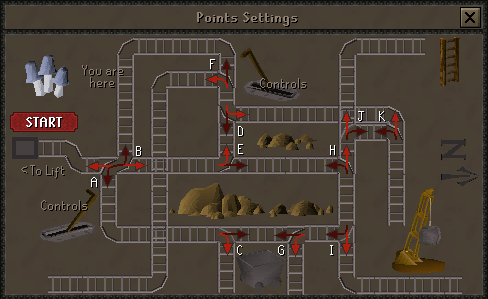 Through trial, error, and some good guesses you can complete this pretty easily, here's the correct path to save you some time: 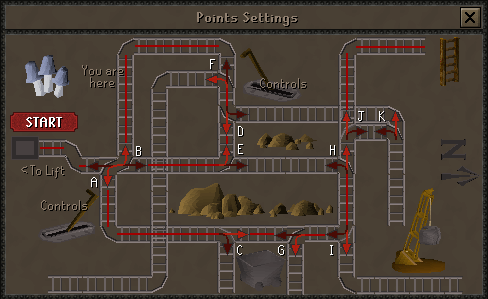 Flip switches B, C, and D. If your cart sinks before you get it right, grab another fungus and put it into the cart. If/when you did it right, your character will say "I wonder if the cart is anywhere useful now", or something like that. Head back up the southern ladder, past the cart, up the ladder, west and up that ladder, west again and through the tunnel, into the other tunnel, and down the ladder nearby. Go northeast and down the ladder there, and start heading west. Go down the ladder that is on the northwest side and the mine cart that you sent down the track will be there. Grab the fungus. Head back up and go to the eastern side to the down-ladder there. Careful of the mine cart though. No worries I guess, this one is pretty easy. 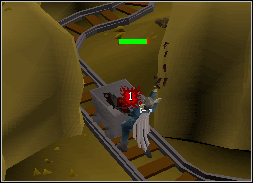 To the Crystals and their Guardian
Walk past the corpses there and keep heading down the corridor to a water pipe. If you didn't bring a chisel, don't forget to grab the one on top of the crate there; you'll need it later. Make sure you have plenty of run energy for this next part! Walk over to the valve that is next to the lift and use your key that you "borrowed" from the nice Zealot up above you. RUN over to the lift before that mischievous ghost gets to the valve to turn it off! With 30-50 run energy this shouldn't be much of a problem. If the ghost turns the valve off, head back and repeat the last step, with more run energy, of course. 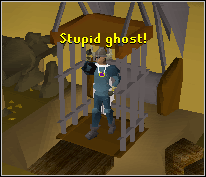 You'll come down into a flooded area and your character will swim ashore, you can go back up by clicking on the (flooded) lift. Start walking through the mine again. Note that if you take the "iron" (looks like steel) pickaxes that are sitting on the floor, a "Possessed Pickaxe", level 50, will appear in place of it. If killed, it drops an iron pickaxe. How surprising. Walk down the east end of the corridor and walk down the spooky stairs at the end. 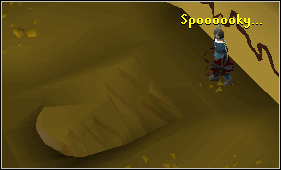 Since you did all that and have your glowing mushroom, you'll be able to see down here! If you don't have a glowing mushroom, do the puzzle part and get one! It's too dark to see anything here without a light source and too wet to light one. Walk over to the doors, be ready to fight that level 95 mage. Go in and grab the "Innocent Looking Key" that's on the chest there, and Treus Dayth, that Zamorakian mage mentioned earlier will appear.

The Final Boss: Treus Dayth
Treus will make the stuff such as pickaxes fly around to hit you for damage, and prayer doesn't work for this (hey, there's no "Protection From Flying Objects" prayer, get over it). He will also turn into a (level 99) ghost and float to the other side of the room, just run over and attack him again when he turns back into his normal, attackable form.

After he's dead, take the key. Run back up the ladder and to the other spooky stairs on the west side of the corridor. Go down these and with the help of your Crystal-mine Key, the former Innocent Looking Key, you can walk through the (locked) doors there. Run over to the purple crystals and cut one... 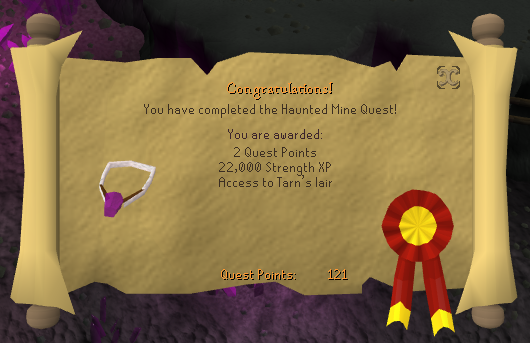